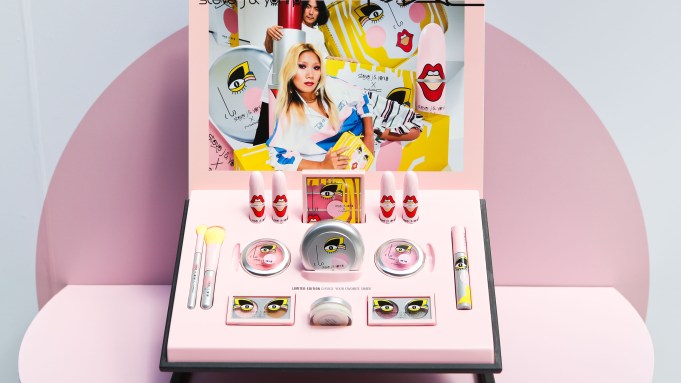 A crowd of well-dressed young South Korean women stood along the runway of the skateboard-park-themed show. They drew in sharp breaths and exclaimed “gwiyeobda” and “neomu yeppuda,” the Korean words for “cute” and “so pretty,” as corn-rowed models strode by in a variety of overalls, rompers, dresses, hoodies, blouses and jeans from Steve J & Yoni P’s almost all-denim SJYP diffusion line.

There was also another colorful, eye-catching element — makeup from MAC Cosmetics.

The event, which took place at a warehouse venue in Seongsu Station, an industrial area of Seoul, was also the launch for MAC’s latest limited-edition makeup collection with Steve J & Yoni P. It was also the cosmetics brand’s first collaboration with a Korean fashion designer.

“It was their idea that it would be a skateboard party,” he added about the  performance that took place on the runways on custom-installed skateboard rails and ramps minutes before the show began.

“Steve loves skateboarding….[It’s] part of street culture [and] also there’s the graffiti culture — that’s how we ended up with this evening that’s going to happen and those elements. Because that’s part of their scene,” said Ing.

The makeup line, which is composed of bright pink lipsticks, shimmery eye glosses, face powders, coral blushes and other items, are all embellished with images of a blonde-haired, winged eyeliner cartoon face, created by Steve Jung who said his cartoons were based off Yoni Pai.

“It’s inspired by her,” said Steve Jung looking at his partner. “Yoni, herself is the inspiration. I sketched her and made the designs.”

The couple, who are also expecting their first child, said they also created designed special invitations as a tribute to their favorite sport. “This time, we made [custom] skateboard invitations, and we gave them out as tickets,” said Pai. “Very big tickets.”

Similar to the makeup collection and the custom skateboards, the venue was also filled with spray-painted cartoon faces in hues of red, yellow, white, blue and Millennial pink — the fashion brand’s signature colors this season.

“We’re always looking for talent whether it be a designer or artist that has what we would say — a point of view about color,” said Phillip Ing.

The colorful makeup line will launch online on MAC’s web site on May 29 and will be available in select off-line shops by June 2. “The focus of it will be here in Korea and then selected global markets,” said Ing.

“You will find it predominantly in Asian doors again because this is more developed for Asian women. China, Singapore, Thailand, those are just a few countries.…[It will be] quite well-distributed in the Asia Pacific region and then select European and North American doors.”