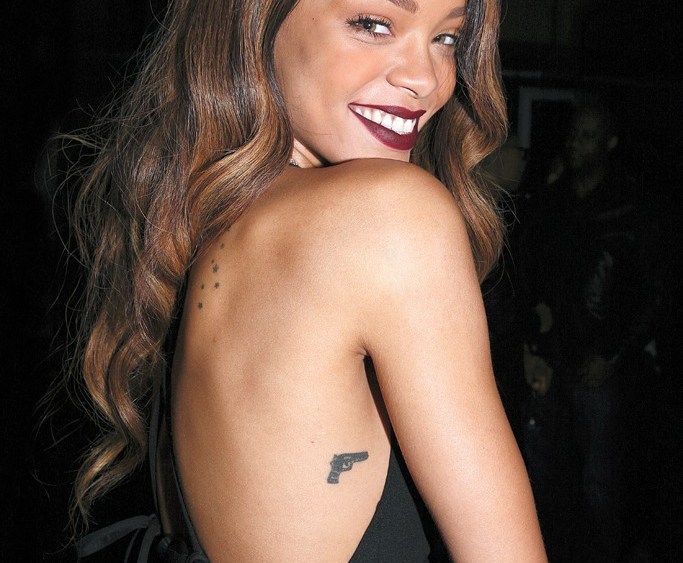 Sure, there’s the ongoing media fascination over her relationship with Chris Brown, but that’s counterbalanced by her Grammy-winning singing career, her new fashion collection with British retailer River Island and, now, a new, groundbreaking deal with MAC Cosmetics.

The only downside is all the media attention.

“The only thing the media really can get in the way of is my privacy,” said Rihanna — fresh from taking her runway bow in a cavernous former post office sorting space in central London after the Rihanna for River Island show last weekend. “Privately, yeah, it’s a pain in the ass, but at the same time they help me to get my message across. My creativity — I’ll never let anyone interfere with that — because that’s something I love. And if I’m not doing that, I’m wasting my time.”

The MAC agreement — which Rihanna called “a no-brainer” — will help her be even more creative. In an unprecedented deal for both, MAC and the Grammy winner have collaborated on multiple collections of color cosmetics that will roll out later this year.

The first product to launch will be RiRi Woo, a lipstick inspired by her favorite MAC red, Ruby Woo. Its release will coincide with Rihanna’s Diamonds Tour concerts on May 4 and 5 at the Barclays Center in Brooklyn, where MAC will open a pop-up shop on the first night to showcase the line.

“When you think of makeup, the brand that pops into your mind — for something legit — is MAC,” said the singer, who was dressed in a black, strappy, curve-hugging dress of her own design and matching Manolo Blahnik heels during an exclusive interview with WWD. “Whatever color you want, it’s like ‘Let’s go to MAC.’ I’ve been using MAC on tour for such a long time it was a natural fit for me. I have always loved makeup, and I always said that if I do it, I want to do it with a credible brand.”

Rihanna argues that creating makeup is no different from making songs — or clothing, for that matter. “Being creative is something that I love, so I can put that into different outlets. Music happens to be the first thing that I gravitated to, and now music opens doors to just so many different opportunities, and they all tie in. My makeup looks, my fashion looks…they help me to express myself as an artist. I think it helps people to understand me or my mood, my story.”

Although MAC has collaborated with myriad brands and celebrities in the past, this is the first time the brand has worked with a famous person for more than just a one-off project. “We always say that MAC likes to go on a date but doesn’t really want to go into a relationship,” said John Demsey, group president of the Estée Lauder Cos. Inc., MAC’s parent company. “This relationship with Rihanna is a long-term one that involves the development of four distinct color initiatives.”

The four collections, to be known as RiRi [Hearts] MAC, will break throughout 2013, and current plans call for 31 stockkeeping units. In another first, MAC is calling Rihanna, who turns 25 years old today, a “creative partner” rather than a collaborator. Her name will appear on the packaging, and her signature will be embossed on the RiRi Woo lipstick case and on the bullets of the summer lipsticks, as well as several of the fall and holiday pieces.

RiRi Woo will be sold at the Rihanna concerts and online, and a summer collection will follow, which will also be sold online. A third will land in brick-and-mortar stores for fall, and there will be an on-counter holiday collection.

The signature piece of the lineup, RiRi Woo, will be sold with all four collections. The summer collection also includes two additional lipsticks, a Lustre Drops shade and a powder blush duo. Fall’s 16 sku’s include four lipsticks, a deeply pigmented Lipglass version of RiRi Woo, two multishade eye shadow palettes and false lashes. (“She likes to wear two pairs at a time,” said Jennifer Balbier, MAC’s senior vice president of global product development, in an aside.) Holiday will bring another 10 items, including nail polish, a makeup bag and additional lipsticks.

Demsey stressed that the collections did not involve Rihanna slapping her name on generic product. “This was not a front,” he said. “This is a true, organic collaboration based on mutual admiration and respect. These four collections are like four tracks on a Rihanna compilation. Each one has its own vibe, look, special makeup packaging and flavor. This is really the convergence of pop culture, fast fashion, and iconic style and makeup,” he said, adding that he had been closely following the singer — with an eye to a potential deal — since she released her first single in 2005. “She’s a star. The world follows her look — how she wears her hair, her nails, her clothing, how she styles herself.”

While Demsey declined to discuss sales projections, industry sources estimated that the complete lineup could do $15 million at retail globally.

Mert Alas and Marcus Piggott have shot the campaign for the fall and holiday collections. “And that’s a #wrap on my shoot for my new #topsecret ad campaign!!!” the singer tweeted Jan. 27, sparking Internet speculation that she was doing a Chanel campaign, as she left the shoot wearing a Chanel necklace.

Seemingly everything Rihanna does makes news on an almost-daily basis — including her on-again, off-again relationship with Brown, her allegedly abusive boyfriend. When asked if that coverage was a potential downside for MAC, Demsey didn’t skip a beat.

“She’s a grown woman, and whatever makes her happy makes us happy. Life’s complicated. Far be it for us to judge,” he said.

Rihanna said she loved working on the collections — and even got her girlfriends involved. She said MAC gave her free rein with regard to packaging and colors, makeup textures and finishes, which she concocted with Balbier and James Gager, senior vice president and creative director of MAC.

“I really got to play,” Rihanna said. “There’s so much to choose from, and you can mix different textures with different colors and different greens in different eye shadows. I learned so much about the detail of makeup and what makes things look different. What makes it apply different is really important. Every little detail is important.”

Among those details were the rose-gold packaging, which will be used for her fall collection, and compacts in a pearly white with pink accents that will be used for the holiday collection. She said that one of the biggest surprises was seeing the result. “The package that we designed and the product that we created, to see it sitting there in your hand was kind of scary. It was like, ‘This cannot be real,’” she said.

Creating RiRi Woo was a particular challenge, she said: “Working with MAC, it’s difficult to get a red lipstick that beats Ruby Woo, because it works on every skin tone. I had so many different samples to choose from and so many different colors underneath — blue, yellow, orange and pink bases. And I got to pick one that worked, and I tried it on all my friends to make sure it worked on all of our skin tones.”

Balbier noted that Rihanna approached the task with a laser focus. “She wanted RiRi Woo to be slightly more blue-red and retro matte — a matte with moisturizer finish we’d used in a collection years ago and currently only have in one product,” she said. “She was especially adamant that the color be suitable for every skin tone.”

Gager was similarly impressed. “She could name all of our creative collaborations for years back and was pulling many of them out of a bag she brought to the meeting as she explained what she wanted in her collections,” he said.

As excited as she is about the MAC project, the entertainer is also reveling in her collaboration with the British high-street retailer River Island, a 120-piece collection for spring featuring sexy crop tops, hooded jumpsuits and skirts with high slits that will be sold through the retailer, and exclusively in the U.S. and Japan at Opening Ceremony.

“When it comes to creating things, I like to get my hands in there,” she said. “Tonight just blew my mind, it was like a dream come true. I mean, to have a fashion show in London Fashion Week. For this to happen so quickly was just sick. It was the same with MAC. I never thought I’d be able to create makeup with such a big brand so quickly at such a young age. It’s kind of sick to even say aloud when I think about it.”