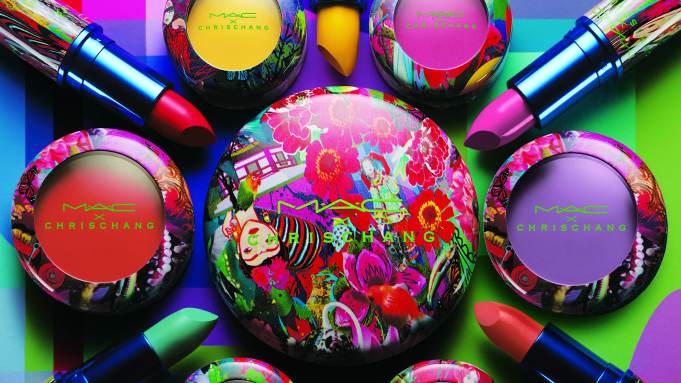 SHANGHAI — MAC’s collaboration with Chris Chang is a riot of acid-soaked neon to be unveiled at an event during Shanghai Fashion Week here this week.

The Taiwanese-born designer has a high profile in China having been featured as a judge on a design-related reality television show here, and is known for featuring wild patterns and color combinations in her own label, Poesia by Chris Chang.

“My clothes are imbued with a supercharged drama,” Chang said. “My designs are for women who are eccentric and confident. Color is the integral fuel of my imagination and the spirit MAC and I share. This collaboration is a dream come true for the maximalists of the world.”

The collection is made up of five lipsticks, priced at $20, a black eyeliner for $17.50, four shades of eyeshadow for $17 each, three cream color bases selling at $23 and a prep and prime transparent finishing powder for $29.50.

Following a fashion show and launch party in Shanghai on Friday, the collaboration will be available for sale at select North American MAC stores from May 12, and international stores, including in China, from June.

Talks between Chang and MAC began way back in 2012 and the final products in the collaboration are the result of painstaking working and reworking, with unusual hues — such as the turquoise of the Cloud Gait lipstick and lemon yellow Royal Woo matte eye shadow — eventually making the cut, alongside plum, neon orange and pastel pink selections.

Chang said she drew inspiration for the collection, as she often does in her creative life, from China’s history and ethnic minorities, with an imperial influence obvious in the collaboration’s campaign visuals.

“When I first met Chris, I was immediately drawn to her vibrant personality and quirky, colorful and quite girly aesthetic. It was love at first sight!” said James Gager, creative director of MAC cosmetics.