According to Facebook and Avon, Mark’s sales widget is a first for the beauty industry.

By Molly Prior on December 11, 2009
View Slideshow 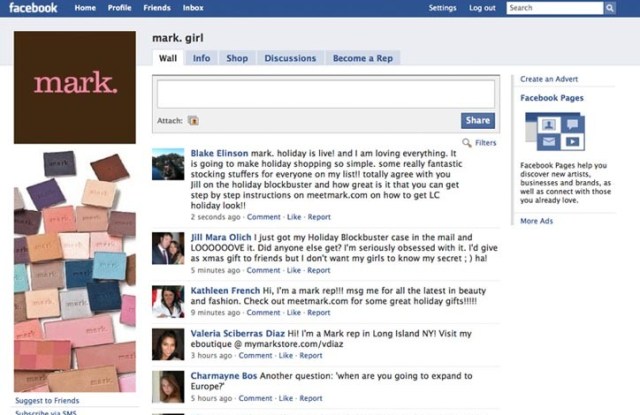 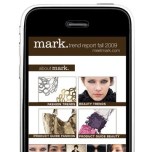 Mark, Avon Products Inc.’s flirty beauty and fashion brand for young women, has broken new ground in the virtual world by introducing one of the first digital social selling applications on Facebook. According to the social networking site and Avon, Mark’s sales widget is a first for the beauty industry.

The online tool, which launched on Nov. 19, allows members to socialize and buy products from Mark representatives without ever leaving Facebook. The selling platform was developed in partnership with Alvenda Inc., a Minneapolis-based technology firm that has helped other companies launch Facebook storefronts. Alvenda’s client 1-800-Flowers was the first to launch a fully functioning store on the site, said Wade Gerten, Alvenda co-founder and chief executive officer. Mark was the first to incorporate the social features of Facebook by allowing buyers to search their network of friends for a Mark representative.

A Facebook spokeswoman said 1-800-Flowers, which launched in July, was the only similar selling application she had spotted on the site. But sifting through Facebook’s 1.6 million active fan pages from companies is no small task. The spokeswoman noted that each day, 10 million Facebook members join companies’ fan pages. The fast-growing social networking site boasts 350 million members, up from 200 million in April.

Avon’s move to link online shopping and social networking ties into Mark’s larger strategy of infiltrating communication channels most relevant to the legion of 40,000 to 50,000 Mark representatives, who range from 18 to 30 years old.

The Facebook widget also helps Mark circumvent the same sales hurdle facing its mother brand, Avon: Unanswered doorbells. If successful, Mark’s viral effort could breathe new life into an antiquated business model of selling from a brochure, door to door, catapulting the Avon offshoot into a power player in the beauty world.

At a recent meeting with analysts, Avon — a more than $10 billion company — declared it planned to commit $50 million over the next several years to its social networking strategy, recalled Caris & Co. analyst Linda Bolton Weiser. While at the time the company was mum on details, Weiser said, “It certainly piqued the interest of a lot of investors.”

Stifel Nicolaus analyst Mark Astrachan said, “Avon doesn’t spend as much [as other beauty firms] from a marketing point of view,” adding the direct seller allocates about 4 percent of its revenue to advertising and marketing, which includes representative programs. “Avon needs to educate consumers a bit. Maybe Facebook is how you do it.”

The direct seller took its first stab at going viral in late August, when Mark introduced a free iPhone application on iTunes. The app makes direct selling more relevant to the twentysomething-year-old Mark representative. Rather than pull a wrinkled catalogue — or magalogue, as Mark calls it — from her bag, the rep can page through the brochure on her iPhone, said Annemarie Frank, Mark’s head of e-commerce and digital media.

The need to tap social networking become clear, recalled Frank, while scanning data on the effectiveness of e-mail blasts to representatives. “We found that e-mail blasts have a 10 percent open rate,” said Frank. Referring to Mark’s demographic, she said, “E-mail is a like dinosaur to them.” This crowd prefers text and online communities, like Facebook, MySpace and Twitter, emphasized Frank.

When Avon chairman and ceo Andrea Jung tapped Claudia Poccia in 2005 to run the Mark brand, she charged her with “reinventing direct selling for the next generation,” recalled Poccia, global president, Mark.

At the time, Mark was a two-year brand at roughly $70 million in size — and the age-old direct sales technique of traipsing through the neighborhood, ringing doorbells, had lost relevance, as many housewives had hung up the apron long ago to enter the workforce.

“Some 123 years ago, the representative would go door to door, geography to geography, selling to her friends and family — her social network,” said Poccia. “Mark is taking direct selling from door to door, to [Facebook’s] wall to wall.”

The shift, she added, “now positions Mark as a leading online beauty and fashion boutique.”

It also takes much of the effort out of the selling process. In addition to its efforts online, Mark issues 13 magalogues each year, distributing more than 100 million brochures annually.

To access the online boutique, Facebook members go to the Mark Girl page — where there are more than 81,000 fans — and click on the “Shop” tab, which reveals Mark’s virtual storefront. The widget currently features a photo of brand spokeswoman Lauren Conrad and Mark’s holiday gift guide. If the user places an item into the cart and proceeds to check out, she can then click, “Find a Mark Rep.” Once there, the user can choose to type in a friend’s name, who is a representative, or search for a representative by zip code.

“If you keep them on Facebook, they are more likely to follow through on the action you want them to take,” said Frank.

Facebook members who sell the brand can post a Mark badge on their profile page, alerting Facebook friends to their business. Friends who click on the badge will be brought to that representative’s e-boutique.

Mark’s e-boutiques, online stores customized by representatives, have existed since 2007, and the technology also is available to Avon’s sales force. An Avon representative based in Manhattan said at her district meeting, held Tuesday evening, an Avon employee encouraged the reps in attendance to host e-parties online.

“Our rep is our store owner and our customer,” said Poccia. “She has to have a voice and be able to customize her business. Anything short of that is unacceptable.”

Rachel Martino, a 19-year-old student at Belmont University in Tennessee, became a Mark representative about a year ago, and likes to run her business using low-tech and high-tech levers.

“I find new customers in two ways: I threw parties, pass along the magalogue and keep some inventory for people to see, and I also have a link [to the e-boutique] on my Facebook page,” said Martino. She said since posting the link to her personal Mark store URL on Facebook she has seen an increase in customers.

Mark and Alvenda soon plan to introduce additional iterations of the technology, some of which extend beyond the virtual borders of Facebook and its more than 350 million members. Before year’s end, Mark will allow Facebook members to create wish lists and share them with friends through the site’s news feed. Friends can click on the product and buy it without leaving their homepage, said Gerten of Alvenda. Early next year, Mark representatives will be able to create offer lists — or product promotions — that also will pop up in friends’ news feeds, appearing as a small dialog box. “It’s a push approach versus a pull approach,” said Gerten.

To make the e-boutiques portable, and move them beyond the confines of Facebook, Mark and Alvenda plan to introduce shoppable advertisements that appear as banner ads on the 250 most visited Web sites, said Gerten.

“That’s the linchpin,” said Poccia of the “shoplet” technology, in Alvenda speak. Referring to the benefits of e-boutiques, Poccia said, “One of the things this target audience loves is they don’t have to collect money or deliver product.” Offering a glimpse into future applications, the company believes at some point representatives will be able to post an e-boutique where they blog, on their MySpace page, and perhaps in e-mail form.

These viral applications are also being looked at by the company’s flagship brand, Avon. “Mark has a lot of early adopters. We are out there in front, of course, but this is something we are doing for the enterprise,” said Poccia.

The technology, created with Alvenda, is not proprietary to Avon.

Also, Google’s new pronouncement that it will be supplementing its search engine results with updates posted each second to blogs and social networking sites, like Facebook, bode’s well for Mark’s viral effort.

“Part of our charter is to be constantly relevant and find out what’s next,” said Poccia. “This is a breakthrough in our journey.”