The mineral cosmetics brand is hoping to bring consumers into its world of technology-meets-naturals with its first store. 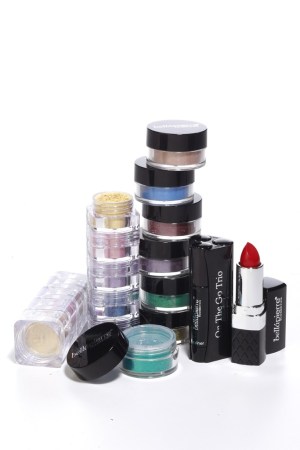 Mineral cosmetics brand Bellapierre is hoping to bring consumers into its world of technology-meets-naturals with its first store, a 685-square-foot space, in Valencia, Calif., which will open its doors next week.

“It’s all about colors, very bold colors and discovery,” said David Orencyr, managing director, adding that plans call for 12 new locations in the U.S. and Europe over the next two to three years. “We see the store as very futuristic. We want to communicate the fact that it’s a modern take on makeup.”

According to Orencyr, the outpost on West Valencia Boulevard will feature five 40-inch LED screens and four personalized makeover stations as well as pop-up merchandising units throughout the store, customized for clients’ ease when purchasing. In addition, approximately 60 colorful lights on the ceiling are meant to reference the brand’s ample collection of Bellapierre Shimmer Powder colors.

“We wanted it to be very different, a place that would make [a consumer] want to walk in and check it out,” said Orencyr. “Our goal is to bring consumers the most extensive color range, quality and purity in this category.”

All 250 Bellapierre products — including foundations, lipsticks, loose powder pigments and select skin-care products — will be available to purchase at the outpost. Later this year, the brand will add Brow kits, a Travel Essentials Kit, a six-in-one Beauty Box and BB creams to the lineup. Prices range from $15 for a nail polish or loose eye shadow to $105 for a serum and $175 for a cosmetics starter kit.

“Bellapierre is based in innovation and still keeping true to the product being natural and versatile,” said Orencyr. “My desire was to introduce natural color cosmetics that are pure, good for your skin, hypoallergenic and in their purest form without the fillers used in the industry.”

According to Orencyr, one of the line’s hero products, Shimmer Powder, available in an ample array of vivid hues individually or in a nine-piece stack, can be used as cream eye shadow, lip liner, lipstick, lip gloss or temporary hair color, depending on the medium it is mixed with. “The color will not crease because there are no fillers,” said Orencyr, adding that the product is made up of just two or three ingredients.

The brand was launched in 2005 in London at salons, spas and boutiques with the goal of offering “bold, innovative, bright” shades of mineral makeup. “We’re about reinventing naturals into a more trendy, popular product,” said Orencyr, adding that Bellapierre sponsors shows during London Fashion Week. Sold through retailers like Galeries Lafayette, House of Fraser and Whole Foods Europe, the brand appeared on QVC in August 2009.

“We entered the U.S. [the brand officially launched in the U.S. at Cosmoprof in 2011] with a very small-scale production,” said Orencyr, adding that he has his sights set on New York, London, San Francisco and Milan for upcoming store locations. “We grew little by little to the point [where] we decided to take a step forward with our own store.”

After generating more than $6 million globally in 2012, industry sources estimate that Bellapierre’s first brick-and-mortar store could add more than $250,000 in sales to the overall business by the end of 2013.