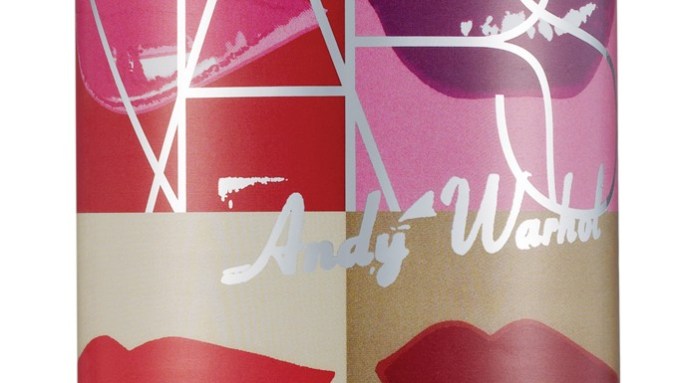 Andy Warhol will live this fall at cosmetics counters, courtesy of François Nars and a multichannel color cosmetics effort that marks his brand’s — and the Warhol Foundation’s — largest collaboration to date.

Why Andy Warhol? “Why not Andy Warhol?” Nars, founder and creative director of the brand that bears his name, countered to WWD. “I have always surrounded myself with Andy’s work and even paid tribute to him in my past collections — Edie Eyeshadow, Chelsea Girls Lip Lacquer, etcetera. This just seemed like the right time to do [a bigger effort]. Even more than 20 years after his death, Andy continues to be one of the most influential figures in both contemporary art and pop culture. Andy said, ‘If everybody’s not a beauty, then nobody is.’ This is the same sentiment I wanted to bring to life with Nars — a forward-thinking attitude toward beauty, and the encouragement to inspire self-expression, creativity and artistry in the women who wear it. It seemed like a natural fit to create a collection that Andy himself might have a hand in if he were alive today.”

Warhol has been a longtime inspiration to Nars. “I first discovered Andy’s work from Andy Warhol books my parents had when I was maybe 12 or 13 years old,” said Nars. “I remember being so drawn to the colors — so bright and graphic. I loved the painting of Marilyn Monroe, his silk screens, the movies, the photographs and the Polaroids.

“His artistic point of view has always been so informative in my career as a makeup artist and as a photographer. Beyond that, I like to think there’s always been a connection between us. His sense of humor, and the way he approached art, is something I think we share. He didn’t take himself too seriously. I love that he had so much humor and brought so much joy to his art.”

The overall Nars Andy Warhol Holiday Collection is split into two offerings: one a Sephora exclusive that launches Oct. 1, and a separate lineup for department and specialty stores, which will launch Nov. 1.

Sephora’s collection is intended to be an ode to Warhol’s Pop Art, and as such is vibrant and colorful, noted Louis Desazars, chief executive officer of Nars Cosmetics. Debbie Harry Cheek and Eye Palette, a $65 item, is inspired by Warhol’s 1980 paintings of the Blondie vocalist and includes new shades and a new diamond dust formula. Kiss Mini Larger Than Life Lip Gloss Coffret, $55, features five new lip glosses — Silver Factory, Drella, Chelsea Girls, Blue Movie and Myths — in a soup-can container emblazoned with Warhol’s lip print. Walk on the Wild Side, a $39 set, includes a silver illuminator, a mini It nail polish and a mini Orgasm Larger Than Life lip gloss. Three eye shadow palettes — Flowers 1, Flowers 2 and Flowers 3, each $55 — comprise all new shades, and each compact has a Warhol quote selected by Nars inscribed on the mirror.

The department and specialty store offering is intended to capture the spirit of Warhol’s Silver Factory — downtown, black and white, with the edgy energy of the screen tests and the color of the silk screens, noted Nars. The $200 Silver Factory set includes the Silver Factory Multiple, a new shade; new shades of Shadows Trios; Chelsea Girls Pure Matte Lipstick; Desire Blush; Via Veneto Larger Than Life Long-Wear Eyeliner, and a large domed eye shadow brush and blush brush. The $75 Edie set, named for Edie Sedgwick, is in a film canister emblazoned with a shot from one of the actress’ original screen tests with Warhol. It includes Film Star Pure Matte Lipstick, Edie Eyeshadow, Carpates Eyeliner Stylo and Deep Throat/Amour Blush DuoShadow. Beautiful Darling, $49, is named for the well-known transgendered actress Candy Darling, one of Warhol’s most prominent muses and the star of his films “Flesh” (1968) and “Women in Revolt” (1971). It contains Candy Darling Nail Polish, Femme Fatale Duo Eyeshadow and Woman in Revolt Larger Than Life Lip Gloss in a makeup bag with an image of Darling from the documentary “Beautiful Darling: The Life and Times Of Candy Darling, Andy Warhol Superstar.”

The $35 Photo Booth set is a mini nail polish lineup with new shades named Back Room, Soup Can, Chelsea Girls and Silver Factory. Three different eye shadow palettes — Self Portrait 1, Self Portrait 2, Self Portrait 3, each $55 — offer new shades and Warhol quotes selected by Nars on the compacts.

A 16-item holiday color cosmetics collection will be sold with both the Sephora collection and the department and specialty store offering. The collection includes five nail polishes, each $18; Satellite of Love Highlighting Brush, $28; 47th Street Larger Than Life Long-Wear Eyeliner, $23; four Soft Touch Shadow Pencils, each $24, and five new Larger Than Life lip glosses, each $26.

Nars said he especially loves the Flowers and Andy Warhol Eyeshadow Palettes. “I’ve never seen anything like them before, with the color going all the way down to the bottom of the pan,” he said. “Andy’s quotes on the mirrors tie in with beauty so perfectly — I couldn’t not include them. We also worked with Fabien Baron, who did a great job on the design of the special Nars Andy Warhol logo lock-up and packaging.” The secondary packaging was rendered in silver and black, and all palettes and gift sets will include mini face charts that show consumers how to wear the colors and a leaflet insert that speaks to the Nars and Warhol partnership.

The initiative is the largest licensing effort done to date by the Andy Warhol Foundation for the Visual Arts, said Michael Hermann, its director of licensing.

The limited-edition initiative is the first of a series of Nars strategic collaborations. “We are planning several collaborations throughout the 2013 and 2014 calendar,” said Desazars. “These strategic collaborations are a way for our brand to build brand equity and establish a deeper emotional connection with our customers. They also help us to differentiate our position as a high-fashion, high-style brand. The Thakoon for Nars Nail Collection collaboration that launched this past spring 2012 was a perfect example of that.”

In total, the overall offering — both Pop and Silver Factory — will be sold in about 1,300 doors globally. Executives declined comment on projected sales, although industry sources estimated that the limited-edition collections could do $15 million at retail in their time on counter (until the line has sold through, which will likely take about three months).

“François shared his personal passion and admiration for Andy Warhol and his collection of work — and emulated his vision into a gorgeous collection of vibrant colors and wearable palettes,” said Margarita Arriagada, senior vice president of merchandising for Sephora. “We were honored to be able to offer it to our Sephora clients first, as we knew they would respond positively, not only to François’ amazing products, but to holding a piece of wearable Warhol as well.”

The retailer plans to promote the collection via windows with Nars’ photography, and its makeup artists will offer complimentary consultations using looks from those photos. “The Sephora windows are themed Pop Goes Sephora, which focuses on Warhol’s well-known, bright and colorful silk screens,” said Desazars.

Sephora will also share how-tos and behind-the-scenes moments with Nars on sephora.com.

“When we were introduced to the Nars Andy Warhol Holiday Collection at market, the whole team erupted in delight,” said Deborah Walters, senior vice president and general merchandise manager for cosmetics, fragrance and intimates at Saks Fifth Avenue. “We all knew that our Saks Fifth Avenue customer would love the innovative concept, exciting use of color and fun packaging. The collection brings a stylish edge to holiday gift-giving, and who wouldn’t want an Andy Warhol Self Portrait eye shadow palette?”

Nars has also created a landing page on narscosmetics.com to link to a microsite, narsandywarhol.com, allowing its customers to be the first to receive details about the collection, noted Desazars, adding that an extensive digital media campaign and in-store events are also part of the promotional plans.