The rules of the game for beauty firms have changed. 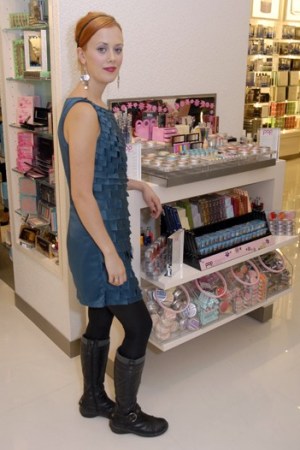 The rules of the game for beauty firms have changed.

The beleaguered economy has intensified the David and Goliath predicament many emerging beauty companies face as they work to grow their presence at retail and their bottom line. To make matters worse, Goliath — in this case, department stores — is ailing and often in no shape to add brands to the mix, as it works to prune inventories. A number of retailers are ordering a more limited assortment of products, making it difficult for an emerging brand to adequately introduce itself to consumers. For beauty companies, the new set of economic realities — contracting consumer spending and a climbing savings rate — has heightened the need for stop-the-shopper-in-her-tracks innovation and a firm balance sheet, said industry watchers.

“From a retailer’s prospective, we’re hungrier than ever for new and innovative ideas,” said Claudia Lucas, senior vice president and general merchandise manager of beauty for Henri Bendel. “If you have a compelling story and product, there are opportunities in the specialty space.” She also declared that many retailers have sharpened their response time, a trait that Bendel’s has long prided itself on. “If we see something good we can jump on it,” said Lucas. For instance, recently after meeting with makeup artist Mike Potter, founder of Knock Out Cosmetics, and surveying his company’s ultramatte nail lacquers called Flatte, Lucas had the Black and Powder (white) shades in the store the following week, taking full advantage of the percolating press buzz. “We’re increasingly agile and we move quickly. If I see something [Thursday], we can have it in the store on Monday or Tuesday.”

Bendel’s has been the launching pad for a host of now-established lines, namely MAC Cosmetics in the U.S., Trish McAvoy, Kevyn Aucoin Beauty and Benefit Cosmetics. In Lucas’ view, the surest path to success is an involved creator. “Trish McAvoy used to come to our store and peddle her products. Nobody is more passionate about the brand than the creator,” said Lucas.

In good times, “There were no barriers to entry” said Jani Friedman, a managing director of the Demeter Group, a boutique investment banking firm, adding beauty start-ups could simply link arms with a contract manufacturer. “But all those brands aren’t going to make it.”

Citing Euromonitor International data, Friedman said the U.S. beauty industry totaled $51.3 billion in 2007. Euromonitor forecasts that figure will drop by $1 billion to $50.3 billion by 2012. Friedman is advising her clients to tap into key trend areas, namely natural, cosmeceuticals or ethnic-focused product; partner with the well-positioned retail partners, including direct-to-consumer and specialty on the prestige side and in mass, drugstores, and to look at expansion strategies through a financial lens.

Below, a handful of smaller-size beauty firms, each of which cater to different segments of the market, share with WWD how they are navigating choppier seas.

Tria Laser Hair Removal System was rolling out to retailers just as the floor fell out from under Wall Street in mid-September. Tria, the first handheld, at-home laser hair-removal device cleared by the U.S. Food and Drug Administration, came with a high price tag of $995. Last month, it was lowered to $795. Referring to the price point, Drake Stimson, executive vice president of sales and marketing for Tria Beauty, said, “Certainly, everyone was initially concerned about the price. The consumer is still buying, but she has to be more confident than ever before about product benefits.”

He said on the beauty floor of Bergdorf Goodman, brand executives have noticed that many women introduced to Tria return a few weeks later to purchase the device. “Her decisions are taking longer. They are more considered.”

Stimson said the economy has not put a crimp on research and development, but acknowledged it has changed the way Tria goes to market and reaches the consumer. “In the old economy, we would have looked at doing print ads in beauty books. Now we are taking a closer look at our product benefits and the role they play in consumers’ lives. We are doing programs that are more insightful and relevant,” he said. To that end, in late February, Tria inked a deal with swimsuit designer Ashley Paige, and is looking to collaborate with more emerging designers. “Tria offers a body beauty benefit…our product allows you to enjoy their product more,” he said.

Reflecting on the economic hurdles, Stimson said, “We as an industry have always talked about the importance of differentiation and product benefits. These things were always important, but the reality is today they are the difference between thriving and not making it through tough times.”

Tria, which is owned by a number of venture capital firms, is available in about 60 doors, including Bergdorf Goodman, Studio at Fred Segal, Bliss and on QVC.

Suki Kramer, president, founder and formulator, has broadened the reach of her eco-conscious beauty line from the natural market to the more luxury tier, hosting trunk shows at Henri Bendel and courting boutiques like Space NK. Last year, the brand grew by 50 percent to reach about $4 million in wholesale sales. It also upped its door count to 600 from 500. “We are in the growth phase of our development,” said Kramer, who earlier this week launched her line in select Harvey Nichols stores, and this month will begin rolling out to Boots in the U.K. Kramer, who owns the company, acknowledged, “I am cautious when thinking about new products and investments.” She is redesigning the Suki color cosmetics range, shifting to more purse-friendly sized compacts and improved formulas. Asked how she gauges an investments’ return, she said, “Initially, I go with my gut and with what consumers want most. That’s how I originally launched the brand and that’s what I think is true entrepreneurship: creating something that doesn’t exist. Clean makeup is something that people are clamoring for.”

Kramer said she has seen retailers decrease their orders. But as the wholesale business has dipped somewhat, Suki’s e-commerce business has grown, offsetting the decline in retail orders. As for what consumers are buying, Kramer said, “They are buying treatment products for conditions, like rosacea and aging. People are buying what they really need and what is vital, especially for the face.”

As a privately held company, Kevyn Aucoin has not reacted aggressively to the downturn, said president and chief executive officer Cheri Murray. Isidore Aucoin, the father of the late founder, is the majority shareholder of the brand, which expects to reach $3.5 million in wholesale sales this year, up from $3 million in 2008. Murray, who helped launch Bobbi Brown in the Nineties, stressed Kevyn Aucoin Beauty is focused on maintaining limited distribution, and is currently sold in about 131 domestic doors and 29 international doors. In September, it rolled out to 30 Sephora doors, and is in talks with a department store retailer. Murray acknowledged tightened credit markets have affected everyone. The brand also felt the brunt of the woes of one of its retail partners, namely Neiman Marcus. “Neiman Marcus’ turmoil last fall has had an impact. No one is exempt,” she said. “Right now there is a lot of supply and very little demand.” She said the brand is working to further strengthen its relationships with retailers and suppliers. “If one shuts off, everyone will feel it…everyone is working through these times. It forces you to analyze your business,” she said. The brand ­— which also is sold in Bergdorf Goodman, Henri Bendel and on Beauty.com — has ramped up its inventory as it has expanded distribution and is gearing up for spring and fall launches.

If retailers want innovation, Pop Beauty founder Sara Strand says she has got plenty. She’s quick to point out the line’s tag line is “Shakeup Your Makeup.” The Swedish-born makeup artist launched her line in London in 2002 with the aim of “bridging the gap between ultra high-end and very new and low-end, low-quality makeup.” She said, “I wanted to bring back the fun, but still keep the quality.” Pop, owned by Strand’s older sister and makeup entrepreneur Petra Strand, entered the U.S. in 2004 and established a headquarters in Los Angeles this year. The brand now generates $7 million in wholesale revenue across about 400 doors in the U.K. and U.S.

Here, the line is sold on QVC, in Ulta and in CVS Pharmacy’s upscale beauty concept called Beauty 360. “It’s a great concept,” said Strand, referring to Beauty 360. “CVS is somewhere you wouldn’t normally go for niche, exclusive brands. But Beauty 360 feels completely different than the CVS store.” In her view, the laggard economy gives Pop a “great leap ahead” because of the brand’s price points. Upcoming products include the $26 Face Magnet Primer and the $32 Clutch Collection, or kits of coordinated colors for eyes, cheeks and lips.