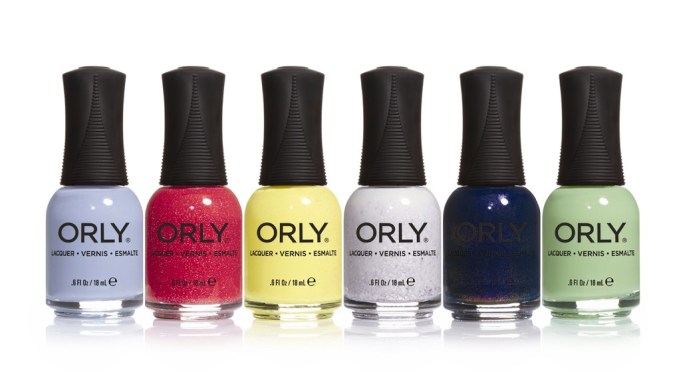 Orly has an independent streak — and is ready to show it off.

While its nail polish competitors OPI and Essie were busy being bought by Coty Inc. and L’Oréal USA Inc., respectively, Orly remained on the acquisition sidelines and turned its attention inward, investing in a major rebranding initiative to strengthen its position in the professional nail market. Orly founder Jeff Pink is confident the rebranding, which introduces a comprehensive new look for the brand for the first time in its more than three-decade history, will ignite close to 30 percent growth this year to bring Orly’s revenues to roughly $80 million. “We are very aggressive,” he declared.

It all started in 2009, when Orly’s senior vice president of marketing, Carina Breda, previously director of marketing at Wella, came on board and informed Pink his brand should undergo a serious examination. “I am very research driven. I believe in data. When Jeff hired me, he hired me for that reason. He prides himself on being an entrepreneur and very creative. I was pretty scared because I thought that for 30 years he worked without me, without research and number crunching,” said Breda. “It can be a dangerous thing for an owner, but I’m very proud of him. He said he wanted to go that route. He wanted to know who we are and what the competition is.”

Pink plunked down around $120,000 to learn what nail-product consumers, professionals and distributors thought of Orly. After workshops and focus groups, German market research firm Sturm und Drang concluded that consumers thought Orly was “approachable, like your best friend, someone who is your confidant,” explained Breda. Those qualities were terrific, she continued, but Orly also wanted to be considered a nail color authority. “Our goal is to definitely come across as more sophisticated, more modern and contemporary,” said Breda.

Orly’s “O” logo and its cap were getting in the way of the messages it wanted to communicate. In the years after Orly’s launch in 1975, the letter “O” had become ubiquitous in corporate branding, used by everyone from Oprah to Overstock, and Breda lamented, “It’s not modern enough.” Orly’s patented gripper cap was practical — the rubber material makes bottles easy to open — but its gray color didn’t provide a great contrast with the nail polish shades Orly sells.

Orly has excised the “O,” and its logo is simply the brand name in sharp capital letters. Gone as well is the gray dimpled cap. A black cap with grooves is in its place. Wording on packaging and displays communicates clearly what products are and what they do, but extraneous verbiage has been eliminated. Product displays have been redesigned from harsh, industrial iron, which Breda described as too severe and masculine, to acrylic and white modular units. “We decided that we wanted open, white space. We decided less is more,” said Breda.

Pink wasn’t sentimental about the look Orly has left behind. “When you are running a company and you have business, you do something when you feel it. The guts tell you that. That’s what happened here. We used a lot of sophisticated techniques, but at the end of the day, you look at what you feel strongly about,” he said. “We went through a lot of revisions, and we strongly believe that with this new logo, this new black cap and packaging, we are going to gain huge market share.”

Pink noted that Orly’s market share currently ranks second in the professional nail market, behind OPI but ahead of Essie and CND. Nail treatment products, where Orly established itself early on with breakthrough products such as the primer base coat Ridge Filler and the rubberized base coat Bonder, account for 25 percent of Orly’s sales, with the remainder from polishes. In the last four years, Orly’s average growth rate has been in the 20 to 30 percent per year range, according to Pink. To help match or exceed that growth rate this year, Orly is projected to spend $2 million on raising awareness of its rebranded products with consumer advertising, which it hasn’t done since the Nineties.

Orly’s growth — and the growth of the nail category more generally — has attracted suitors. A few years ago, Pink mentioned L’Oréal showed interest in acquiring Orly. “I said to them, ‘The company is not for sale. It’s my baby. I don’t want to sell my baby,’” he recounted. “They told me clearly that, ‘If you are not going to sell, we are going to go on to the next company.’ I knew what they meant by that. They bought Essie.” Does Pink regret turning down L’Oréal? “Not at all,” he asserted. “That was about four years ago, and my company today is twice as big as it was then. There is more value to my company today than there was ever before, but, still, I’m not going to sell the company. I love what I’m doing.”