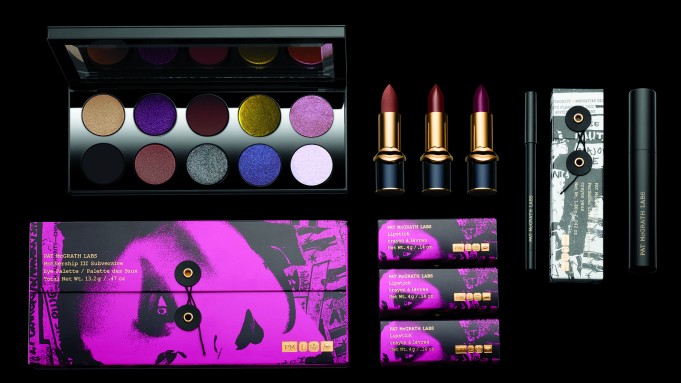 NEW YORK — For those who weren’t quick enough to get their hands on any of Pat McGrath Labs’ limited-edition products — largely launched at random and following no specific retail calendar except the whims of founder and chief executive officer Pat McGrath — something more permanent is on the horizon.

Next month, McGrath will introduce an “unlimited” core collection of color cosmetics under her Pat McGrath Labs label, a much-anticipated first for her brand. The rollout will take place at patmcgrath.com in two stages, starting at midnight on Sept. 16 with 40 shades of lipstick in two finishes, followed by the release of lip liner in 11 shades, eyeliner in five shades, a mascara and an eyeshadow palette that comes in three colorways on Sept. 28. Sometime this month, although she won’t give a specific date, McGrath will hold a “secret” pre-sale for subscribers to her site who will get an e-mail invite to shop at patmcgrath.com before the official launch. On Oct. 6, the range will enter 25 Sephora doors and sephora.com, the brand’s exclusive retail partner.

“A lot of these colors are my all-time colors for the last 25 years…[you can] shop my archive. I can say, ‘This was the palette when you saw me do a tan and a bronze for Versace.’ I re-created shadows that I had to make to get that beautiful, rich seductive brown or that incredible metallic gold pigment that doesn’t exist unless it’s made out of eight different formulas,” McGrath told WWD Monday afternoon at a suite at the Gramercy Park Hotel here, dramatically removing a black, silk sheet covering the new collection — the first time she showed the line to anyone outside of her team.

After spending a laborious two years in the development process, McGrath will unveil her “24/7” range, which is composed of five products and 61 stockkeeping units in the eye and lip categories. Nine MatteTrance and 31 LuxeTrance Lipsticks will retail for $38 each, five shades of PermaGel Ultra Glide Eye Pencils and 12 shades of PermaGel Ultra Lip Pencils for $25 each, Dark Star Mascara for $28 and Mothership Eye Palettes for $125.

During a two-hour interview, McGrath went over nearly every shade in the range, using her fingers to test and swipe about 30 hues of eye shadow on the backs of her hands, wrists and up her arms.

“Now we move onto the next diva,” McGrath said, picking up the Mothership Eye Palette in Subversive: Obsessive Opulence and dipping her finger into “Gigabyte,” a subtle metallic green, and “Night Creature,” a purplish red pearl. “This is where you want to let go and create. It provokes creativity. You want to create and have fun with color; it’s funky but decadent. This kit, I’d say is Paris at 1 a.m. or 2 a.m….or 3 a.m.”

Besides being maniacal about creating formulas with pigment loads that meet her standards, McGrath was meticulous about packaging. All outer packaging, as well as eye palettes, are affixed with four gold seals — a hallmark for the brand inspired by the London Assay office — that include a “PM” for Pat McGrath, an “L” for labs, a crown and a lip, eye or eye with a lash line  graphic corresponding to the category. In addition to the seals, her Mothership Eye Palettes have beveled mirrors and slick, mirrored brass undersides with six lines of engraved text that reads, “Pat McGrath Labs, Mothership, Use without caution, Shade throwing and eye ecstasy, May result with prolonged use, MMXVII.” Dramatic names have also been assigned to the three, 10 shadow compacts — Subliminal: Ritual Rebellion; Sublime: Iconic Illumination and the above Subversive: Obsessive Opulence — where colors range from nudes to saturated golds and metallic blues, greens and pinks.

A permanent collection is a departure from the makeup artist’s existing business, which was founded on the “limited-run” retail philosophy where demand always trumps supply. To achieve this, one has to drum up buzz on social media, typically on Instagram, by teasing newness in the days and weeks leading up to a release (participation and cross-promotion from influencers optional). The desired result: thousands of units of a single item selling out in minutes. And to date, the makeup artist has excelled here, with seven product “drops” that have instantly sold out, becoming virtually impossible to get (unless on eBay and with an inflated price).

McGrath, along with Kylie Jenner — who unveiled her now signature Kylie Lip Kits in a similar manner one month after the makeup artist — have pioneered a new way to build a beauty brand. One that’s born online with the majority of distribution remaining direct (or in Jenner’s case, 100 percent), coupled with strategic wholesale partnerships or branded pop-ups to support an overwhelmingly online business.

And while the model has proven fruitful for McGrath, she’s ready to scale. The makeup artist wants to build a fully realized beauty brand that’s bigger than a single product launch. She promised that limited-edition items and kits will continue to drive a portion of the business, but broadening her range allows for limited-edition and permanent ranges to coexist and support one another. If one uses Jenner’s success here as an early indicator — the 20-year-old’s combination of limited-edition products and a permanent collection is on track to do $386 million in sales this year — experts believe McGrath could be on the road to amassing sales in the triple digital millions in just a few years.

McGrath declined to comment on sales figures, but the launch is an ambitious one, with an industry source projecting that Pat McGrath Labs could do as much as $60 million in retail sales within the first 12 months of the rollout of the core collection.

“All along I’ve done about five makeup lines that I’ve put away because they’ve looked like everyone else’s. I wanted to do something authentic,” McGrath said, adding that she was in the lab working on her now MatteTrance Lipstick when gold pigment Gold 001 “happened” by accident.

“I was making this line and as I went into the labs looking for gold, I saw a gold that looked amazing. I knew if I left that formula I’d never see that again…[so] I reformulated and tweaked it to be amazing. “When you see a gold like that, if you’re launching it [your line] in two years, it will be gone. So I said, ‘I’m doing it now, I want to release it now,’ and ran back to my office,” she continued.

This was the beginning of Pat McGrath Labs, which for her became a vehicle to bring concepts to market with a rapid turnaround. For instance, Gold 001 was conceived in August 2015 and went on sale by October of that year. This is an impossible feat for the legacy brand, McGrath pointed out, reveling in the freedom that having her own company permits.

She noted that Gold 001, which if not for her site crashing due to the hundreds of thousands of people trying to access it, would have completely sold out of all 1,000 units in six seconds (the glitch brought sellout time up to 6 minutes and 6 seconds).

While the majority of her business comes from to direct-to-consumer sales on her e-commerce site — and will continue to do so —  a select retail presence is key to expansion. The brand’s first two launches, Gold 001 and Phantom 002, were sold only at patmcgrath.com, but since the third item — the Lust 003 highlighting kit — Sephora got in on the action. Today, Sephora remains the only retailer that carries Pat McGrath labs, with door count more than tripling with the addition of the core collection from seven doors to 25 doors come October.

“I’ve worked on so many brands and designed so many makeup lines, and as I’ve always said, a lot of things look the same. There had to be a point of difference,” McGrath said, which for her, spans formula and inner and outer packaging — the latter of which became a collaborative process.

Many founders claim that their fans are part of the creation process, but with McGrath, the statement really holds true.

She turned to social media to source the art emblazoned on all outer packaging, which has a button and string closure that conjures the opening of an envelope containing classified documents. Drawings of things like giant pink lips bordered in gold pigment with gold teeth or sequin-covered eyelids are printed on each of the cardboard boxes housing lipsticks, eyeliners, lip liners and eyeshadow palettes. More than 10 “InstaArtists”(@enzo_donatelly, @iroillustrations, @turqblu, @desiree_mattsson, @lilyduk, @artaksiniya, @c.illustrations, @astridxvos and @csteien among them) were hand-selected by McGrath, who said she came up with the idea after being inundated with paintings and sketches based on her makeup looks, many via direct message on Instagram.

“A lot of it was work that was sent to me, literally the next day after a fashion show…or when an editorial came out, I’d see it. I get hundreds. I write to them personally, [and] some I’m in contact with,” McGrath said, adding that the artists still don’t know that they’re work is being featured on her packaging. “They know it’s being used for something special, but they don’t know what,” McGrath said.

McGrath, notoriously vague about future plans, would only say that “new categories are to come.” When pressed further, she revealed that products for complexion, including foundations, are in the works.

“It takes time to reach the perfect shade and formulations. That’s something that’s in the science. The lipstick, to make a matte that feels like heaven, is unheard of,” she said. “To make a matte feel like that but have the color and full pigment — that was work. That was a lot of work.”

For More From Beauty in WWD: