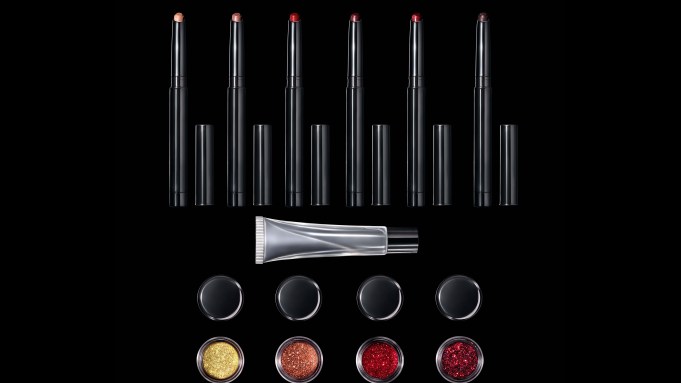 Glitter is the hero of Pat McGrath’s latest creation.

The makeup artist and global creative design director at Procter & Gamble, who admits she “comes from a land of extremes,” has just dreamed up what she thinks will be beauty’s next must-have lip trend: an uberpigmented, matte lipstick topped with ultrafine glitter.

“When people wore glitter before it was tons of eye makeup. The modern way to wear glitter is with bareness. That’s what makes it so fresh,” McGrath said during an interview, during which she unveiled Pat McGrath Labs’ Lust 004, her foray into lips. “It’s [about] a bare face, a modern, bare face with mascara and brow control and a touch of Skin Fetish [McGrath’s highlighter that came out in April] and a divine jeweled lip.”

She showed how her lip sets, composed of five products that could be mixed, matched and layered to achieve varying finishes, colors and intensities, bring editorial and runway beauty trends to the consumer. Each kit — available in Version Flesh (nude), Version Vermillion Venom (red) or Version Bloodwine (purple and deep red) — comes with two matte lipsticks; a clear, high-shine lip gloss; saturated gold pigment, and a glitter pot.

McGrath said she only creates things she is obsessed with and right now it’s glitter. Lust 004 was born from the glitter lips she conceptualized for Atelier Versace’s couture show in July.

She explained the inspiration and how to apply the new range, and for most, it might seem unlikely that her vision will be able to make it from runway to the lips of regular people. But it’s more versatile than one would think. As demonstrated by a group of three models, who each wore a different colored lip and the corresponding finely ground glitter, the look, while definitely a statement, is not reminiscent of a child’s arts and crafts project.

Customers can wear the matte lipstick solo, paint on the corresponding glitter or layer the clear gloss on top of both for optimal shine. A saturated gold pigment could be mixed with the gloss to impart a metallic sheen (to be worn solo on a bare lip, with the matte lipstick to create a high-gloss finish or as a finale step over the glitter) or painted delicately on one’s cupid bow as a lip liner/highlighter hybrid.

Each kit retails for $60. For those not ready to toy with glitter and gold pigment, each of the six matte lipsticks are sold separately for $25. Additionally, a package of all three kits retails for $150.

Each makeup artist’s releases is a singular launch — Lust 004 will be McGrath’s fourth — and it’s very deliberate. Only 25,000 units of Skin Fetish 003 were produced, with the same quantity made for Lust 004, which hits patmcgrath.com at noon Eastern Standard Time on Aug. 30.

McGrath, who is releasing her second product in less than four months, is carefully building a business predicated on a new “cult beauty product model” that is fueled by social media. Similar to Kylie Jenner, McGrath manufactures a product in limited quantities and introduces it to the public via Instagram, where her account @patmcgrathreal has 881,000 followers. She invites her fans to shop it at her e-commerce site. Unlike Jenner, though, McGrath has partnered with Sephora, which will introduce Lust 004 on Sept. 8 in 10 select doors and on sephora.com — while supplies last, of course.