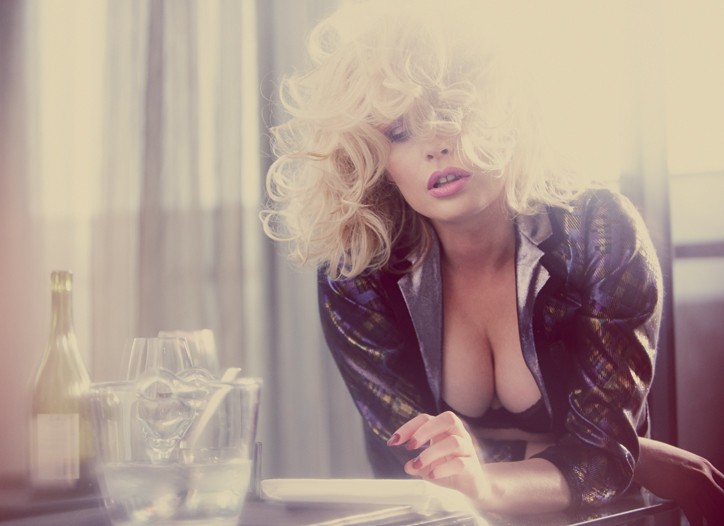 By its very nature, the job of makeup is to camouflage, conceal and create illusions. Unless you’re makeup artist Dick Page, with the eye of a cinematographer, the soul of a painter and the forthright attitude of someone who grew up in post-punk new wave Britain, where jobs were scarce but creativity rife.

For Page, makeup isn’t a mask. It’s a revelation. “I never erase the face and start over,” he says. “Even when I do something strong, you still recognize the person.”

That attitude informs all of Page’s work, be it his editorial collaborations with photographers such as Juergen Teller, Inez Van Lamsweerde and Vinoodh Matadin, Philip Lorca Di Corcia and Mario Sorrenti for magazines like W, Vogue (U.S., French, and Italian), Visionaire and V. It’s also the prevailing notion he wished to convey in this story, in which WWD Beauty Biz gave Page free rein to create a directional story for spring beauty. Rather than choose a young girl new to the modeling scene, Page requested to work with Annie Morton, who shot to fame in the Nineties as Teller’s muse and with whom Page is both a close friend and a colleague.

“It’s difficult for me to think about a cosmetics idea on someone who is basically a child,” he says. “I’m not crazy about anonymity in fashion or beauty or the fact that we work with very, very young models because they’re supposed to have the ideal body. They’re like ciphers,” he continues. “Bless them, but I don’t really understand it as an esthetic.”

Page’s own esthetic is based on the color principles and painting techniques that he learned as an art student. He defines his technique as “loose”— “There’s no single process,” he says. “I make it up as I go along”—and takes as his inspiration the world around him, most recently a painting by Edward Burne-Jones called The Sleep of King Arthur in Avalon, which he saw on exhibit in England.

Page’s big break came in the early Nineties, when he was asked to do the makeup for a Calvin Klein show. He had come to Klein’s attention via his work with Kate Moss and the young British photographers Corinne Day and David Sims. “It was my first fashion show. I had no idea what I was doing,” he laughingly remembers. “I was really, really well organized because I didn’t know what to do. We were ready two hours before the show.”

The makeup for that show consisted of some lipstick on the lips and cheeks and a swipe of Vaseline on the eyes. It helped usher in a new, naturalistic look that took the style world by  storm. “It was more luck than judgement that I happened to be working with those people at the time,” says Page of his meteoric rise. “We had just passed the period where things had been very glammy, very done, so this was a change. It looked very new and very different.”

A burly man who today is wearing jeans, a flannel shirt and a battered Helmut Lang leather jacket, Page speaks in a low tone in quick staccato sentences. A fashion world favorite (his show roster includes Marc Jacobs, Alexander Wang, Michael Kors and Narciso Rodriguez, among others), he isn’t afraid to speak his mind about the circus surrounding today’s runway extravaganzas. “You have to be able to do your job, but backstage you’re fielding 500 different interviews and camera crews,” he says. “There’s something really insidious and weird in the way that models have become celebrities and celebrities have become models. You’re trying to get a girl out of hair into makeup and someone is interviewing her,” he continues. “I don’t want to put the girls down, but they’re being paid to do the shows. They don’t have to tell you how much they love the clothes.”

To that end, Page himself has no desire to go the celebrity makeup artist route (“I don’t like  the idea of being the figurehead and having my mug plastered all over everything,” he says), preferring instead his role as artistic director of Shiseido’s makeup range, overseeing product development and color creation. He’s been charged with revamping the line from the ground up. Named to the role in March, 2007, Page’s debut effort is currently launching, a 20-shade lipstick range called Perfect Rouge, to be followed next fall with eye shadows. He works out of a studio in New York, putting together mosaics of color swatches that are dispatched to Shiseido’s Japanese labs. As creative as he is, Page is also a keen student of the commercial. “There’s no point in doing it if no one buys it,” he says. “It’s never going to be a pure art.”

True to form, though, he’s doesn’t shy away from making bold statements. Take the very vivid fuchsia Page developed for Perfect Rouge, which has strong undertones of blue. “Fuchsia tends to be softened with red or brown. This one is very clear and hard core and it’s getting great editorial reaction,” he says excitedly. As of-the-moment and ephemeral as the nature of his work is, Page has set his sights clearly on the long term. “I’m evolving the line so that it’s  comprehensive and useful for many different women,” he says. “Beyond color, I know what makeup should be like, how highlights should work on skin, how blush colors should work, how foundation should look. I don’t believe in trends per se and I can’t respond to trends.”