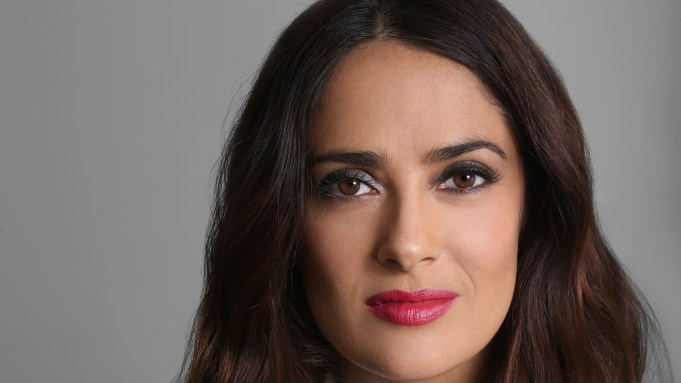 Salma Hayek is a movie star who talks like a chemist.

For someone who is well accustomed to the red carpet and the silver screen, she clearly loves to dish about the down and dirty business of picking ingredients for beauty formulas.

That is just what the CVS Pharmacy chain needs as Hayek attempts to jump-start a key portion of her brand that she and the retailer co-created in 2011.

The color cosmetics segment of the treatment-oriented Nuance Salma Hayek brand is being replaced by 37 new stockkeeping units, which are due to be rolled out to a distribution of nearly 5,000 doors by March.

The improved cosmetics dimension is expected to elevate the whole brand and give CVS new leverage in its competition with other retail chains that are brandishing their own exclusives.

Hayek’s love of ingredients was on full display during a recent product preview in which she described each item not only in terms of benefits but with an eye firmly on the nuts and bolts.

Take the lipstick, for instance. It contains green tea and mint designed to boost the circulation and therefore pumps the blood, she pointed out. With help from fillers, there are fewer lines in the lips, Hayek maintains. “We have many other ingredients that not only are pumping but that are actually moisturizing the lips like a very strong lip treatment, much more than a lip balm,” she asserted. “It’s not just emollients; it’s actually a mask for the lips, like a treatment.”

She tends to describe even makeup as something that cares for the skin.

Speaking of other products, Hayek said, “They are all treatments for the skin that also make up your face.”

In addition to the lipstick, the caring quotient extends to concealers, “and even the eye shadows. Sometimes we don’t think so much about that part of the skin but [the product] still has chamomile and argan oil. The concealers for under the eyes have vitamin A, vitamin B, vitamin C, they have ginger and green tea. I have a special technique that covers the dark circles. It’s not just the color. There is a special technique.”

The hotel presentation room was decorated with inspiration boards showing important ingredients. Apparently her favorite is tepezcohuite, which is a key ingredient in her creams. The natural ingredient is extracted from a tree bark and used in her native Mexico to treat burn victims in hospitals “because it’s the strongest regenerator of skin cells.”

“You can get it only in the market in the witchcraft stands where they sell all the herbal medications that are coming from shamans and specialists in Mexican herbology.”

As an actress, Hayek has plenty going on — a romantic comedy, “Drunk Parents,” with Alec Baldwin opens next month; three other movies are in development, as are “a couple of television shows, one with HBO,” and an Italian art house film, called “Tale of Tales,” directed by Matteo Garrone, is set to open on April 22.

But on the day of the product presentation, standing before a roomful of young beauty editors and dressed in a Gucci outfit with an Yves Saint Laurent hat (both part of the Kering luxury group overseen by her husband, François-Henri Pinault), the 49-year-old Hayek reeled off claims, tips and tricks with the ease of a backstage makeup pro.

Hayek said she is painstaking in her approach to formulation, and she admits she didn’t have enough time to focus on that in terms of the color line  when Nuance came into being. The brand was originally conceived as a skin and hair care range. Those products tested so well, Hayek said, that it was decided to add a color cosmetics collection late in development. “We didn’t have the time to continue the philosophy behind the rest of the line, which is in the ingredients, and also the packaging was rushed,” she said.

Hayek did not disclose what effect this had on sales, but according to market observers, the color line appeared to lag behind the skin care. CVS declined to provide a sales projection for the new Nuance color collection. But industry sources estimate that the new makeup range could do $12 million in retail sales during its first year on counter.

Cia Tucci, vice president of store brands and quality assurance at CVS/pharmacy, said, “There’s no problems with the existing platform. The platform that took off earliest was face care. We spent a lot of time in that space really making sure that we were listening to the consumer and developing products kind of at the same place at which she was seeking them.

“We really need to spend that same time on the cosmetics line and bring that really special part of Salma’s story, the ingredient piece, to the cosmetics line,” Tucci continued. “We have the opportunity to do that now. “

As for the sales productivity of the existing Nuance platform, Tucci insisted, “It’s doing great. “We would not be putting the resources and effort into the innovation pipeline if it wasn’t.”

Nuance ranks number one among CVS’ exclusive brands, which include the highly successful Makeup Academy, she said. “That exclusive space is what’s probably growing the fastest in our stores and the media space. And it’s really helping for us to identify with our customers and [provide] more brands and accessible value to her and really demonstrate CVS Pharmacy as a beauty destination.”

She was seconded by Helena Foulkes, CVS Pharmacy president and executive vice president of CVS Health, who said earlier this month that the company is looking to drive larger baskets and build incremental sales. Beauty is a big part of that effort.

CVS has been giving the beauty department a makeover with touches evident in stores over the past two years, such as woodlike decors, more premium skin care, additional service and a focus on exclusives like Makeup Academy. Foulkes said in the past year, CVS has “elevated” its cosmetics wall in 4,500 stores. “The enhanced cosmetics wall is more inviting, with hot spots to show her colors and new trends,” Foulkes said. “We’re stepping up the facial-care look and feel and we’re dedicating endcap space to beauty elevation in our top stores.” This new look is said to have contributed to a 3.7 percent increase in beauty and personal-care sales in those remodeled stores.

Hayek’s improved color line will be repackaged as well as reformulated. The 37 new skus — the original foundation has been retained in the line — include eye shadows, a cream concealer, moisturizing lipstick, brow pencil, cream illuminators and shadow sticks.

The eye shadows contain argan oil and a blend of silicone-infused mineral pigments designed to make them glide on the skin smoothly and blend. The brow pencil features a formula containing chamomile and phytosterol ester to also ease application. The cream illuminator duo has gardenia and tepezcohuite to tone and condition skin and reduce inflammation.

“My grandmother used to make creams,” she continued. “I started noticing that some of the things, the natural things, were just as good [as pricey commercial creams]. I started doing some research and I realized that sometimes those $1,000 creams are made for $10. It made me very sad that women who could not afford it couldn’t have access to something that should have been affordable because of the nature of the ingredients. And then sometimes they start marketing things like gold and caviar, which are very expensive to get.

“They are not better than tepezcohuite,” Hayek declared. “They will not regenerate better [than that or other ingredients in the line]. I wanted to make the best possible cream that could exist that everyone could afford because I believe that every woman should be entitled to preserve their youth and beauty regardless of how much money they make. However, the funny thing is that in the culture that we live in, people sometimes feel that if you don’t spend a lot of money, it’s not good.”