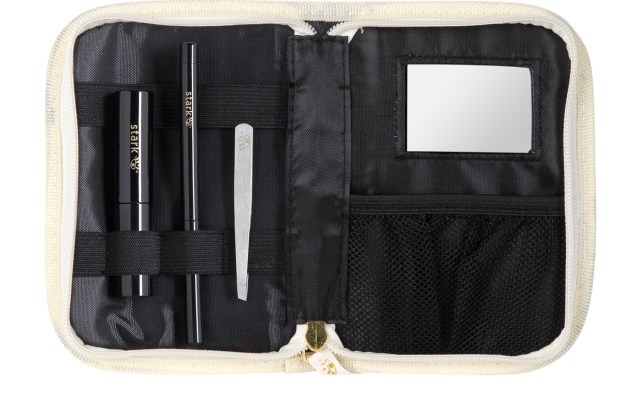 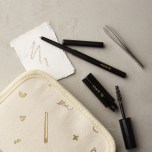 If you don’t care if your eyebrows are fully on fleek, but would like subtle upkeep, Stark Frontier may be the answer to your arch issues.

The brand, which recently entered retail distribution at Anthropologie with the Essential Eyebrow Kit, isn’t afraid to break down brow maintenance to its low-key basics. Priced at $34, the kit contains a retractable eye pencil with a sharpener at its end, clear eyebrow gel and mini tweezers packaged in a canvas pouch, and is the beginning of a broader beauty range from Stark Frontier.

“This was a response to what I feel was becoming a lot of clown makeup. I’m not a makeup artist. I wanted to give a different take on what brows can be. You don’t have to be an expert or spend a ton of time,” said Paz Stark, founder of Stark Frontier and three-unit Stark Waxing Studio. “Explore your own beauty identity. Don’t have someone tell you have to put on certain face. My approach to beauty is about doing it on my own terms, and I want to be the brand for people to do beauty on their own terms.”

Stark Frontier is the outgrowth of products Stark started developing for her waxing studios in West Hollywood and Silver Lake, Calif., and New York. She created soy candles and roll-on perfumes before two years ago dabbling in eyebrow items. “We have been doing brows for 10 years and we see, between the three locations, let’s say 1,500 people walk through the door in any given month,” Stark said. “With the no-makeup makeup idea in mind, we wanted to do something that wasn’t fussy or intimidating.”

In the kit, the retractable pencils come in two shades: light-medium and medium-dark. “The texture was really important to me. It’s not too thin or too thick. I had gone through a lot of textures in my research that were way to thin and chalky, or way to creamy that made you have to commit to way too much color,” Stark explained. Continuing about the gel, she said, “It’s really hard to find a clear brow gel in my opinion that doesn’t make things too stiff. This brow gel isn’t too stiff or too watery.” Rounding out the kit, the mini tweezers are convenient and portable. “Everyone one of my friends as well as myself can attest to bringing tweezers around with them in their car,” Stark said.

With the retractable eye pencils in the process of being perfected, Stark reached out to Anthropologie in the spring in the hopes of breaking into its stores for the holiday season. Meanwhile, Anthropologie was expanding its beauty departments and was on the hunt for emerging beauty brands to stock. In parent company Urban Outfitters’ fourth-quarter earnings call in March, chairman, president and chief executive officer Richard Hayne disclosed Anthropologie installed 70 beauty in-store concept shops last fiscal year and planned to rollout 60 more this year.

It only took two phone calls with Anthropologie to secure Stark Frontier’s matriculation into its locations. “They’re probably excited about working with a new company with a fresh voice,” Stark reasoned. “I’m coming to it as a woman in my 40s who loves the beauty space, but wants to love it in her own way and not in a way that takes a lot of time, skill or money. We are all spread thin.”

Catherine Moellering, general merchandise manager for beauty at Anthropologie, called partnering with Stark Frontier a dream. “The Anthropologie customer loves something unique that is not only practical but also beautiful,” she said. “Paz’s expertise in brow shaping is well known throughout the industry, and she brings that same knowledge and high quality of care to Anthropologie with the Essential Eyebrow Kit. Easy to use and packaged beautifully, it is a perfect addition to our growing assortment of beauty tools and sure to be a customer favorite.”

Stark presaged Stark Frontier’s push further into beauty merchandise, particularly focused on the eyes. “It’s great quality stuff that’s not too precious that you can use everyday, but that are buildable for when you want to have a little pop or to be darker or bolder for going out at night,” she said. “I’m not Nars. I’m not Chanel. I love those brands, but we are not about extreme face makeup. I always look for that neutral look with some shine.”