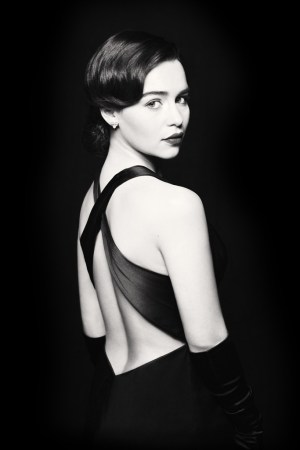 Target’s Bull’s-eye is coming to the Great White Way.

The retailer has partnered with the upcoming play “Truman Capote’s ‘Breakfast at Tiffany’s,’” by Tony Award winning playwright Richard Greenberg, to provide the makeup and hair looks for Holly Golightly, a character made famous by Audrey Hepburn in the 1961 film version. Target tapped its beauty partners Sonia Kashuk and Umberto Savone to bring the iconic look of Golightly, who will be played by Emilia Clarke of HBO’s “Game of Thrones,” back to the Forties, the original setting of the novella. The pair worked with the Academy Award winning costume designer Colleen Atwood to retool the beauty look.

“I had to switch decades,” said Kashuk, a makeup artist who sells her namesake cosmetics range exclusively at Target, recalling that her mind immediately veered toward Hepburn as the New York society girl. Kashuk sought to create a “very fresh, elegantly refined, classic face” that focused on highlighting beautiful skin. On the skin, she applied a bit of Perfecting Luminous Foundation mixed with illuminator, and shaped eyes with strong brows and neutral shadows. She smudged a dark hue along the lash line from the Eye on Neutral 12-pan shadow palette — purposely avoiding the winged eye of Hepburn’s Golightly. On the lips, she applied a berry red shade, and lightly contoured cheeks with blush. Kashuk — an avid theatergoer who attends shows two to four times a month — enjoyed the collaboration. “It’s like being part of a band.”

In this case her fellow “bandmate” was Savone (known simply as Umberto) whose hair care line Umberto Beverly Hills is also exclusively sold at Target. Umberto said he created a style that nods to the finger wave of the Forties, but with a more modern turn. He used the Umberto Beverly Hills flatiron to create a wave that begins at the top of the head, softly frames the brow and skims the ear. The hair is then tied back with plenty of pins. To give the hair shine, he worked in his Roman Oil Serum and finished the look with Shimmer Shine Spray.

Katie Erickson, vice president, category marketing at Target, said the beauty look will be featured in the play’s promotional materials, as will Target’s logo. The retailer is currently drafting a social media and event-based strategy to fete the partnership. She said both Kashuk and Umberto will provide beauty tips at the play’s opening, slated for March, at the Shubert’s Cort Theater.