Space NK’s eclectic assortment of brands have been a hit in the U.K. for 15 years. 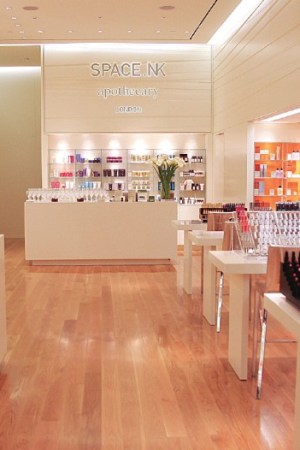 Space NK’s eclectic assortment of brands have been a hit in the U.K. for 15 years, but company president and founder Nicky Kinnaird still calls the British-based emporium “the new guy on the block” in the U.S., where it now operates 13 stores, including nine shop-in-shops at Bloomingdale’s.

NEIL GEORGE INDIAN GOOSEBERRY TREATMENT OIL
This contains Indian gooseberry, which is rarely used and is packed with antioxidants. This particular oil makes hair look incredibly smooth and high gloss if used before blowdrying, and enables someone at home to get sleek shiny hair without having to pay for a professional blowout. $42

LIPSTICK QUEEN BIG BANG THEORY ILLUSION GLOSS
Poppy King has mastered the perfect ratio of shine and shimmer to create the illusion of plump lips by playing with light reflection. This is quite unlike other lip plumpers in that it doesn’t sting or cause an allergic reaction to make lips swell. $20

SPACE NK LAUGHTER SOLID PERFUME COMPACT
We’re taking our iconic signature fragrance, Laughter, and introducing it this spring in a solid alcohol-free compact, which makes it perfect for travel and on exposed limbs. $45

BY TERRY SÉRÉNITÉ DE ROSE RADIANCE RENEWING MASK
This restores freshness and radiance to tired and dry skin and it smells amazing. We’re seeing an increased interest in home treatments as people don’t want to pay for a dermatologist or facial but still want to see the same effects. $82

NIA 24 SUN DAMAGE PREVENT 100% MINERAL SUNSCREEN SPF 30
Customers who don’t like sunscreen always complain about the white residue that it leaves on their skin, but this blows their excuse sky high. It doesn’t leave a white film, is non-oily and works as a great base for makeup. $45