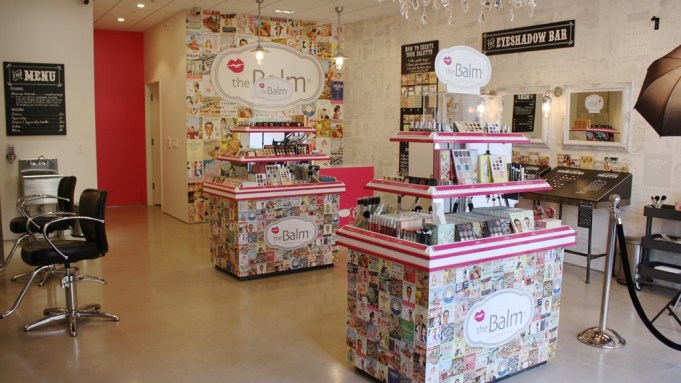 The real estate and restaurant scene in San Francisco’s Mission District — The Mission, to natives — has a decidedly different feel today than it did several years ago with upscale renters and sought-after restaurateurs descending on the neighborhood, but retail in the area has yet to really pop. TheBalm hopes to be at the forefront of The Mission’s retail surge.

On Thursday, the San Francisco-based cosmetics brand officially opened its first store in an intimate 733-square-foot space at 788 Valencia Street on a block known for its food (Tacolicious, The Abbot’s Cellar, Craftsman and Wolves, and Dandelion Chocolates are culinary standouts). TheBalm founder and chief executive officer Marissa Shipman realizes she’s taking a risk by locating there and that appeals to an entrepreneur repeatedly accused of being crazy for establishing the brand in 2004.

Initially, Shipman considered Fillmore Street, probably the safer choice. “Everyone is on Fillmore Street. It seems hopping and all of the other stores are there,” she said. “Then, I had this epiphany. Why are we following all these other stores to Fillmore Street? That’s not who we are as a brand. I started thinking about what is the next big thing. That’s when I started looking at The Mission. We thought it made sense to be a little edgier and off the beaten path. Something in my gut told me The Mission is the right call.”

The available retail unit on Valencia Street also went a long way toward convincing Shipman that The Mission was the right call. Newly constructed, it has cement floors and exposed pipes. On the face of it, the shop’s contemporary, pared-down aesthetic didn’t fit with TheBalm’s flirty, girly, throwback designs epitomized by collage art behind the cash wrap, but that contrast suited Shipman.

“We really like to juxtapose things. The brand juxtaposes the idea of the Twenties, Thirties and Forties with women’s empowerment,” she said. “I love juxtaposing the stark space with this vintage vibe and all this color. It’s industrial meets the Thirties and Forties era of awesome vintage art.”

In developing the store, TheBalm had four unique priorities. One was to introduce facial waxing services priced from $8 for chin and upper lip waxing to $23 for a brow and upper lip combo service. Another was to give customers the opportunity to scour the brand’s entire assortment with 186 stockkeeping units across color, nail, hair care and skin care. “You can play with the products and no one is going to bother you,” said Shipman.

A third priority was integrating customization into the store, which is accomplished with eye-shadow bars. Shipman detailed that there are three eye-shadow bars each containing 44 eye-shadow shades. At the bars, customers can choose from 10 shadow palettes that fit nine or 16 shadows, and can fill them up with the shadows they like best.

The final priority was to enable TheBalm’s customers to replicate makeup looks they get in the store at home. Personal makeovers can be recorded on iPads in the store and watched later. Shipman explained, “If you want to learn to do your smoky eye, the next day you can log on to thebalm.com and you can re-create the look you just purchased. To my knowledge, no one has done that before.”

Although Shipman emphasizes she is “really happy” with TheBalm’s financial performance, she doesn’t talk numbers. She said the privately held brand has no investors and is not seeking them out currently. If she did have outside investors evaluate her decision to put a store in The Mission, she suggested many would advise her to do otherwise because the short-term gains might not justify the move. However, she’s taking the long-term view.

“This is a different play. There is no one else doing this there,” she said. “There is a shift going on and you can feel it. It is going to take a little time. We will see how it goes. We are not one of those companies that hires a firm to map out where we are going to do the best and then we go there. If I did all that, I never would have started this.”