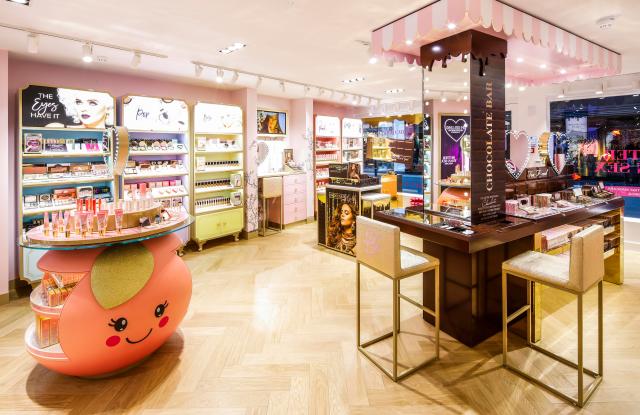 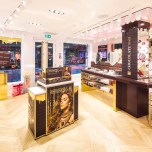 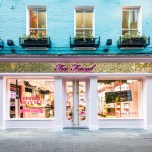 LONDON — Too Faced has crossed the pond and opened its first bricks-and-mortar store here.

The California-based brand was launched in 1998 by former Estée Lauder employees Jerrod Blandino and Jeremy Johnson and is known for its fun lineup of cosmetics. While Blandino could have set up shop closer to home, he said he wanted it to be special and wanted it to be a destination that people would go to. He said London is one of his biggest inspirations for him creatively and that he was being strategic about “growing slow and sure” and wanted to wait for the right time and for the right place.

“I love London,” said Blandino. “When the opportunity came up for Carnaby Street — an iconic fashion, style mecca — I just jumped at it. It’s so completely Too Faced to be there. It’s fun, there’s energy, there’s color and there’s history. It just clicked and I felt right in my heart and soul about it. There’s an energy and spirit to Carnaby Street that I felt. You feel like you want to go shopping, be fabulous and find a treasure. It’s iconic, and even as an American, you can feel the special spirit.”

The American label chose to set up its first shop at 46 Carnaby Street. The 585-square-foot store houses the brand’s entire lineup. There is also a section devoted to Blandino’s favorite products such as Aerin Rose Oil, a Le Labo Candle and Rodin Luxury Face Oil.

The brand has also launched its Peaches & Cream collection at the Carnaby Street store. The collection includes a bronzer, matte lipsticks, highlighters, blushes, foundation, loose powder, primer, finishing powder and eye shadow palette. The range is exclusive to the store along with the brand’s Clover Palette. Prices range from 14 pounds for a Mascara Melt Off to 49 pounds for a Pro Essential Teddy Bear Hair Brush Set.

Blandino, who designed the interiors himself, said that he was in the decorating mindset as he just finished building his dream home in California. “From the fixtures to the experiences, I got to create what I had always envisioned Too Faced to be,” said Blandino. “I wanted it to be a bit like a Too Faced amusement park. So that you go in and you feel those moments. And as you walk around the store, you get experiences per product, per inspiration.”

Experiential treatments were key for Blandino and he called it an opportunity to wrap your arms around your clients and your friends. “it’s incredibly important to have them feel everything,” said Blandino. “Every element from the knobs to the colors of the paint, to the textures of the walls, to the products and how they were displayed.”

Walls were painted a soft pink and set against light wood flooring. There are white spotlight lighting fixtures on the ceiling as well as a glittery Union Jack wall done up in gold and pink shades. Makeup ranges were either displayed on bright colorful shelving or on decorated areas such as the chocolate bar which features a pink and white awning, heart-shaped mirrors and makeup showcased on a dark wood station.

The brand could not disclose sales projections but noted that key markets include the U.S., U.K. and France, followed by Australia, with bestsellers including its Better Than Sex mascara, Peaches and Cream range, the brand’s Hangover collection and Glow Job mask. The mask was his first foray into skincare and he said the item sold out within the hour.

Blandino described the Too Faced client as young women and men who are designing their lives. “They are searching for love, building their career and are socially connected,” said Blandino . “They celebrate life, they have fun with makeup and they love getting dressed.”

The brand plans to create different lines for different retailers, focusing on running the flagship and delving into skincare. “I’ve been working hard on that,” said Blandino. “The mask took me about two years to create, finding soy glitter and using a gold pigment to get it glittery enough… It’s exciting to think that’s another avenue.”

In terms of opening other stores in the future, Blandino said they are focusing on London for now but have been discussing other places and hinted the U.S. would be next.