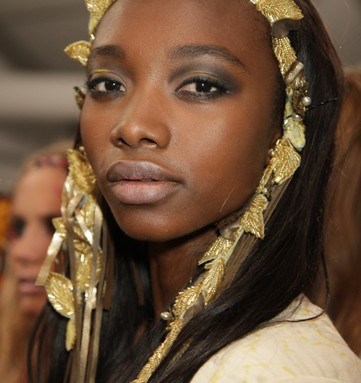 METALLICS were in full force for spring, and not just the usual gold, bronze and silver hues. Shimmering shades of pink and blue popped up on eyes, cheeks and lips throughout the week, with pearly white accents highlighting skin’s dewy texture. “It’s all about a wash of color,” said makeup artist Charlotte Tilbury, as she created “dreamy garden nymph” makeup looks at Jill Stuart’s show Monday. “I’m seeing pastels and metallics as the makeup trends of the season,” said Tilbury, who noted that she plans to do a lilac metallic lip at Zac Posen and silver shimmer at Behnaz Sarafpour. There’s an added bonus to metallic lips: “Shine and shimmer make lips look bigger because they catch the light so effectively,” she said.

SIMPLICITY took center stage for hair at many designer shows, such as the single braid at Marc Jacobs; the clean, flat look at DKNY, and the center parts accented by soft waves at Catherine Holstein, where Bumble and bumble hairstylist Michelle Fiona wanted models to look as if “they had just gotten off a bicycle.” To complement the designer’s feminine, delicate and organic fashions, Fiona used lots of Surf Spray to get a gritty texture, followed by heat, a styling iron and a scalp massage to “fluff it up.”