NEW YORK — Could Victoria Beckham be the next Tom Ford for The Estée Lauder Cos. Inc.?

Beckham, in town last week to show the resort lineup from her namesake ready-to-wear label, also unveiled the “second season” of Victoria Beckham Estée Lauder, her collaboration with the beauty group’s flagship brand. Just nine months after the release of the original limited-edition capsule collection, Lauder said it’s made a sizable investment in the range, which is about to undergo significant expansion.

During an interview at Beckham’s showroom here, the designer said the upcoming Victoria Beckham Estée Lauder line is growing rapidly, both in terms of product and distribution. The 14-piece capsule (15 if one counts the $1,200 limited-edition light box) that originally bowed last September will double in size to 28 products come fall, with global distribution tripling from nearly 450 to 1,200 doors. Ten hero products from the first collection will remain in the line with the addition of 18 new ones and two kits. Retail prices range from $34 for a Lip Pencil in “Victoria” to $95 for the Morning Aura Illuminating Crème. 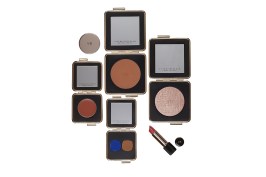 Lauder is mum on the long-term future of its collaboration with Beckham, but judging by the speed at which the company is upping the ante on the partnership, it looks like Beckham is on the fast track to a stand-alone line à la Ford.

Success from the outset gave the company the confidence to up the volume too, according to Stephane de la Faverie, global brand president of Estée Lauder, who said production will triple for the second collection.

De la Faverie and Beckham declined to comment on sales figures, but an industry source said Beckham’s second season — the cadence in which the designer releases makeup is the same way she shows fashion — could do $30 million at retail this fall. Doing the math, that means Beckham’s makeup line could drive over $100 million in sales for the Lauder brand in a year’s time — if the collection were to be sold on a permanent, year-round basis.

“For the moment we’re really…doing seasonal collections. [Beckham’s] passionate about creating these collections…but we’re really at this point [focused on] making this fall a big, big success. That’s what the vision [is] — and for her also. That’s, for now, the answer…and then we’ll have some further discussion…about what’s going to go next,” de la Faverie said.

During a preview of the lineup, Beckham said her personally chosen, city makeup “looks” for L.A., London, New York and Paris will see the addition of Miami, which contains new items such as Cheek Crème in Blond Mink, $60; Eye Matte Duo in Bleu Électrique/Nude, $60; Eye Kajal Duo eyeliner in Saphir/Vanill, $38, and Matte Lipstick in Burnished Rose, $50. A new “Signature” look — not tied to any specific city — will join the group as well. She said the line’s best-selling Morning Aura Illuminating Crème, the anchor for the look, is complimented by three new products: Skin Perfecting Powder, $85; Aura Gloss in Honey, $45, and Eye Ink Mascara in Backseat, $45.

Packaging for the second time around was updated slightly, Beckham added. The black, fluted leather on the original compacts will be pebbled leather going forward, and the Eye Foils, once in black, opaque packaging, are now in clear glass pots with gold caps to make product visible. A new Skin Perfecting Powder, $85, will come in a luxe, blonde-gold textured compact, fashioned from the same hardware as Beckham’s handbags. The Victoria Beckham Lit Beauty Box: Noir, a $1,500 light box with removable lighted mirror and eight products, will be joined by a Victoria Beckham Collection Trousse de Maquillage: Noir Makeup Kit, a $700 leather case with six products.

“The collections really are informed by what I do in fashion…[There is a] strong fashion message. I’d say the makeup goes hand in hand with what I’m doing as a fashion brand,” Beckham said, pointing out that the models in her fall runway show in February wore Gris, a gray eyeshadow from a four-color Eye Palette, $75.

Expanding Victoria Beckham Estée Lauder was a no-brainer for the group. The first collection that launched in September sold out in record time, resulting in a brief encore with 12 products for sale in February. Last month, the range rolled out to Tmall, 25 Sephora doors in Beijing and Shanghai and sephora.com, 13 department stores and seven freestanding Estée Lauder stores and esteelauder.cn. De la Faverie called the initial limited-edition offerings an “absolute success” that has built a “very strong foundation for the second version.”

“The way it’s designed, it sells through extremely quickly…[And we’re] not planning to bring it back. This can happen in a matter of weeks and not… months,” de la Faverie said of the second collection’s launch on Sept. 1., adding that the brand’s two biggest markets, from a volume standpoint, are Beckham’s native U.K. and North America.

He noted that increased distribution is a combination of additional doors in existing retailers to “trying new channels” such as Net-a-porter, sephora.com and select Sephora stores in the U.S., Europe, Middle East, Africa and the Asia-Pacific region.

“Victoria Beckham knows the power of speaking directly to women. She amplifies the voice of Estée Lauder, our founder, with her own voice — in an authentic and passionate way,” de la Faverie said. “[It’s also] the social media power she has — and you saw that with the first collection…The power is really enormous, from in-store…to social posts. The engagement is extremely high, and she brings forth what the brand is already doing with her own voice.”

The effort with Beckham to attract a younger customer to the Estée Lauder brand comes as it shutters its initiative to attract Millennials via the Estée Edit, which had Kendall Jenner as the face. Whether it was formulations, branding, Jenner’s involvement (or lack thereof, evident from her Instagram account, which hardly makes mention of the collection), or a combination of the three, it looks like Beckham’s partnership might be the connection to Millennials that Lauder is desperately trying to forge.