The outré celebrity chats with WWD on songwriting, social justice, sex education and her second soul.

By Julie Naughton and Pete Born on February 18, 2011
View Slideshow 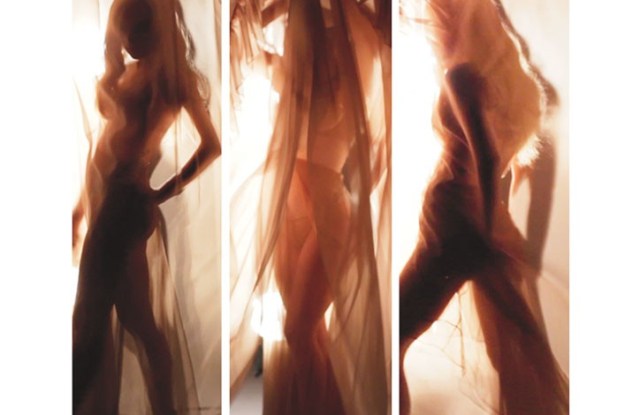 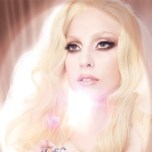 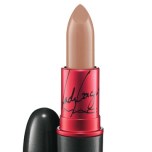 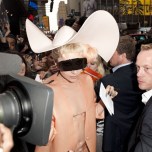 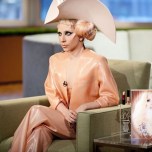 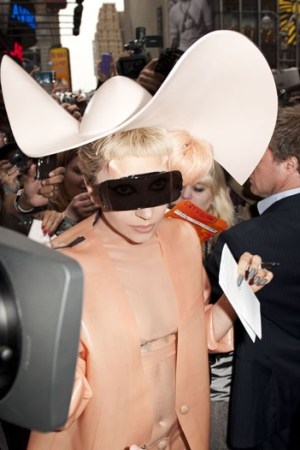 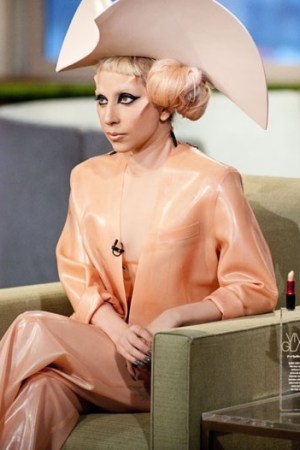 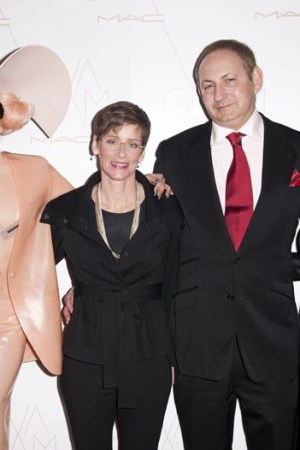 NEW YORK — Contrary to popular belief, what drives Lady Gaga to succeed isn’t an urge to shock people (although she does enjoy it). It is, she said, a desire to live not simply for herself — a lesson she learned from her late paternal aunt, Joanne Germanotta, who died of lupus at age 19.

“I really believe I have two hearts,” said Gaga, whose given name is Stefani Joanne Angelina Germanotta. “I think I actually carry two souls in my body, and that I’m living out the rest of her life and her goodness — she died a virgin, she died never having experienced all these things that we all get to love and experience in our lives. I think that I work in her image. I work in this life as part pop singer and part humanitarian, and to do great things for people because she was a good person and I don’t think she had enough time to do enough good.”

Her aunt’s deftness with poetry and art, in fact, inspired Gaga to go after her dream of being a singer at age 19, especially since Gaga has been diagnosed with a borderline autoimmune disorder. Like her late aunt, Gaga is an artist, and she uses herself as an art project in what she wears — often using her attire to make a statement on a cause about which she’s passionate (such as the infamous meat dress, which she intended to be a statement on human rights). Today is no different, as the entertainer is conducting an interview with WWD at the Trump SoHo Hotel in a latex suit with a swooping hat — which is intended to represent a condom. (Albeit one designed by Thierry Mugler and styled by Nicola Formichetti.) She sees it as the perfect statement on a day when she is acting as the spokesperson for the MAC AIDS Fund.

Further examples of Gaga-as-activist: She used her Twitter account to transmit her joy of the fall 2010 repeal of “Don’t Ask, Don’t Tell.” She stopped tweeting in December, proclaiming herself “dead” until fans brought her back to life by making donations to Keep a Child Alive, a charity which works with children who have HIV/AIDS. She has proclaimed her passionate belief that no matter what one’s sexual orientation, all are deserving of love and respect with her new number-one single, “Born This Way.”

She doesn’t necessarily think that fame comes with an automatic mantle of responsibility to promote social justice, although she feels it is her responsibility.

“I have so many young fans,” she said. “I feel not only connected to them, but I feel responsible for them in many ways. They’re very smart, my fans. They’re very full of life. And it’s an important thing for me to listen to them. And when they say, ‘I feel disenfranchised,’ I speak for them as much as I can. When they say, ‘I’m confused, I don’t know about certain things,’ I research and take part in organizations that I can feel connected to.

“I don’t do this for the money — I want to make a difference,” she continued, when asked what drives her. “I am making a difference with my music, which is why I wrote my new song, ‘Born This Way.’ It’s a song that’s much bigger than me or my understanding of fame. I want to continue to make a difference in every way that I can and continue to make music. Will I do a movie one day? Perhaps. But my focus really is on just continuing to do what I’m great at, which is music, art, performance art and my connection to young people. That’s the thing that I didn’t know I was so good at [connecting to young people] came to me over the last four years, and that’s the Little Monsters [her fans.]”

For a 24-year-old who graduated from a posh Upper East Side Catholic girls school, Gaga continues to be remarkably outspoken about sex. “I went to a Catholic school where the doors were sort of shut and the blinds were pulled down when the nurse came in to talk to us about safe sex and celibacy — it was more of an abstinence conversation than it was about safe sex,” said Gaga of her days at Sacred Heart Academy. “It really was my biology teacher who taught us about safe sex. The wooden penises would come out and she would take out a condom and we would all sort of sit there. We barely even had contact with boys until I was 15 years old.”

Speaking of the Catholic Church and sex, Gaga said she was “excited” about Pope Benedict’s edict in November that the use of condoms can, in some cases, be morally justified — including to prevent the spread of AIDS — although she points out that it isn’t just one-night stands that spread the disease. “Men and women are contracting HIV and AIDS from their primary partners,” she said. “It’s not from a one-night stand, it’s not from a mistake or a fling. It’s from a person that you’re in a monogamous relationship with. It’s really terrifying, because the reality of it is, you think you’re monogamous with someone, and perhaps your husband or your wife is not so honest.”

Gaga credits her mother as the source of her comfort on the subject of sex. “My mom was always very open with me,” said Gaga. “My mother was a dancer for 20 years, so she had a lot of gay friends and straight friends and friends of all different races. She’s a really, really cultured woman, my mother. And she just taught me to be very loving and very open, but very, very safe. She said, ‘Don’t judge anyone, but don’t trust everyone.’”

John Demsey, chairman of the MAC AIDS Fund and group president at the Estée Lauder Cos. Inc., noted that Gaga initially approached MAC about appearing in Viva Glam’s campaign, rather than the other way around. “She said she wanted to be a Viva Glam spokesperson because she used to walk by the stores and see the Viva Glam images in our store windows, and remembered seeing Boy George in the window. She said she wanted to be part of a company that has the guts to do that,” he said.

And certainly, Gaga’s commanding presence was a huge draw for the brand, he said. “She has the ability to stop the room and make everybody listen — and engage them in any conversation she chooses,” said Demsey, who noted that a comprehensive MAC digital and social marketing campaign featuring Gaga is currently being produced. “It will allow people to engage with her and fund-raise.”

The Gaga 2 taupe lipstick and pink-beige Gaga 2 Lipglass, each $14.50, will also raise funds for the MAC AIDS Fund. The colors Gaga and last year’s co-spokesperson, Cyndi Lauper, created generated sales of $34 million (past campaigns were more in the $17 million to $22 million range, Demsey said.) This year, Gaga’s goal is to add $50 million to the more than $202 million the fund has raised to date.

“What I like about MAC is that it’s not so squeaky-clean,” said Gaga. “MAC has a strong identity, a strong camp of people who are the faces of MAC. It’s not just beautiful girls that are airbrushed and stretched to look teeny tiny and perfect. It is so without prejudice and without judgment in the most beautiful way. And that’s how the conversation about sex should happen. It’s removed of race, it’s removed of sexual orientation. Wrap it up, protect yourself, and buy that lipstick for your mom, or your sister, or who knows, maybe your brother likes to wear lipstick — and tell them to be safe. Love yourself.”

The message remains largely the same in this year’s Viva Glam campaign, shot by Nick Knight and featuring an angelic-looking Gaga in a halo of light. “Unfortunately, the issue is still as relevant and as prevalent as ever,” said Gaga. “This campaign is so very important to me because it uses something as accessible and as tangible and as easy to understand as a lipstick and it magnifies it and synthesizes it to young people in a way that is so beautiful — because we can talk about something that is difficult to talk about.

“Safe sex is something that everyone always says, but when you bring up HIV or AIDS, suddenly everyone gets a little quiet,” said Gaga. “This shame and this stigma of going to get tested is something that prevents people from going. The messaging this year — what I came here to address in my latex condom pantsuit — to talk about safe sex, that AIDS is 100-percent preventable but it is zero-percent curable, so protect yourself and educate yourself. ”

Already a superstar better known than many celebrities three times her age, Gaga doesn’t concern herself over-much with specific goals when it comes to her career. She admits to being a student of fame and to analyzing everything she does. But in the end, she’s most concerned with staying true to herself. “I don’t really work towards an ultimate goal — I enjoy the process,” she said. “My favorite book is ‘Letters to a Young Poet’ by Rainer Maria Rilke — that’s actually the tattoo I have on my arm. And Rilke talks about the process of creating and how artists who are obsessed with the goal, who are obsessed with the criticism of them, are not real artists. You have to look inside yourself. There is a light inside of me that is coming out. The light that’s inside of you will come out as well — you just have to beckon to it.”