L’Oréal’s Luxe division will launch Yves Saint Laurent’s Beauté cosmetics line to the country in May.

By Lara Farrar
with contributions from Joyce Man
on April 11, 2013
View Slideshow 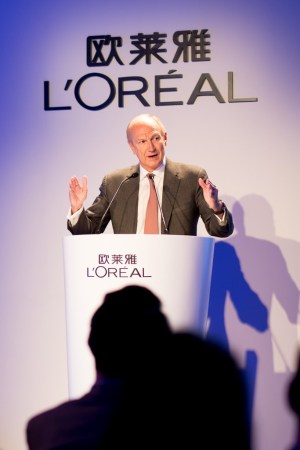 SHANGHAI — L’Oréal’s Luxe division will launch Yves Saint Laurent’s Beauté cosmetics line to China in May in its latest push to cater to the fast-growing beauty market.

YSL will become the luxury beauty company’s 11th brand to enter the market. The first counter will open in an Isetan department store in Shanghai on Nanjing Road.

“Let’s fight against boredom” in the Chinese market, Nicolas Hieronimus, L’Oréal Luxe president said. “We want to keep innovating and surprising the Chinese consumer. Yves Saint Laurent is a beautiful brand that belongs to French haute couture. Chinese consumers, they want the best.”

“We believe China will become a three-category market in years to come,” Hieronimus said. Skin care remains the top-selling beauty category in China.

The Chinese are expected to become the number-one consumers worldwide of brands owned by L’Oréal’s Luxe division by 2015, executives of the French beauty giant said during a press conference here on Wednesday.

“In this country, the sky has no limit because the Chinese have such an appetite for luxury that we can only be excited for the future,” Hieronimus said. “This is just the beginning.”

L’Oréal Luxe organized a multiday event for journalists this week that began in Hong Kong and wrapped up in Shanghai in an effort to showcase how it has built its business in the region as well as outline how it will continue to expand that business in years to come.

A major emphasis was placed on third-tier cities where executives said expansion will continue at near breakneck speed to capture increasingly affluent Chinese consumers who want to buy aspirational beauty products from brands like Lancôme, Kiehl’s and Yue-Sai, a Chinese cosmetic brand L’Oréal Luxe acquired in 2004. One stop on the trip included Lancôme and Yue-Sai cosmetic counters in a department store located in Zhenjiang, a third-tier city with a population of 3.1 million located about two hours outside of Shanghai by train.

“In third-tier cities, women might not be dressed that sophisticated yet, but they are rich,” said Laurence Ma, head of Lancôme’s China business. “They can afford to buy products that are not very cheap.”

In 1997, L’Oréal Luxe opened a Lancôme counter in Hangzhou, a second-tier city, which was the first point of sale for the brand outside of major cities like Shanghai and Beijing. Today, that location is one of the top five performing counters in the world for the beauty brand, according to the company.

Executives declined to provide an exact number for future openings yet said they will continue to penetrate deeper into the market and are looking at openings in fourth-tier cities as well as domestic airports, and even train stations. L’Oréal Luxe brands are sold in 972 department stores, 140 Sephora stores and 68 airport retail spaces across China.

“From the very beginning, we believed in tier-two and tier-three cities, and we still believe this is the future of China,” Agon said. “We believe that China will probably be our number-one market in the world one day and that is why we are investing so much in this country.”

Agon brushed aside suggestions of a slowdown in luxury consumption in the country.

“I am not really concerned about the slowing down of China,” he said. “It is a very limited slowing down.”

Over 40 percent of L’Oréal Luxe’s 5.57 billion euro ($7.23 billion) consolidated net sales in 2012 were in new markets. Seventy-five percent of those “new market” sales were in Asia-Pacific with nearly a third of that sum coming from Mainland China.

Executives said L’Oréal Luxe is the number-one luxury beauty group in China in terms of retail sales. They declined to provide sales forecasts.

L’Oréal China sales, which include the Luxe division and other segments of the French company’s beauty business, grew 12.4 percent last year to reach 1.47 billion euros, or $1.9 billion. That is the China division’s 12th consecutive year of double-digit growth.

While skin care remains the top product category, executives said they are seeing growing demand for makeup and fragrances, especially among consumers under 30. “That generation is changing so fast that we can bet makeup and fragrance are going to be big categories, maybe as big as skin care,” Hieronimus said. “It is a great prospect for the future.”

Executives touted the success of Lancôme, which first opened in China in 1993. They said Lancôme is a leader in skin-care products, such as whitening and antiaging serums. Rose Beauty, an online forum sponsored by Lancôme, has a community of 1.7 million Chinese women who visit the site for beauty tips and product information.

L’Oréal Luxe has been aggressive in broadening its offerings to Chinese consumers by introducing a new brand to the country almost every other year for the past two decades. In January, it started selling Clarisonic, an electronic facial cleansing brush, via an exclusive distribution deal with Sephora. In 2009, Kiehl’s opened in China. The brand now has 51 stores in 22 cities.

“We are acting on all categories of beauty,” Hieronimus said. “The brands talk to all generations from the post-Sixties to the post-Nineties generations. We have brands at every price that can recruit luxury to brands that provide the highest level of luxury.”

While department stores will remain the most important sales channel for beauty products, executives said e-commerce is playing a bigger role as are new retailers, like Sephora, and new retail concepts, such as multibrand stores.

China has also served as a place for experimentation with new products and marketing strategies for L’Oréal Luxe products. After Helena Rubinstein was launched in 2000 in China, executives said there was a realization that Chinese women were seeking high-priced luxury skin care so the brand was transformed into premium offering on the market.

“We had the guts to modify and change the brand into the premium skin-care brand it is becoming today,” Hieronimus said. “It was reinvented in this country and is being rolled out to the rest of Asia and in some European countries.”

L’Oréal Luxe launched the first luxury television commercial for Biotherm men’s products in China and has created skin-care products that incorporate traditional Chinese medicine, such as Lancôme’s Energie de Vie range, which uses ingredients like wild yam and rhodiola. “Many products were created after understanding the needs of the Chinese consumer,” Hieronimus said.

L’Oréal Luxe operates a R&D center in Shanghai with 260 employees. There are plans to open an even bigger center by 2014.

L’Oréal Luxe is not only benefiting from sales to Chinese consumers at home but also to Chinese traveling overseas, who can take advantage of buying cheaper luxury products due to a strengthening Chinese yuan and lower taxes than those placed on luxury goods sold on the mainland. Yet executives said that overseas spend on luxury cosmetics is a “minor phenomenon compared to the extraordinary growth in the Chinese market.”

“The buying abroad phenomenon is not impacting growth [in China],” Hieronimus said.

She said sales to mainland customers had experienced double-digit growth last year, but declined to say what proportion of total travel-retail revenues the nationality made up.

According to a survey tracking the nationality of passengers at departure in 2012 by Paxsmart, a travel-retail industry research company, 23 million were Chinese, making it fourth in traffic number behind the British, Americans and Germans.

To meet Chinese travelers’ needs, Lavernos said the company has adapted outlets in airports through which many of them travel, in Hong Kong, Seoul, Singapore, Paris, San Francisco, Los Angeles and the Maldives.

Points of sale in these locations provide visual material about its products in Chinese. Beauty assistants offer advice in Putonghua. Stores and kiosks in these airports carry promotions targeting Chinese travelers during Chinese New Year in the spring and the Golden Week, the seven-day holiday around China’s National Day, in the fall. They also stock more of the items popular with Mainland Chinese shoppers like Lancôme’s Génifique youth-activating concentrate, Shu Uemura’s cleansing oil, Kiehl’s Ultra Facial cream, and whitening products.

Mainland Chinese tourists on tour groups, who have tighter time constraints, often arrive with a list of products they want to buy, she said.

Besides clientele from the biggest cities of Beijing and Shanghai, there are now increasing numbers of Chinese tourists from what are known as the country’s tier two and three cities, she said.

Hong Kong stores are seeing a similar trend. Stephen Mosely, managing director of L’Oréal Hong Kong, said visitors from the tier two and three cities were on the rise at the group’s boutiques and kiosks in the territory.

As for local shoppers, because Hong Kong has an aging population, L’Oréal is selling more antiaging products, Mosely said.