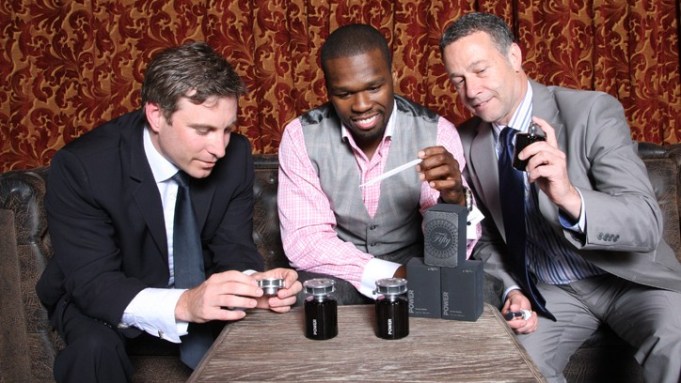 The hip-hop generation has invented a new role for pop stars entering the fragrance business — owner.

This week, Curtis Jackson, known better as 50 Cent, represents the fourth-such deal in two months to spurn the customary licensing route in favor of a rapidly emerging new business model. In return for his direct involvement, Jackson will have significant equity.

His new men’s fragrance, not surprisingly called Power, will be produced and marketed by Lighthouse Beauty, a new company in which the star is a partner. Chris Lighty, chief executive officer of Brand Asset Group and founder of Violator Management, is another partner, as are Howard Sherman of Mod Beauty; Glenn Nussdorf, a major shareholder of Parlux, Perfumania and Quality King Distributors, and Philip Zellner of Product King Marketing, World Source Marketing Group, 111 Design and Edge Display. Power, the first fruit of this unusual partnership, will be released in November at Macy’s (see related story, this page).

Jackson, who confirmed the news first to appear in WWD on June 8, sat down for an exclusive interview Tuesday afternoon at Manhattan club Avenue. “It is a lot more difficult than just allowing someone to put you in front of their product,” he said of the new business model he and his partners have created — a structure that is perhaps the most far-reaching and ambitious of all of the similar deals. “But I think it’s the best possible way for me. Once I package myself and sell it to the public, it’s pretty tough for you to find someone who can be better at being me than I am.”

He added, “I find it so difficult to create a business where they don’t completely utilize me,” he said, mentioning his now-defunct apparel line with Marc Ecko. “I mean, as more than a marketing tool. It will be a success based on that, but if we use the traditional business format and add me to it, we can do great.”

Lighty, who spent years matching high-profile entertainment clients to major corporations (including Jackson to Vitamin Water), saw an opportunity in establishing a destination for artists and celebrities to create and distribute their brands from start to finish. “What we’ll do at Lighthouse Beauty is not only transform a name into a product, but also take that product from its inception to the shelves,” said Lighty. “We are bringing the different marketing attributes to the table along with the celebrity pop culture aspect, and using all of those tools to really make this collaboration work. It will work not only for 50 Cent, but also for other fragrance deals that come after it.”

Jackson’s deal includes partners from nearly every area of the fragrance industry — marketers, perfumers and distributors and packaging experts. “I had help,” he said of the development process. “I learned early on not to feel like you have to make the final decision on everything and to take constructive criticism from people who know what they’re talking about.” He noted he also has broadened his reach in other areas, founding Cheetah Vision Films, a production company; acting in six upcoming movies and creating several video games. Jackson also has penned several books, including the New York Times bestseller “Pieces of Weight,” his autobiography. His newest work, “The 50th Law” — which Jackson coauthored with Robert Greene — is due in stores Sept. 8.

Jackson is in good company in his way of thinking. In May, Grammy-nominated R&B singer and songwriter Akon announced he would enter the fragrance category this fall in partnership with Konvict Cosmetics Intl., in which he holds a stake. In April, Parlux announced it was partnering with Iconic Fragrances LLC, a firm in which Shawn “Jay-Z” Carter is a principal and of which Rihanna and Kanye West are licensees, to develop scents for Carter, West and Rihanna — as well as an unnamed “well-established female star” who is widely speculated to be Carter’s wife, Beyoncé Knowles. Instead of receiving cash from licensing royalties, the stars will get royalties and profit sharing in their own fragrance brands. Most of the payoff will be through warrants to buy Parlux stock. The first scents will hit the market during the summer of 2010.

All of these deals can be traced back to May 2005, when the beauty industry got a huge hit of music and Hollywood star power, courtesy of music and branding impresario Steve Stoute. Stoute assembled a star-studded cast of investors — including Carter, Will Smith, Jada Pinkett Smith, Thalia, Tommy Mottola, James Lassiter, Jimmy Iovine and Andrew Farkas — to catapult the growth of Carol’s Daughter, an urban beauty brand founded by entrepreneur Lisa Price in her Brooklyn kitchen in 1993. When the group first got involved, Carol’s Daughter did an estimated $5 million in retail sales yearly. Under Stoute’s stewardship, the brand is said to have grown to more than $35 million in retail sales yearly.

Perhaps the most key part of this deal structure is in utilizing the celebrity’s entertainment muscle as a marketing tool. At the time of the initial Carol’s Daughter deal, Stoute noted the company would use “more of the tactical stuff you use to launch movies and albums” to raise the brand’s profile. This fall, Carol’s Daughter will test that philosophy with My Life by Mary J. Blige, a new scent.

There are a number of advantages to structuring deals this way, said Lighty. “We’ll see more control, and we’ll be able to not have to burden the company with unnecessary costs that go along with some of the bigger firms because we will be able to move more nimble with the financial environment,” said Lighty. “We deal with pop culture on a daily basis, and we understand what the new consumer is looking for. We feel this new consumer has grown up on hip-hop — that’s why Sean [“Diddy”] Combs’ fragrance is so popular, because it was the first time that a fragrance was targeted to this generation. Usher has also been successful. And 50 is one of the few icons — along with Puffy and Jay-Z — that really speak to this generation.”

And Lighty and his partners will be focusing heavily on Internet promotion, both for Power and for future projects. “My kids watch their content on a screen about this big [making a square with his fingers], and if we are not supplying them with fresh content every day, they lose interest,” said Lighty of his four children, who range from 9 to 19. “When you look at all of the fragrance advertisements right now — everyone can have their shirt off, and everyone can have pretty girls in the ad. We were adamant that we were going to be different.”

A dedicated fragrance site is planned, but it will play off Jackson’s official site, 50cent.com. “That is where the kids are going to get their information first and foremost,” said Lighty. “The fragrance site will be active, but it won’t be as active as you normally see. They’ll still get most of the information on the fragrance from 50cent.com — we’re the same place that they would look to for their music and their tour schedules and everything. We give it to them as an easy link on 50cent.com and the sites that they are used to finding information on 50 — so it is more of when they get to the [dedicated] site, it is more about purchasing and leading [consumers] to our retail partners like Macy’s.” Lighty noted that e-commerce is also in the plans.