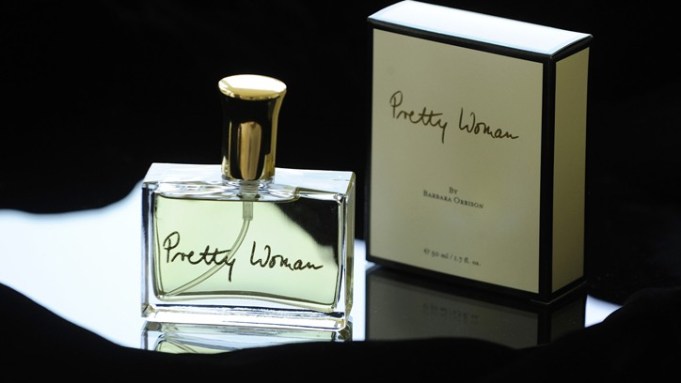 LOS ANGELES — “Pretty Woman” — first a huge hit song and then a huge hit movie — is now a perfume.

Barbara Orbison, widow of legendary singer Roy Orbison, has just launched a scent inspired by her late husband’s most famous song, and is driving forward plans to launch a capsule beauty line.

Pretty Woman Perfume, with notes of bergamot, stargazer lily, amber and patchouli, was created by Orbison after a decadeslong fascination with fragrances. The German-born businesswoman and music publisher said as a child she used to mix scents from bottles lying around her family home, and eventually began experimenting with perfume oils.

“When I discovered essential oils as a teenager during a visit to the South of France, my life changed,” she said. At 18, she married Roy, with whom she has two sons.

The new fragrance, which has just started shipping to stores such as Stanley Korshak in Dallas and Planet Blue in Malibu, Calif., is housed in a simple square-shaped bottle within a beige box bordered in black. Orbison, who has homes in Malibu, Nashville, New York, London and Sweden, said she wanted to keep the packaging as unfettered as possible, the name of the fragrance lettered across the front in handwritten type. The 1.7-oz. bottle retails for $80.

Although Orbison says response from retailers has been enthusiastic — she is also in negotiations with distributors in Sweden, England, India, Australia, Latin America and Germany — she believes it has more to do with the quality and nature of the fragrance rather than any lingering nostalgia for her husband, who died of a heart attack more than 20 years ago.

“Today, a store has to be very careful what they buy and what they keep on the shelf,” she said. “I think the name is catchy and makes sense for a fragrance. But the scent has to go along with it. Today, nobody can indulge a whim to buy bottles and have them just sitting on the shelf.”

Orbison is now putting the finishing touches on her follow-up products, which will include Pretty Woman Pure Perfume, a highly concentrated perfume oil housed in a gold mesh bag. There is also a trio of scented candles, in black, white and gold, encased in heavy glass. The new products will be available for holiday. She also is looking to roll out body lotion and shampoo. Industry sources estimate that first-year sales of the line could be worth $1.5 million in U.S. and international markets.

“Everything I add to the line has to have something special about it,” she says. “The name Pretty Woman is important to me, not just because of the song or the movie, but because I feel every woman is pretty, every woman is beautiful, and it doesn’t make a difference where they live or how old they are.”