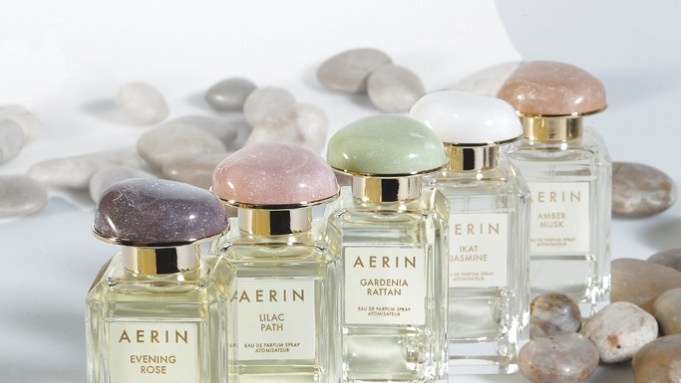 Since its founding in April 2011, Aerin Lauder’s lifestyle brand has quickly ramped up to include cosmetics, home items, jewelry and purses. So it should come as no surprise that she’s planning to take her brand into fragrance and that she’s doing it in a big way — with a quintet of scents.

“One of my earliest memories is fragrance,” said Lauder, founder and creative director of the brand which bears her name, in an interview in her midtown design atelier. “When I think about certain people and moments in my life, fragrance is always involved — whether it’s going for a bike ride and smelling honeysuckle for the first time or gardenias in my hair when I got married. They all evoke memories and stories and moods.”

Doing an entire wardrobe was key, said Lauder, because she wanted to provide a scent for each mood and time of year.

Lauder’s attention to detail is evident throughout this project, even down to the fragrance cartons, which feature patterns used in Lauder’s fabric licensee with Lee Jofa. As well, each glass bottle is topped by a differently colored stone that incorporates the color of one of the ingredients in the juice — green for Gardenia Rattan, pale brown for Amber Musk, pink for Lilac Path, white for Ikat Jasmine and purple for Evening Rose. “It has an element of fragrance and lifestyle brought together,” said Lauder.

Lauder and Karyn Khoury, senior vice president of corporate fragrance development worldwide at the Estée Lauder Cos. Inc., worked with Firmenich to concoct the scents.

Gardenia Rattan is intended to capture the spirit of summer and has sparkling wet marine notes combined with gardenia, tuberose and Tahitian tiare and amber. Its carton is reminiscent of a summer garden and features the Aerin for Lee Jofa design “Sayre,” a modern floral.

Amber Musk is inspired by winter, said Lauder. It blends ambrox, coconut water, rose centifolia absolute, benzoin and musk. The carton features the Aerin for Lee Jofa design, “Kenlyn,” a personal take on the floral prints that were always part of her grandmother’s home decor. The print is an adaptation of a French document in the Lee Jofa archive that features two birds among exotic flowers and foliage.

Evening Rose is meant to be a day-to-night fragrance. Juicy blackberry and rich cognac are blended with voluptuous rose centifolia and Bulgarian rose absolute and incense. The outer box is of the Aerin for Lee Jofa “Hither” pattern, which was adapted from an English Jacobean hand-blocked linen from the Lee Jofa archive, dating back to the early 20th century.

Each of the scents will retail for $110 for a 50-ml. bottle. In the U.S., they will be carried in about 100 specialty stores, including Neiman Marcus, Bergdorf Goodman and Saks Fifth Avenue. They will also be available at Holt Renfrew in Canada and Selfridges, Brown Thomas and John Lewis in the U.K., as well as on Esteelauder.com and Aerin.com, noted Jane Hudis, global brand president of Estée Lauder, Aerin’s beauty licensee.

While Lauder and Hudis declined comment on projected sales, industry sources estimated that the fragrance collection could do $8 million at retail globally in its first year on counter, with about 70 percent expected to be generated by North America.

Lauder appears in the advertising, which was shot in Palm Beach, Fla., by Claiborne Swanson Frank. In the shot, which will begin running in December fashion, beauty and lifestyle magazines, Lauder is wearing a floral Valentino dress which incorporates each scent’s color. “It’s reminiscent of vintage Estée Lauder ads,” said Lauder.

The Aerin line includes myriad licenses. Candles are being done with Nest; cosmetics are licensed to the Estée Lauder Cos. Inc. The Aerin home object collection, produced in-house, arrived during the holidays. Footwear, produced by Jimlar; fashion jewelry, done by Erickson Beamon, and sunglasses, by Oliver Peoples, were launched this spring. Coming in the fall are furniture from E.J. Victor, interior lighting from Visual Comfort, fabrics, trimmings and area rugs from Lee Jofa and tabletop and home and decorative accessories from Lenox Corp.