David and Sybil Yurman have added something new to their portfolio of jewels: a women's fragrance set to launch in August. The scent, a floral chypre,... 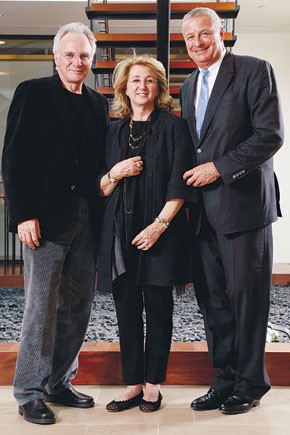 David and Sybil Yurman have added something new to their portfolio of jewels: a women’s fragrance set to launch in August. The scent, a floral chypre, will be sold in less than 300 specialty store doors in the U.S. and could do $15 million at retail in its first year on counter in the U.S. and Canada.

David and Sybil Yurman are aiming to juice up their jewelry business with their first foray into the fragrance market.

The Yurmans, who founded their eponymous company in 1980, said the fragrance business offers an opportunity to extend David Yurman’s design principles to a genre beyond jewelry. They have founded David Yurman Perfumery with Clarins Group, with a first offering, a women’s fragrance, slated for an August launch.

“It’s a way to touch more of the senses,” said David Yurman, chief designer and chairman of David Yurman, of his new business. “A good fragrance is like a wine — it lingers, and it can  take your breath away. We’re moving into unknown ground, but we know what we like to explore.”

And perfume isn’t just something to round out the Yurman business portfolio, emphasizes Sybil Yurman, the watch and jewelry firm’s president and chief marketing officer. “David has always traveled with scented candles — even on trail rides,” she said. He interjected, “A scented candle in a lean-to is quite wonderful.”

Sybil Yurman continued, “Scent has always been important to him. Jewelry and scents are both about design. With jewelry, you create art with the colors of the gemstones. With fragrance, you do it with the notes.”

“This fragrance represents itself very well in the world of David Yurman,” said Christian Courtin-Clarins, chairman and chief executive officer of Groupe Clarins Worldwide. And it does in the Clarins world as well, he said. “We are always looking for a real story; we do not want to sell a ‘me-too’ fragrance. David and Sybil have a vision of modernity that appeals not only to an American audience, but to an international one as well. It is always the creative people that push you to do something different.”

The floral chypre, by Firmenich’s Harry Fremont, opens with vibrant mandarin, fresh green petals and cassis, built around a core of peony, water lily, natural rose otto, patchouli, exotic woods and soft musk. “There is a femininity to it, but it’s a lot like people describe our jewelry to be — masculine and feminine,” said Sybil Yurman. In fact, the fragrance’s structure was inspired by one of Yurman’s jewelry designs, a bouquet of stones, she said. “With that piece, you don’t really see one individual color, you see an essence of color with the mix. This fragrance is similar — it isn’t about a top note, middle note. It’s about a bouquet that you smell at the same time. We didn’t want the fragrance to be defined by any one note.”

On the question of pricy positioning, David Yurman seemed unfazed. He said, “$120? That’s a good tip in a restaurant for four people.”

The bottle, designed with Yurman creative director David Lipman, is made up of a gold-toned, plastic-lined inner piece encased in a customized pressed Italian crystal shell. The sculpted gold cap is intended to evoke Yurman’s iconic Cable Collection of jewelry, while the neck of the bottle is a replica of David Yurman’s wedding band. “We were going for the idea of encapsulating the fragrance in a gemstone,” said Sybil Yurman. “It was very hard to do, but very important to us.”

While the scent’s upscale specialty store distribution is still being finalized, it is likely to mirror that of Yurman’s jewelry collections, which are sold in stores like Neiman Marcus. In total, the scent will be available in fewer than 300 U.S. doors at launch, said Jonathan Zrihen, president and ceo of Clarins Group USA. It will likely go into Canada and the Caribbean later this fall, he added.

“As the David Yurman business grows, so will our fragrance distribution,” said Paul Blum, ceo of David Yurman. “This collaboration is laying a base for future scents.” Yurman’s company has just opened a Hong Kong office and is in the process of finalizing its Asian distribution plan. A lease has been signed with the Four Seasons in Macau, with a July opening planned, and Tokyo is also on the books. By yearend, the Yurman brand is also slated to be sold in Europe and Russia; expansion into the Middle East is planned for 2009.

In keeping with the Yurman brand’s luxury positioning, upscale sampling vehicles are on tap for the launch, said Brad Horowitz, senior vice president of marketing for the Clarins Fragrance Group. They include black cord and silver bracelets infused with the scent, as well as miniature pump sprays and mini jars of the body cream. “We want consumers to discover the luxury of the Yurman brand at counter,” said Horowitz.

While none of the executives would discuss sales projections, industry sources predicted that the scent could do $12 million to $15 million at retail in its first year on counter in the U.S. and Canada. As much as $5 million could be spent on advertising and promotion, industry sources said.

National advertising, shot by Peter Lindbergh, will feature model Amber Valletta, who has also been featured in Yurman jewelry advertising. The campaign will begin running in October fashion, beauty and lifestyle magazines.