Being a worldwide celebrity has dark and light aspects — and with her new scent, Lady Gaga Fame, one of the world’s most famous entertainers is exploring both.

By Julie Naughton and Pete Born on July 13, 2012
View Slideshow 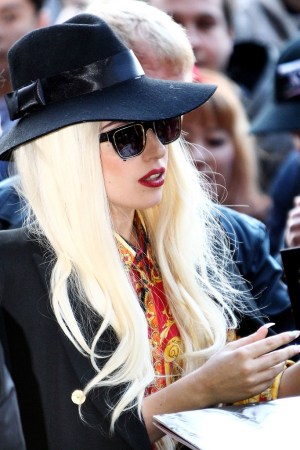 Being a worldwide celebrity has both dark and light aspects to it — and with her new scent, Lady Gaga Fame, one of the world’s most famous entertainers is exploring both.

“Fame is an illusion — if you really want it, anyone can have it,” Gaga told WWD via e-mail of the concept for the fragrance.

And heaven forbid that the scent be ordinary in the least. Lady Gaga Fame, which will be released globally in late August by the artist’s Haus Laboratories and fragrance licensee Coty, is black in the bottle, but the liquid sprays clear and is invisible upon becoming airborne.

“Lady Gaga joins a legendary cast of talent for whom Coty has created scents,” said Bernd Beetz, chief executive officer of Coty Inc. “Gaga’s launch represents my personal credo brought to life….Innovate or die! Absolutely everything about this launch is innovative, from the bottle, to the juice, to the lady herself….She’s zeitgeist in a bottle.”

“She is an artist that is never satisfied with the status quo — she always has this way of challenging everybody and trying to do something more, something different,” said Renato Semerari, president of Coty Beauty. “She has her own ideas and very often they’re very interesting and challenging…really, she’s not the one who says, ‘It’s OK, let’s move on and turn the page.’ She’s always thinking, ‘Can we do more?’ This is a very stimulating partnership; and she’s pushed us with her ideas, we’ve come with our own ideas — and the combination of the two is very valuable.”

“It is the first-ever black eau de parfum and we use language like ‘black like the soul of fame but invisible once airborne,’ which makes the fragrance an allusion to the dark side of fame, the price of fame and the narcissism of fame,” said Steve Mormoris, senior vice president of global marketing for Coty Beauty. “The soul of fame being black was the intellectual foundation of the color of the fragrance.”

Not to mention a difficult task to execute. “It was a technical challenge for our labs, but we worked with the fragrance suppliers and we ended up creating very proprietary new technology,” said Mormoris, declining to go too far into the scientific explanation.

The juice’s structure is also unusual, Mormoris said. “It’s unique because it’s not pyramidal with a top, middle and bottom note,” he said. “It has a trampoline structure — notes are rising at different rates that are quite random. Some accords will come out if you rub it, other accords will come out later. It has random propulsion and doesn’t have a classic linear drydown. We call it push-pull, and it will smell different on different people. There is a different volatility for different notes, and they’re of differing strengths. They work together harmoniously, but then they undergo metamorphosis on the skin, so you’re constantly surprised.”

Lady Gaga’s requests for unconventional scents “showed me how intellectually curious she was and that she had no boundaries,” said Mormoris. “She was challenging us and herself to see what she can do that’s unique.”

Perfumers Richard Herpin, Honorine Blanc and Nathalie Lorson of Firmenich worked with Gaga to create the juice, which has three main accords: dark, sensual and light. The dark accord was inspired by belladonna, the deadly plant, and has incense; the sensual accord includes honey, saffron and apricot nectar. The light accord features crushed tiger orchid and jasmine sambac. Together, the notes read as a fruity floral focused around belladonna, said Mormoris. (Welcome news to her fans — when she announced the deal, Gaga had visions of blood and semen notes.)

“Lady Gaga talks about how her music has a sweet center and a dark shell and a lot of her music has refrains that have a rough passage that go toward a sweet-spot melody in the middle,” said Mormoris. “She referenced that a lot and we tried to capture this type of duality in the fragrance, with the incense and something sweet like apricot.

“Lady Gaga wanted an artistic fragrance,” continued Mormoris. “She’s quite poetic, she references modern art a lot and of course music, and she has a very distinct aesthetic sense, so she’s really looking for a high-quality crafted product that expresses who she is as an artist. There’s nothing commercial about it except it’s intending to be commercial, which is harder to do — but in the end, the rewards are greater.”

The Ultimate Masterpiece is Gaga’s “pure vision” for her scent brand, complete with a heavy, clear glass, egg-shaped bottle and a weighty gold-claw-inspired cap, and a number of doors will be carrying that size exclusively, said Mormoris. The smaller sizes are said to be intended to make the collection financially accessible to all of Gaga’s fans. Gaga worked with Nick Knight to design the bottle. “Lady Gaga conceived this egg idea back at the Grammy Awards where she came out of an egg, so it’s symbolic,” said Mormoris, adding that the gold-toned cap with extended metal pieces is intended to resemble the points of a claw. “The [bottle] design is simple and elegant and has a prestige feel and look, but it has symbols that are disruptive and [so] her. It’s not of the moment and trying to shock you, but a very eternal, timeless classic fragrance message because Gaga saw this as part of her artistic legacy.”

The collection will also include three ancillaries. Black Soap, $15, will be out in August in limited distribution, while a black shower gel, $25 for 200 ml., and a black body lotion, $30 for 200 ml., will be on counter in November.

The ad campaign, which will begin running in September fashion, beauty and lifestyle magazines including Vogue, Harper’s Bazaar and Elle, was shot by Steven Klein and includes double-page spreads and single pages. TV is in the plans, and Klein also worked with Gaga to create a three-minute feature film promoting the scent, which will appear online in the U.S. While executives declined to comment on advertising and promotional spending, industry sources estimated the warchest at about $30 million globally in the scent’s first year. Gaga is also scheduled to make personal appearances in promotion of the scent globally, with retailers and timing still being planned. Gaga will also host a party Sept. 13 at the Guggenheim Museum in New York to introduce the scent to the media. While keeping mum on specifics, Semerari quipped, “There will be theater…she’s not the kind of person who just shows up and says hello.”

Lady Gaga Fame will be carried in about 3,000 department and specialty stores in the U.S. — including Macy’s, Bloomingdale’s, Saks Fifth Avenue and Sephora — and in about 30,000 doors in total globally in 84 markets. In the U.S., the scent will enter what Mormoris calls tier one department stores (such as Macy’s) first, followed six months later by tier two doors such as Ulta and Sephora in J.C. Penney locations. Mormoris emphasized that the scent “will never be a mass-market fragrance.”

While Gaga and executives declined to comment on projected sales, industry sources estimated that the scent would achieve net sales globally of $100 million in its first year on counter, with at least 30 percent expected to come from U.S. sales. While Coty declined comment on Gaga’s compensation, industry sources estimated that Gaga has been guaranteed a minimum of $15 million in royalties in a three- to five-year deal.

When asked whether Gaga’s new fragrance could anniversary the huge numbers ($39 million at retail) racked up last year by Justin Bieber’s women’s fragrance, Muriel Gonzalez replied, “we think so.” The executive vice president and general merchandise manager of cosmetics, fragrances and shoes at Macy’s Inc., continued, “We think that Lady Gaga has got a huge following. She’s been so personally involved, which the Coty people will tell you, in every aspect of the fragrance from its color, to the bottle to the material’s use. It is going to be a huge advantage, because she is so involved with the project that she will be tweeting her fans, her Little Monsters. I think they are going to be very curious about it. The project is very, very well done. All of these celebrity fragrances have been very successful for us in bringing in customers to Macy’s. Some of them are new customers — new to fragrance, new to Macy’s — and we think this will be no exception. We think it will be very big.”