Macy's livestreamed the fragrance's launch at its Herald Square flagship to stores around the country.

By Julie Naughton and Pete Born on October 14, 2011
View Slideshow 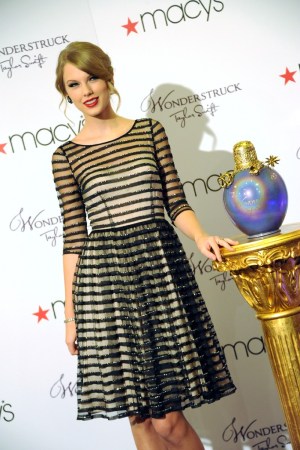 Purple hysteria broke out at 5 p.m. Thursday when Taylor Swift stepped onto a carpet of her favorite color — purple — in front of Macy’s Herald Square. Singing broke out from of phalanx of teenage fans, while one determined young man repeatedly shouted, “Taylor Swift, marry me!”

This story first appeared in the October 14, 2011 issue of WWD. Subscribe Today.

“I’m blown away that there are this many people here,” a Tracy Reese-clad Swift said, surveying a crowd that appeared several-hundred people deep, both outside the store and behind barricades on the store’s main floor. “It’s crazy and it’s wonderful.”

While the real Taylor was only in New York, Macy’s livestreamed the appearance for the Wonderstruck launch to stores in Atlanta; Miami; Philadelphia; Indianapolis; Washington, D.C.; Chicago; Houston; Memphis; San Francisco, and Rancho Cucamonga, Calif., noted Martine Reardon, executive vice president of national marketing for Macy’s. The retailer was positioning the event as a national fragrance launch, perhaps the first of its kind.

Just 300 of the $153 sets were sold, generating sales of nearly $46,000. Each contained, in addition to a guaranteed in-person meeting with Swift, a 3.4-oz. eau de parfum, a 6.8-oz. scented bath gel, a 1-oz. edp travel spray, a tote bag and an autographed Wonderstruck ad. Fans started camping out Tuesday night to secure their places in line, with the line already several-hundred people long by dawn Wednesday.

“A personal appearance is great because it gets a celebrity out there, but it’s limiting,” said Elizabeth Park, evp, North America Marketing for Elizabeth Arden, of traditional store appearances. “This gives us the opportunity to reach out to millions online at macys.com, elizabetharden.com and Taylor’s Facebook page.” Swift has more than 26 million Facebook fans, Park noted.

Swift gives a resounding “no” to the idea of a men’s fragrance and said while she hasn’t decided on a name for her second scent, it will most likely come from the lyrics of one of her songs, as did Wonderstruck — named after a line in her song “Enchanted.”

Does the stylish Swift aspire to do a clothing line? “Not right now, I don’t really feel like doing that right now either. Maybe at some point in life I will, but you can only chase so many rabbits before you lose them all.”