The British lingerie brand will launch its fourth fragrance — Pétale Noir — this Valentine’s Day with a coordinating Luxury Body Elixir. 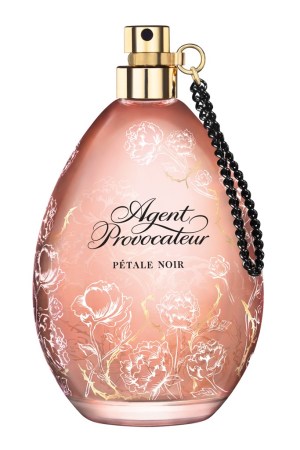 Call it the newest love drug.

British lingerie brand Agent Provocateur will launch its fourth fragrance — Pétale Noir — this Valentine’s Day with a coordinating Luxury Body Elixir. Designed as a departure from the brand’s previous offerings, which were “smoky, woody and spicy,” Pétale Noir is designed to relate a “hidden sultriness,” one that begins much more innocently.

“The original inspiration  [for the scent] was the film ‘O,’ but viewed from the perspective of a modern seductress,” said president of Worth Paris (Agent Provocateur’s U.S. distributor), Tony Bajaj. “[She is] more subtle at first viewing, less overt, still determined to get what she wants….The tension lies between the outward expression of seeming innocence and the darker sentiments just below the surface.”

Seeking to impart this juxtaposition, Pétale Noir ($87 to $118) is meant to seem initially soft with a bold finish. “The top notes of the fragrance represent this innocence (water lily, bergamot, violet leaves, hyacinth and ‘flower stem’) while the deeper, darker base notes of musks, leather, vetiver, oakmoss, tobacco leaf, patchouli, amber, cedarwood, sandalwood and labdanum represent her darker side,” said Bajaj. To highlight the fragrances’ naughty-meets-nice inspiration, the dusty pink, flower-adorned bottle will feature a black chain closure.

Launching alongside Pétale Noir will be the Luxury Body Elixir, $53, designed to offer “aphrodisiac properties” with a cocktail of secret ingredients, namely a thorny, fruit-bearing plant called Devil’s Eyelashes and tephrosia purpurea seeds, a flowering plant used as fish poison, to impart a “tingly feeling” on the skin. “The result is an overall sensation of opulence,” said Bajaj.

To promote its newest offerings, Agent Provocateur plans to introduce in-store visuals a week after their Valentine’s Day launch, and will be advertising for the first time in national magazines. The campaign will feature a lingerie-clad Paz de la Huerta of “Boardwalk Empire” fame. “Paz is the perfect personification of this woman; innocent with one look, deeply provocative with another — Eve in the Garden of Eden tempting her prey,” said Bajaj.

Although the brand declined to break out numbers, industry sources estimate first-year sales will reach $2 million. Both products will be available in 133 doors, including Agent Provocateur, Henri Bendel and Nordstrom, as well as online at agentprovocateurparfums.com.