Alfred Sung is headed back to the altar with Always Alfred Sung, his newest wedding-oriented fragrance. 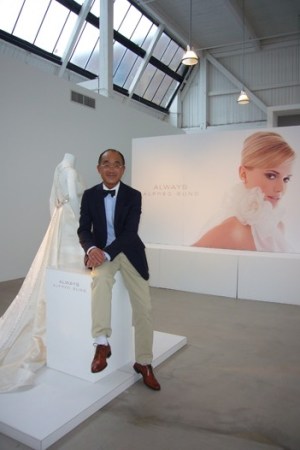 TORONTO — Alfred Sung is headed back to the altar with Always Alfred Sung, his newest wedding-oriented fragrance.

“I was inspired to create this scent after reading a biography of Grace Kelly,” said the Canadian designer during an interview in his airy loft office in the Liberty Village area of the city. “The book put special emphasis on the beauty and elegance of her wedding day. She looked so elegant, and the details of the wedding — the regal ceremony, the classic dress, the profusion of flowers and the timeless love story — were so inspiring to me. It made me want to create a scent for the modern bride.”

Sung, who has overseen his eponymous brand since 1980, entered the bridal apparel category in 1992. His first bridal fragrance, Alfred Sung Forever, was introduced in 1993. The launch is the first one for Sung since Elizabeth Arden acquired the licenses, previously held by Riviera Concepts, in July 2006. Sung’s first fragrance, Sung Alfred Sung, was launched in Canada in 1986 by Riviera Concepts.

“I first saw sketches of Alfred’s in 1979, and I thought there was magic there — and that started our business together,” said Saul Mimran, president and managing director of Mimran Group Inc., the owner and licensor of Sung’s brand worldwide. Mimran, his brother Joseph and Sung also founded Club Monaco.

Sung worked with perfumer Clement Gavarry of International Flavors & Fragrances Inc. to create the sparkling floral. Top notes are of water lily, kumquat and neroli; the heart is of pink peony, honeysuckle petals and orris absolute, and the drydown is of sandalwood, patchouli and ambrette seeds. “This scent is like a colorful bouquet built around orris, the most unique ingredient of my palette,” said Sung. “Other notes — like sandalwood and water lily, which calls to mind my childhood in Hong Kong — evoke memories, and kumquat is a lucky symbol.”

Added Gavarry: “Orris absolute, which we built the scent around, offers a modern element to the structure — and, in fact, is the skeleton of the scent. The absolute is extracted from the roots, making it one of the most expensive ingredients, but it is a very distinctive and modern element.”

The fragrance bottle is a square of glass encased in a white frame, with the Always Alfred Sung logo in silver. The outer carton is white with an embossed floral design and silver accents.

Always Alfred Sung will launch in about 1,100 doors in Canada, including The Bay, Shoppers Drug Mart and Sears in April. That month, it will also become available at Elizabeth Arden’s Manhattan flagship and on elizabetharden.com. A wider U.S. retail rollout is planned this fall, with about 200 specialty store doors in the U.S. getting the scent at that time.

Advertising, which features a model in a white dress holding the bottle, was shot in Toronto and styled by Sung. “Alfred has a real love for the gracefulness of the neck, so all of his dresses have a neck emphasis, which is visible in this ad,” said Mimran. The ad will begin running this fall in fashion, beauty and lifestyle magazines, with exact timing still to be determined.

While none of the executives would discuss sales projections or advertising spending, industry sources estimated that the scent would do about $7 million at retail in North America in its first year on counter, and that about $2.5 million would be spent on advertising and promotion in that time frame.