Sales of Sweet Like Candy are tracking ahead of the pop star's previous fragrance launch Ari. 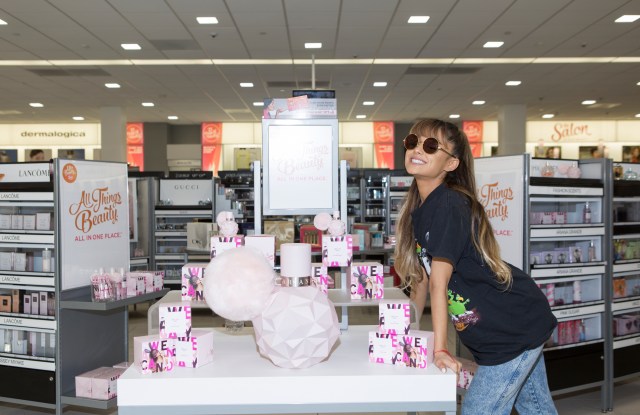 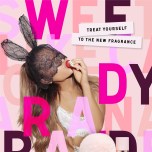 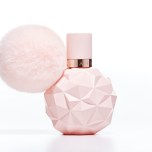 Ariana Grande is topping the fragrance charts again with her sophomore release.

After making a splashy debut on the scent scene with her fragrance Ari selling more units than any other launch last year, the pop star appears to have another hit on her hands with its follow-up, Sweet Like Candy. Unveiled at Ulta Beauty in July, the sugary fragrance, which is priced from $20 for a 0.25-oz. eau de parfum rollerball to $59 for a 3.4-oz. eau de parfum spray, has rolled out in recent weeks to Stage Stores, Lord & Taylor, Bon-Ton, Boscov’s and macys.com in the U.S. along with Shoppers Drug Mart in Canada.

“Ariana was a great success with Ari, and this second brand is outperforming the first, which is unheard of. Particularly with celebrities, usually the second fragrance is considerably smaller,” said Noreen Dodge, chief marketing officer of Luxe Brands, Grande’s fragrance license partner, indicating Sweet Like Candy could this year surpass the $30 million to $40 million in sales industry sources estimated Ari generated in four months at the end of 2015. “It all starts with Ariana Grande as an artist. She continues to grow globally, and she supports her brand authentically on social media so the fans know it’s really her behind the brand.”

Grande’s global reach is critical to her sales accomplishments in a celebrity fragrance field that has lacked many of them. “When we were first coming out with the brand, there was an unknown of how successful this brand could be because the category had been pretty soft. We have done phenomenal in the U.K. and, with Douglas in Germany, she has exceeded expectations and continues to be exclusive. Japan, not typically a fragrance market, is strong for Ariana,” said Dodge, adding Grande’s fragrances are concocted to appeal to customers in their teenage years and 20s both domestically and internationally. “It’s not about just developing a fragrance that works here, it is something that should be understandable from a concept and fragrance standpoint in a lot of markets.”

Named for a phrase in the lyrics to the song “Moonlight” that’s often used to describe Grande, the fragrance Sweet Like Candy skews fruitier than its sensuous floral predecessor. Created with Firmenich, it contains top notes of blackberry, Italian bergamot and pear; middle notes of jasmine sambac, plummeria and honeysuckle, and base notes of crème de cassis, marshmallow, cashmere woods and vanilla.

“This one is a little bit younger and more playful, but, at the same time, it still has the sexy undertones that Ari has,” said Grande, speaking to WWD at Ulta Beauty in Marina Del Rey, Calif.

Like Ari, Sweet Like Candy is encased in a round geometric bottle evocative of Epcot at Walt Disney World, but it is matte pink rather than the previous bottle’s shiny pink and is decorated with a pink pompom rather than the earlier white pompom. “I’m a Floridian, so I would go to Disney almost every weekend with my family and going on the ride inside the Epcot ball was a huge part of my childhood. This is familiar to me,” said Grande of the bottle shape.

The pompom, she added, “is reminiscent of a bunny tail, and I like bunnies. The contrast between the hard-looking geometric bottle and the fluffiness is my thing. I always like pairing edge, masculine or hard-looking things with very feminine things.”

Originally, plans were for the Sweet Like Candy bottle to be a complete departure from the Ari bottle. Those were scraped in favor of a similar bottle that could possibly encourage fans to collect different variations on the overall design theme. “At first, we thought retailers would expect something new from her. When we presented it to the retailers, they loved it. Ulta has had the lead on this brand, and they felt it was absolutely right for the Ulta guest,” said Dodge. “It’s very feminine and happy. There is so much that goes on in the world, and this is a fragrance that celebrates having a little bit of fun.”

Grande, who has spread her wings in consumer goods by collaborating with MAC Cosmetics on Viva Glam lipsticks and Lipsy on an apparel collection, said the fragrance process remains novel to her. “I’m a musician and this is so foreign to me, but working with Luxe has helped me grow so much in a world that I didn’t even know I would want to be a part of necessarily. I have always loved perfume, but I never thought I’d have my own line,” she remarked. “My ambitions are to make my fans happy with the products I put out, and keep reinventing the fragrances and putting new spins on the classic Ari bottle and coming up with yummy smells.”

Advertising for Sweet Like Candy — which was directed by Hannah Lux Davis, who has made music videos with Grande, Nicki Minaj, Fifth Harmony, Cher Lloyd, Jessie J, Tinashe and Lil Wayne — depicts Grande observing a collision between a candy truck and an ice cream truck, inspiring her to whip up the fragrance.

“There are funny and unexpected aspects of the commercial. If you have seen her skits on ‘Saturday Night Live,’ she has a very funny side to her, and we are able to bring that out in this commercial,” said Dodge. “It’s a different and unexpected approach to content, but something that is very real to who she is and what her fans love about her.”

Grande’s work on her fragrance franchise is squeezed into an extremely tight schedule. Her third studio album, “Dangerous Woman,” dropped in May to promptly become the number-one album in the world, and she’s headlining the Dangerous Woman Tour beginning in February. Before the tour kicks off, she will play Penny Singleton in NBC’s “Hairspray Live!” airing on Dec. 7. Meanwhile, Grande is constantly trying to craft songs. “There is so much going on right now,” she said in an understatement.

Explaining her decision to sign up for “Hairspray Live!,” she said, “I am a musical-theater nerd, and ‘Hairspray’ has always been one of my favorite shows, and Penny has always been my favorite role in the show since the original Broadway cast with Kerry Butler in the role. Doing the show at this time is so important as well. The message is still so relevant.”

Turning to her upcoming tour, she said, “I really just want it to feel like a conversation between me and my fans. I want them to know that this show is for them. I want them to leave being like, ‘Hell yeah.’”

Luxe Brands is seizing upon opportunities connected to “Hairspray Live!” and the “Dangerous Woman Tour” to promote Sweet Like Candy. “Ariana is truly a businesswoman and her team operates looking holistically at the entire brand. For her tour last year, we worked very closely with them, and sampled and advertised to make sure her fans were seeing the fragrance,” said Dodge. “The way fragrance works best with an artist is that we all work together and the whole brand rises. It’s not about the fragrance over there, and the music over here. You see a consistent message throughout.”