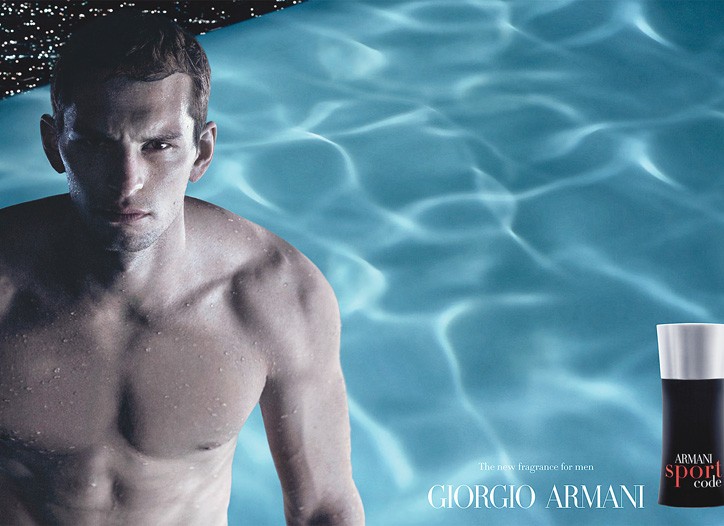 MILAN — Giorgio Armani Parfums is diving back into the market with the introduction of Armani Code Sport, a new masculine fragrance and counterpart to Armani Code Homme and Armani Code Femme launched in 2004 and 2006, respectively.

Yet, forget notions of playing fields and locker rooms, as designer Giorgio Armani has bypassed the usual sporty clichés, drawing inspiration instead from a cinematic encounter and the seductive nature of athletic strength to position his latest scent.

“I had in mind a story that would combine tension and seduction in a metropolitan setting,” said Armani. “I wanted the masculine physicality to be intense, powerful, in a way that would be an ideal reflection of the essence of Armani Code, a kind of sequel.” He underlined the roster of sportsmen, including David Beckham, Cristiano Ronaldo and Rafael Nadal, who have posed for his sultry ads and, “who represent the ideal image of male beauty, men with bodies accustomed to athletic performance and challenge.”

Model Chris Folz fronts the new fragrance. In TV ads he is joined by sultry actress Megan Fox — the face of Giorgio Armani Cosmetics — who reprises her role for the Italian fashion house. Code Sport’s steamy campaign is set at night by a swimming pool with a Los Angeles skyline providing the noir background. A new advertising saga starring the duo is also set to bolster the existing Code franchise.

The launch will be supported by TV spots, digital campaigns — including banner advertising on relevant sites like Facebook and YouTube — and 24 four million scent strips set to be disseminated in the second half, according to Marc Rey, president of Giorgio Armani Beauty, U.S. Rey said he’s expecting to reach a slightly younger audience via the scent’s advertising and soft-touch packaging — a slick black high-tech linear flacon with brushed metal cap, which warms to the touch and features a red logo.

Code Sport is slated to roll out from mid-April in Europe followed by Asia in July and the U.S. in August and to reach more than 20,000 doors. Giorgio Armani Parfums, part of L’Oréal’s worldwide Luxury Products Division, and the designer’s licensing arm inside the French beauty giant is aiming for Code Sport and Code Homme to become the top ranking masculine franchise globally, according to Véronique Gautier, president, of Giorgio Armani Beauty worldwide. Meanwhile, Acqua Di Gio, released in 1996, is expected to hold onto its top slot as the world’s number-one masculine fragrance.

“We plan on executing an aggressive plan,” said Rey, noting that he is shooting for a top-five position in the U.S. Although executives declined to discuss sales projections, industry sources indicate a target in the top five would necessitate a second half retail volume in the U.S. of $15 million, or $30 million for the whole year.

The new juice, blended by Jacques Cavallier from Firmenich, differs in its olfactory makeup from the oriental, sensual Code Homme, according to Gautier. Code Sport is said to combine a bouquet of mints and Sicilian mandarin to create its energetic kick. As Armani envisaged a scent with an enduring freshness, Cavallier blended a long-lasting Firmenich molecule dubbed Hivernal that plays a key part in the scent’s olfactory makeup and is intended to evoke the frozen freshness of ice. Ambrox gives the scent its contrasting sexy element.

Commenting on Giorgio Armani Parfums’ strong growth despite waning consumer interest in the sector, Armani credited coherent values as sustaining success. “From the fragrance to the packaging and publicity, the message never meanders, retaining a close link with my fashion,” he said.

In fact, ahead of the curve, Armani was one of the first fashion houses to pioneer a niche fragrance collection when he unveiled his Armani Privé line of haute couture fragrances in 2004.

“It’s true that the taste for craftsman-produced perfumes, a preference which I fostered and pioneered, is becoming a trend, a niche market, very sophisticated, but here to stay,” said Armani on burgeoning consumer interest for artisanal fragrances.

To this end, Gautier said the house has ambitious plans for the line that has reported fast growth after last year’s successful launch of the Mille et une Nuits collection, an eau de parfum trio of Eastern inspired essences. Gautier said the French beauty company is gearing up for a June launch of La Femme Bleue, an exclusive Privé perfume available in a limited run of a 1,000 numbered bottles, and set to retail at Giorgio Armani boutiques and selected perfumeries around the world for 500 euros or around $723 at current exchange. She said, “Our strategic focus is to grow whilst keeping a very exclusive distribution.”