On Wednesday, the company opened the doors to its third freestanding shop, located at 357 Atlantic Avenue in Brooklyn’s Boerum Hill neighborhood. 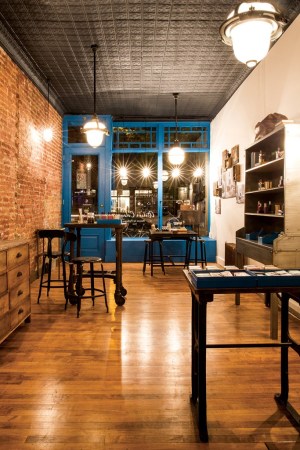 Atelier Cologne, which takes a curated and artisanal approach to fragrance, has big business plans.

On Wednesday, the company opened the doors to its third freestanding shop, located at 357 Atlantic Avenue in Brooklyn’s Boerum Hill neighborhood, and set in motion an ambitious expansion plan that will stretch as far as Asia. The fragrance brand also operates a boutique in Paris and a shop in New York’s NoLIta neighborhood.

Like its sister stores, the Brooklyn outpost is roughly 500 square feet in size, features exposed brick, wood floors and industrial furniture sourced from old French and American factories. An engraving machine, used to personalize leather fragrance pouches, is prominently featured in the window.

“We want our retail business to be as big as our wholesale business,” said Christophe Cervasel, who founded Atelier Cologne with his wife, Sylvie Ganter, in 2010. “Now, we want to open everywhere,” he added, noting the company is eyeing locations in Hong Kong, Shanghai and Dubai, where it is currently on a waiting list to enter The Dubai Mall. Cervasel and Ganter also are scouting out locations in San Francisco, Los Angeles and a second one in Paris. “We are becoming a retailer,” said Cervasel.

He added that the expansion plan is expected to help grow the company’s revenue by five fold over the next five years. Cervasel would not comment on sales figures, but industry sources estimate the company could generate roughly $13.5 million this year.

Atelier Cologne’s collection of 13 Colognes Absolues, each of which are created to communicate a specific story, are carried at 200 third-party retail doors across 15 countries mainly in Europe and America. In the U.S., its retail partners include Bergdorf Goodman and Neiman Marcus, and it is in 52 Sephora doors.

Its freestanding stores are designed to create an experience that goes beyond service, said Cervasel. “Every perfume has a story,” he explained. “We don’t talk about ingredients for the first half hour.” Yes, that is to suggest that visitors to Atelier Cologne mill around for awhile. “Many of our customers spend between an hour to two hours in the store,” said Cervasel. And perhaps more enviable, Atelier Cologne estimates that 70 to 80 percent of visitors to its freestanding stores make a purchase, said Gerard Camme, the company’s president and partner.

Each Cologne Absolue is available in three sizes — 200 ml., 100 ml. and a travel-size version of 30 ml. The price of the largest size ranges from $155 to $295, depending on the costs of the ingredients, and includes a 200-ml. spray, 30-ml. travel spray and leather pouch. The most recent addition to the brand is Collection Metal, comprised of two fragrances, Silver Iris and Gold Leather, which are housed in bottles covered in real silver and gold, respectively.

Ganter said, “We like to do perfumery in an old-fashioned way with a modern sensibility.”