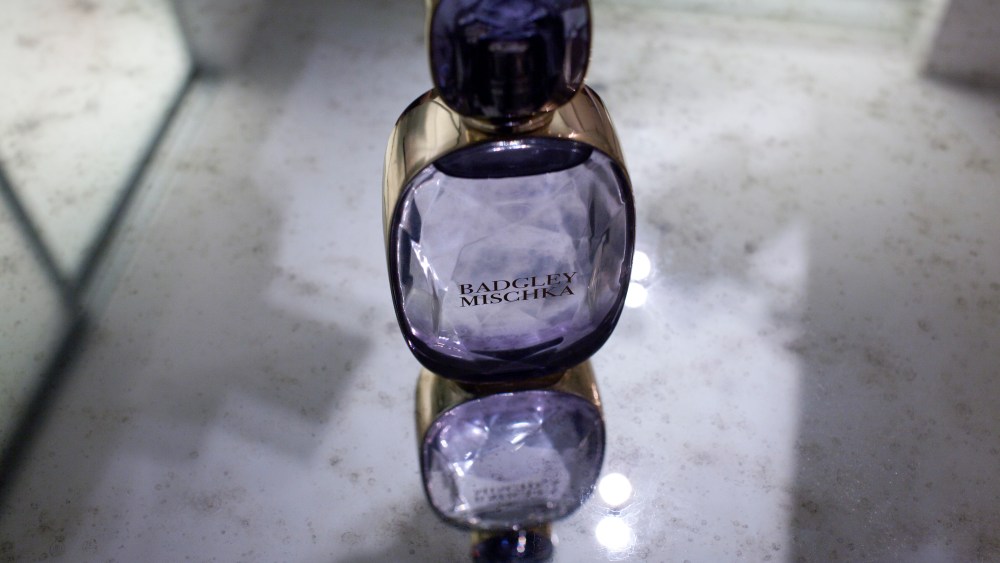 With 30 years in business under its belt, Badgley Mischka is reintroducing fragrance to its brand portfolio.

After a decade away from the fragrance market, Badgley Mischka designers Mark Badgley and James Mischka are celebrating their company’s anniversary with a new signature fragrance developed in partnership with TPR Holdings LLC., which signed a beauty license with the brand earlier this year.

This is the first fragrance Badgley and Mischka have created since they bought their brand back from Iconix in 2016. Industry sources estimate the fragrance will earn $20 million during its first year on the market.

The namesake fragrance reflects the glamour and femininity that the brand’s designs have evoked over the past 30 years.

“Our clothes are decorative and romantic, feminine and beautiful and the fragrance encapsulates all of that,” Badgley said. “There’s always this thread of glamour that runs through everything we do, whether it’s a coffee mug or a red carpet gown and there’s nothing to us that’s more glamorous than a fragrance.”

When creating the scent, the designers were inspired by the magnolia trees that grew at their horse farm in Kentucky and looked to perfumer Richard Herpin to create the fresh, floral fragrance. The designers also referenced the finale look from their spring 2018 ready-to-wear collection, a three-dimensional, hand-painted floral embellished gown, as another source of inspiration.

“As a fashion designer and just a visual person, this is a nonvisual version of design, so it was something that was really important to us to get out there,” Mischka said, noting the brand has expanded into different categories, like home collections in February and men’s shoes in May last year. “Fragrance is obviously a logical component of Badgley Mischka as a glamour brand, so it was a reason why we wanted to reintroduce it.”

The designers are leveraging their experience from previously working in fragrance, but they aim to do things differently for this launch by working with TPR Holdings. “The landscape in the U.S. in retail and the world is changing and the previous fragrances were positioned at the very high end,” said Brian Robinson, president of TPR Holdings. “We wanted to make this fragrance a little more accessible and perhaps a little bit younger because the younger consumer is a very attractive consumer.”

The fragrance, which is infused with notes of magnolia, tuberose, peony, amber and musk, will retail for $115 for a 3.4-oz. bottle, $60 for a 1-oz. bottle and $28 for a purse spray. The brand is launching the fragrance on its Web site starting in October and then will introduce it exclusively at Dillard’s stores and online nationwide later this fall.

While the brand’s previous fragrances were geared more toward its couture customers, the new signature fragrance is supposed to be more accessible in terms of price and positioning and is meant to be an entry point into the brand.

“Fragrance is one of those categories where if you want to participate in a brand, but you can’t necessarily afford a $3,500 dress, then you can still be a part of the lifestyle,” Robinson continued. “We wanted to take a lot of time to make sure that the entire fragrance presentation — the packaging, the juice and the visual — was elegant and on brand, but was also more likely to be attractive to a wider audience.”

To attract the younger consumer, Badgley Mischka will build a strong presence on social media by working with influencers, providing visual content and using paid advertising. The brand is also working with Scentbird starting in October to provide sample sizes of the fragrance in order to get feedback from younger consumers.

Going forward, Badgley Mischka has plans to evolve its fragrance portfolio with limited-edition scents, pillars and flankers of the original signature fragrance. A color cosmetics collection, which was announced when the brand signed its beauty license with TPR Holdings, is still in the works; however, the brand could not discuss a launch date.

“Badgley Mischka is sort of a dream for a lot of people, so fragrance is the perfect embodiment of that dream,” Mischka said. Badgley added: “Fragrance creates an aura that not that many other categories can create. It’s so special in that regard.”