Scent shakes up the notion of what is traditionally in a men’s scent and what is in a women’s scent. 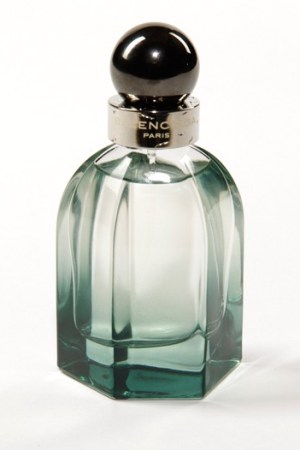 Nicolas Ghesquière and Coty Prestige are adding a new facet to the Balenciaga fragrance business this fall.

Ghesquière calls Balenciaga L’Essence — a companion scent to last year’s launch, Balenciaga Paris — a liquid enigma, concocted by shaking up the notion of what is traditionally in a men’s scent and what is in a women’s scent.

“Green fragrances are traditionally male,” stated the designer, whose muse for the scent was Charlotte Gainsbourg, who appears in the advertising visual. “However, the key to Balenciaga Paris is violet leaves. I wanted to draw on these almost conflicting inspirations, for women.” Of Gainsbourg, Ghesquière said he was inspired by her recent choices of films, her album and her performances. “I didn’t know that Charlotte. I wanted a fragrance that encapsulated the most private aspect of her,” he said.

The designer worked with Olivier Polge of International Flavors & Fragrances on the new creation, which is built chiefly around notes of violet leaves and vetiver.

“For both the fragrance and the ad, Nicolas wanted something that was both timeless and edgy, with a contemporary twist,” said Caroline Javoy, vice president of global marketing for the fragrance brand at Coty Prestige. “You’re not just buying the fragrance, but also a part of the brand. Both Balenciaga Paris and Balenciaga L’Essence have perfect symmetry to the fashion brand.”

The chypre scent is also intended to draw in a slightly younger consumer, noted Juliette Betant, marketing manager for the fragrance brand. She added that the audience for the Balenciaga Paris scent is about 35 to 50 years of age, while Balenciaga L’Essence will likely draw in consumers in their 20s who are attracted to the green, leathery notes.

Neiman Marcus will have a two-month exclusive on the collection beginning in September. The remainder of the brand’s U.S. specialty store distribution will get the scent in November. At full rollout, it will be sold in about 300 specialty store doors in the U.S. Overseas, it will be sold at David Jones in Australia, Harvey Nichols in the U.K. (which will get the scent in mid-July), Galeries Lafayette in France and El Corte Inglés in Spain.

Advertising, shot by Steven Meisel and featuring Gainsbourg, will begin in September fashion, beauty and lifestyle magazines. In fact, the shark’s tooth necklace Gainsbourg is wearing in the ad was the inspiration for the scent’s cap, noted Betant.