Balenciaga Returns to the Fragrance Game

Balenciaga is taking the plunge back into the fragrance market with a signature women’s scent, due out in February. 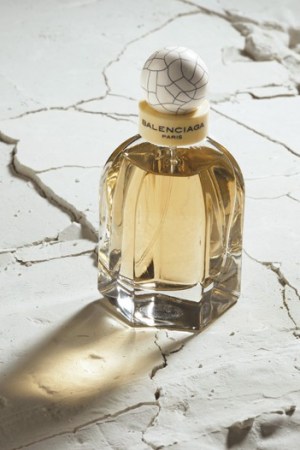 PARIS — Balenciaga is taking the plunge back into the fragrance market with a signature women’s scent, due out in February.

Called Balenciaga Paris, it is the first fragrance stemming from the partnership between Balenciaga and Coty Inc., which began in 2008.

Balenciaga designer Nicolas Ghesquière was involved in every aspect of the project.

“It’s really about redefining what was and what is today the world of perfume for Balenciaga,” he said.

Balenciaga Paris was Ghesquière’s first experience with fragrance creation. He worked on its juice with Olivier Polge of IFF.

“Looking for a smell is such a different process than building clothes or stores; I think it’s absolutely contrary to what we’re usually doing, which is about material reality,” said Ghesquière, sitting in his Left Bank Parisian headquarters. “To define a smell is such an abstract thing.”

Ghesquière was trained about scent. “It’s quite exciting to discover the basic alphabet of creating a fragrance,” he said, describing the process of mixing a juice as both artistic and mathematical.

He mined his memory for smells he liked. They included floor wax and flowers, such as violet and carnation, plus more urban odors, like gasoline, said Caroline Javoy, group vice president of Balenciaga, Chloé and Jil Sander at Coty.

Ghesquière said he wanted to give the floral fragrance a contemporary “twist” with something urban and slightly “metallic.” Early on, it was decided Balenciaga’s first scent would be in the floral chypre family — specifically, a violet chypre.

“Violet has been used in the fragrance industry for years, but normally more for the powdery effect,” said Javoy. “What Olivier did here was use the fresh, natural effect of violet leaves, and what’s new also is that the violet is really at the core of the fragrance.”

Polge integrated redistilled woods, such as cedar and patchouli, too.

“It is not a romantic floral,” said Ghesquière. “It’s definitely the mix of tradition and something quite contemporary and urban.”

Describing the bottle design, he said, “I had the idea of the prism, which is an element I always developed in the patchwork of the clothes, but also in the environment and the decoration of the stores and in the accessories.” He was referring to the futuristic plinths and portals in Balenciaga boutiques. “I knew it was not going to be a symmetrical bottle.”

Ghesquière also wanted transparency and a nod to the signature Balenciaga cocoon-shaped cape — although the form is fragmented and sharper in the flacon. There’s also a cracked effect present on the cap, reminiscent of Italian design from the Eighties, 18th-century enameled vases and the graphics of Balenciaga’s vintage fabrics with abstract prints.

“White and ivory are two strong Balenciaga colors,” said Ghesquière. “I wanted this fragrance to be a little character. It has a head, a neckline and a body.”

Balenciaga Paris’ streamlined outer packaging harkens back to the brand’s vintage boxes for fragrances (largely out of distribution), such as Le Dix.

Ghesquière’s muse, Charlotte Gainsbourg, who has posed in Balenciaga fashion ads, appears as the face of the new scent’s double-page advertising shot by Steven Meisel.

“Knowing that Nicolas was working on the project, I was secretly hoping for it,” said Gainsbourg.

In the ad, the left-hand color shot is a still life including the fragrance and some objects, like a column and an egg, referencing Balenciaga’s architectural and fashion heritage. In the right-side, black-and-white image, Gainsbourg sits on what appears to be a Spanish patio (alluding to Spain, Balenciaga’s birthplace). The black-and-white marble floor refers to what used to line the original Balenciaga boutique in Paris.

The new fragrance will be introduced in major European countries and the U.S. starting in February, and in Asia between March and April. Worldwide, Balenciaga Paris should ultimately be in just 2,000 to 3,000 perfumery doors, Balenciaga boutiques and on the Balenciaga brand’s U.S. and U.K. Web sites.

“We’ve been basically out of [the fragrance] business for almost 15, 20 years,” said Isabelle Guichot, Balenciaga president and chief executive officer. “It was important for us to wait until the right moment to really express ourselves back in the industry.”

The aim is to make Balenciaga Paris into a new classic, said Ghesquière.

“I am happy with the idea that for once we can share something [of the brand] with more women than just the ones that can afford its fashion and accessories,” he added. “I believe Balenciaga is a name for fragrance.”