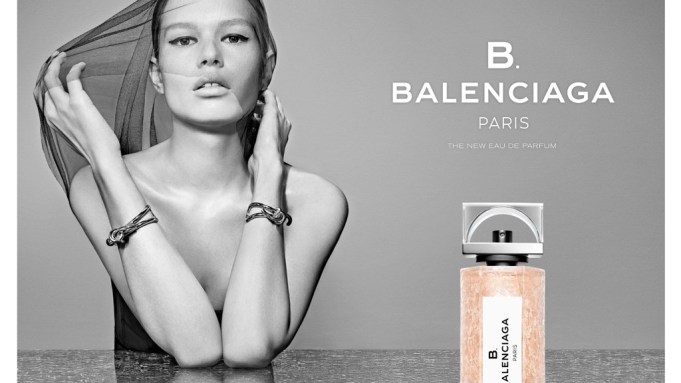 Alexander Wang is taking the next step in putting a new spin on a classic.

With his first fragrance, Wang taps into Balenciaga’s heritage, filtered through his own modern perspective. Wang, who was named creative director of Balenciaga in December 2012, relished the chance to try his hand at a new artistic endeavor in creating the new scent, B Balenciaga — a good thing, as he began working on it practically from Day One at the house. The fragrance is due on counter in mid-October.

“Each element was a process that took a lot of evaluation as to what’s been done before and what hasn’t been done before,” he told WWD. “It took a lot of soul-searching, but I really wanted to do something quite pure, as I see it as a step forward for the house. It was exciting working on the scent and going to the essence of the brand, to its DNA, and to also combine that with my vision. Designing fragrances and designing clothes and accessories are both emotional. But fragrance is much more scientific, while in bags, shoes and clothes, there are a lot of tech parameters. With fragrance, it’s a whole different ball game. I’m always up for a creative challenge, though — I love to explore and dig up why something has to work the way it does.”

Wang practices what he preaches as far as new creative challenges: He’s also collaborated with Beats by Dr. Dre to do a limited-edition collection of custom Beats products, including studio headphones and earbuds, and Samsung on a limited-edition charity backpack to raise funds for Art Start, a nationally charity which promotes creative endeavours to at-risk children.

The crackled glass of the fragrance bottle pays homage to the marble flooring of Balenciaga’s original salon at 10 Avenue George V in Paris — “The glass treatment felt very artisanal, yet refined, and the texture also reminded me of veins of marble and the marble theme that was in my first collection for the house,” noted Wang — while the exposed arch of the cap is intended to reference the arches found in Balenciaga’s modern fashion and accessories. The designer chose a six-sided, bold architectural design for the fragrance bottle, with a graphic panel bearing the fragrance’s name.

“I loved the idea of a cutout on the cap,” he said. “I didn’t want to base this project too much on the past, but also wanted it to be iconic to the brand. I want it to stand the test of time.”

The box is graphic with a large B, representing the fragrance’s name. The designer gave the industry a preview of the scent Wednesday at his pre-spring 2015 show. Equally graphic is the scent’s name. “I knew I wanted something straightforward, pure and simple,” said Wang. “Taking the name of the house and making it slightly abstract, but graphic, felt right.”

As for the juice, “I’ve always been attracted to scents with strong green notes, and we also added a darker woody flair to it,” said Wang. Top notes are of lily of the valley bell, violet green leaves accord and green edamame accord; a heart of iris root and cedarwood, and a base of ambrette seeds and cashmeran wood. Wang worked with International Flavors & Fragrances’ Domitille Bertier to craft the fragrance.

The lily of the valley in the scent was inspired by several things, including walks in Paris and the bridal bouquet of his close friend Vanessa Traina Snow, said Wang. Snow styled the advertising campaign for the fragrance, which features Anna Ewers and was shot by Steven Klein. “I knew I wanted to do a portrait of a woman, something mysterious with a veil, but not too restrictive,” said Wang. The final image features Ewers with a light veil shrouding her face and cascading down her shoulders.

Like the other two fragrances in the current Balenciaga offering, B Balenciaga will be sold in about 300 U.S. specialty stores — including Neiman Marcus, Nordstrom and selected Sephora doors, said Steve Mormoris, senior vice president of American fragrances for Coty Prestige. Globally, it’s expected to be in about 5,000 doors in total.

While executives and Wang declined comment on sales figures, industry sources estimated that the scent could do $40 million at retail globally in its first year on counter.