Antonio Banderas’ Secret Scent Slated to Be Biggest Yet 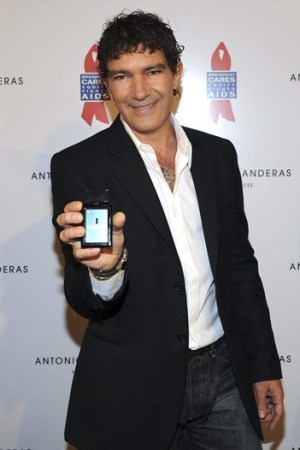 The Secret by Antonio Banderas, the seventh fragrance bearing his name, will hit midtier and mass market shelves in August. Puig executives think the fragrance — the company’s boldest, most upscale and priciest bearing the Banderas nameplate — will help men’s fragrance sales click.

Banderas believes it is a winner, too, and a fragrance that mimics brazen moves he is making, including displaying his photography, returning to Broadway and working on breakthrough films.

“[Puig realizes] I’m older and bolder and they have created a scent that reflects that,” Banderas told WWD at an event Wednesday night held at the Instituto Cervantes New York, where Banderas’ 23 provocative shots were on display. Seven have been auctioned off to benefit Broadway Cares/ Equity Fights Aids, a longtime Banderas charity.

José Manuel Albesa, chief brand officer of Puig, agreed the launch is notable for Puig and Banderas. “We are breaking the rules of the standard masstige business and bringing a fragrance to mass that was really conceived as a prestige fragrance,” he said adding that the juice and package are all the most upscale ever under the Banderas logo.

Banderas fragrances, despite launches from other big names such as Tim McGraw, remain the number-two celebrity house in men’s mass, drug and food sales, according to Puig.

Puig thinks men — or the women who buy fragrances for them — are ready to let loose. “The country is coming out of the recession and people are shopping differently,” said Didier Maine de Biran, vice president of Puig North America and general manager of Puig USA. He elaborated that customers today know mass stores stock prestige and masstige products and are choosing wisely. “Customers are receptive to quality, and we see an opportunity in the men’s masstige business for prestige that is also affordable.”

The launch also coincides with major initiatives from Banderas including the reprisal of his role as Puss in Boots in “Shrek Forever After 3-D,” his return to Broadway in “Zorba the Greek” and a much anticipated role in Woody Allen’s latest film. He’s also reunited with Pedro Almodóvar for a new film, “La piel que habito.”

Then there are the photographs Banderas shot in a studio that deliver an intimate and personal vision of the feminine world through a masculine perspective. He gives his own take on icons such as Carmen, Don Juan Tenorio and the Barbero de Sevilla in his work. Banderas added he was excited about the auction of the photographs because of the link to charity. “When I got involved with Puig, I knew it would be more than a commercial venture,” Banderas explained.

The many aspects of Banderas have contributed to his long-term success as a fragrance marketer — especially as many well-known names’ reputations ebb and flow.

“He is a multifaceted talent,” said Vanita Sabnani, vice president of marketing for Puig USA. “We thought it was time to take our fragrances a step further and be more daring in the product, the advertising and the public relations.”

The TV and print ads highlight Banderas’ sex appeal as well as his light, comic side with a dash of mystery.

The Secret also takes a brazen move in pricing, with the 1 oz. priced 5 percent higher than existing Banderas scents at $24. The 1.7-oz. eau de toilette spray is line priced at $31.50.

The packaging is very upscale with a metal front and a keyhole, which is also a major part of the advertising campaign. “We are ready as a company to take it to the next level,” said Ambika Kumar, brand manager of lifestyle and celebrities for Puig USA. “The look and feel of the product is prestige. Also, this scent will not take away from our existing products.” The target market is men ages 25 to 54, she added. At the launch, even jaded New Yorkers were overheard complimenting the packaging.

A retailer who will stock the scent said she is amazed at how Puig continues to reinvent the Banderas scents. “We have been pleasantly surprised to see each brand find its own audience. We especially do well with stores in Latin areas, although his appeal is universal,” the buyer said.

The fragrance, created by Elisabeth Vidal of the Puig Perfumery Center, in collaboration with Cristophe Reynaud of Givaudan, comprises what the company believes is a very prestigelike concoction. It has top notes of mint and white grapefruit; a heart of cinnamon, pepper and apple liqueur accord, and a base of tonka bean, woods, musk and leather. It is classified as a fresh oriental and spicy scent.

Puig also is elevating the position at store level with displays featuring testers. A variety of off-shelf displays will be available based on chain requirements. Selling points to help beauty advisers promote the fragrance will be emblazed on the back of the displays. As part of a fresh approach to Banderas, Puig also has introduced a slick new logo that updates the entire collection, as well.

The Secret makes its debut in the U.S., but will be introduced worldwide, according to Albesa.

Several people clamoring for Banderas’ time at the press event asked how he continued to stay so popular and young looking. The question gave him the perfect opportunity to answer: “It is The Secret!”