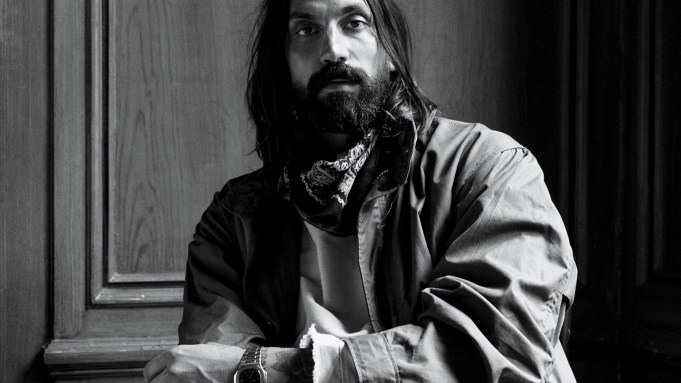 Following its own maverick path, the company has grown to have a retail global sales volume of more than $100 million, according to estimates by industry sources. Gorham and the rest of the company do not discuss sales figures. Its distribution network has grown to 300 doors globally in 65 countries with a more than six-year relationship with the Barneys New York stores and an entrance last fall into a dozen Neiman Marcus doors. The distribution strategy involves wholesale and freestanding units. Gorham began in his native Stockholm with a tiny 200-square-foot shop and culminated last year in a 1,400-square-foot store on Wooster Street in New York’s SoHo. He is now shopping for the next store in Europe, perhaps London, with Paris second on the list.

In terms of marketing, the storytelling aspect is not just hype. Jennifer Miles, vice president and general merchandise manager of cosmetics at Barneys New York, described Byredo as a top brand. “The scents are unique, unexpected and a bit disruptive in the niche fragrance world,” she said. “I think that’s why there is such a cult following for the brand. Every scent has a story behind it and I think our customers love to hear that story. When they spend time at the Byredo counter, it becomes a journey through scent and every customer can find a fragrance that they can connect with.”

Among his fragrance concepts are Night Veils, a collection involving flowers that bloom at nightfall, and the new edition, Night Veils Extrait de Parfum, which consists of three fragrances, priced $550 each for 30 ml., whose compositions were inspired by the craft of leather working. This edition will be launched in September. Another fragrance, Mojave Ghost, was designed in homage to a flower that thrives in the harsh desert of the Southwest. Rodeo, with a leather composition, was created as an exclusive to mark the opening of the Wooster Street shop. Super Cedar, which launched in March, was designed to evoke memories of simpler times — the pencil shavings of school days, log cabins and Scandinavian furniture.

Storytelling is clearly a theme. Gorham noted, “You can do the marketing and all the other things too, but at the end of the day, I believe that the product has to speak to the customer.”

That remark is typically Gorham, who exudes a sensibility of someone who is always searching for more. He is the restless soul of perfumery.

As a 6-foot, 5-inch former professional basketball player who became a pioneer of the artisanal fragrance movement, Gorham clearly shuns conventional thinking and prefers to explore less obvious ideas. Certainly he has broken ground by leading his fragrance-based Byredo into high-end handbags, topping off with a $28,000 alligator Maya model, and dabbling in accessories like a $300 folding knife with coins provided for good luck, upcoming Swedish blankets, as well as Oliver Peoples’ sunglasses and matching scent, based on a biological condition called “synesthesia” in which one sense, like smelling a scent, can affect another, such as seeing colors. The colors of the lenses were inspired by the hues of sunset in Los Angeles. “One of the reasons I launched the leather collection is that I’m not a big fan of labels and categories,” Gorham continued. “I was starting  to feel confined by a framework of an industry, which was dictating what we could do and not do.

“I just want to make products that people can identify with emotionally and that’s relevant. Some of that will fall into beauty categories, some of them will fall into accessories categories, and things like knives will fall into no categories at all and that will always be a big part of what we do.” About two years ago, the London-based Manzanta Group bought a majority stake in the company.

“Ben is a true visionary when it comes to his creative process,” said Miles at Barneys New York. “From totally unexpected scent collaborations with [NBA star] Russell Westbrook and Oliver Peoples, to branching out to leather goods, he is always thinking outside of the box.”

Global fragrance expert Michael Edwards agreed. “Ben has a very instinctive taste; he’s a visionary.” Edwards also gave credit to the creative teamwork between Gorham and his perfumer Jerome Epinette from Robertet, a relationship that was catalyzed by Pierre Wulff, a director at the fragrance supply house.

“It’s a continuous dialogue with Jerome,” Gorham said. “The better we know each other and the more work that we do, the better we get.” Byredo has marketed 24 fragrances and the team has developed a style, which builds on very few raw materials to give the components room to breathe. One example is Rose of No Man’s Land, which is basically built around two raw materials, a specific cedar wood and a rose note, Gorman said. He added a commercial scent may adopt the same notes, “but then because of focus groups, you’ve got another 80 raw materials that create this.”

Gorham also believes in creating strong signatures on his fragrances because “that’s what people remember.”

One emerging trend Byredo has discovered in reflecting back on the last 10 years is social media has plugged the younger generation into the olfactive scene. “With these younger groups of customers, there was a dialogue that was very important, which had them expressing their association and connection to smell, getting people to talk about what smells mean to them in a very personal way.”

To translate the idea into cyber terms, Byredo created a microsite of Byredo.com for customers to create their own ad campaign by uploading a personal picture, customizing a bottle, positioning it and scaling it before finally posting it “in kind of a digital library.”

Hesitant to dictate impressions of the fragrance, he only mentioned amber and violets as notes. The Unnamed limited-edition scent also contains pink pepper, spicy and fruity accents, a gin accord, Irish root, moss and woody balsam fir.

The Unnamed fragrance will be launched Sept. 1 in key Byredo doors, such as Bon Marché in Paris, Liberty in London and the six Barneys stores. The rollout will be on Sept. 15, followed by an anniversary party in Paris on Sept. 28.

“Byredo has the potential to become one of the more established beauty brands on the market. When I say beauty, it is not limited to fragrance,” Gorham said. He has been working on a color cosmetics line, and the Byredo founder acknowledged that skin care is also on the list “and then beyond.”

The color cosmetics collection is too early in development to cite specifics, he observed. “It’s challenging, technically, but progressing. After taking a step into leather goods, it’s nice to come into a very specific beauty reference, in a very established market.” He elaborated, “unless you’re a makeup artist, it’s often an extension of other values and ideas, as it is for us. But I think it has to stay very true to the brand. Initially it has to appeal to our existing customers and the way they live and interact with the product today.”

Fragrances and handbags seem like an odd combination, but not to Gorham. “There was always this idea that Byredo could evolve and I could add facets,” he recalled, starting the process nearly three years ago.

He confesses to a passion for working in leather. There also was a challenge to winning over a market. “I work with a very old European idea of patina, leathers aging beautifully,” he said. “We live in world where a lot of people expect things to look brand new and again there is this level of education where we teach people that a timeless leather bag will age beautifully and become quite unique.”

The bag collection was launched last fall with the opening of the Wooster Street store. Distribution is otherwise restricted to Barneys. Gorham, who has noticed an upsurge of handbag brands in the market in the last 12 to 18 months, said “handbags have become a category that everybody, regardless of positioning, is trying to activate, just like they did in beauty 10 or 15 years ago.”

Gorham’s roving curiosity reflects his upbringing: Born in Sweden, he grew up in Toronto, finished high school in New York and played pro basketball on European teams as a point guard and sometimes a shooting guard. That took him back to Europe: Italy, Germany and finally Sweden, where he went back to school. Robertet’s Wulff introduced him to perfumery and became his mentor.

But Gorham remains an avid basketball fan, closely following the career of Russell Westbrook of the Oklahoma Thunder. He even has an NBA Game Time app and says he watches a game every night before going to sleep, “even during summer leagues.”

When asked if he still plays, Gorham smiled and answered, “I play my daughter, Ines, she’s seven; it keeps my confidence level high.”