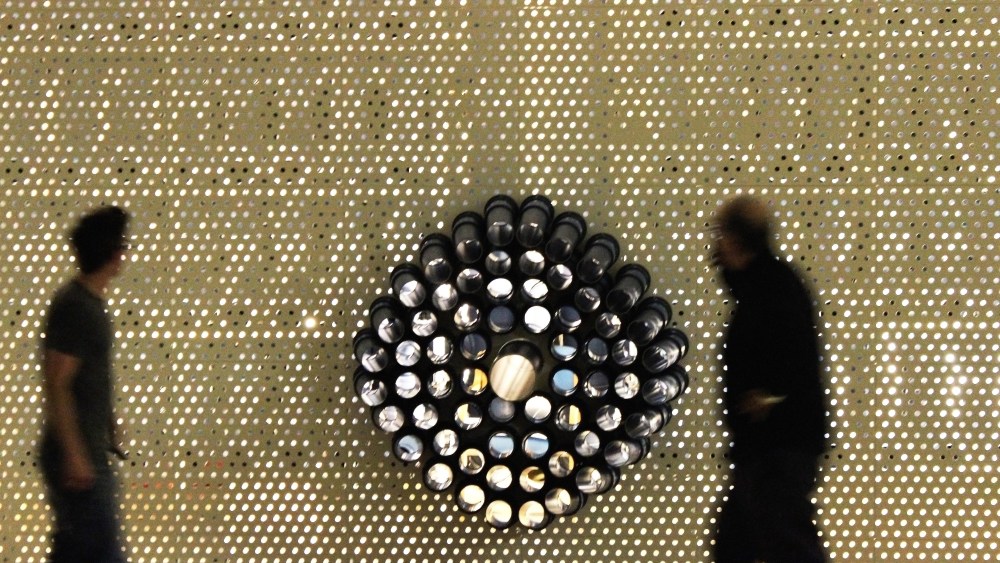 BERLIN — There’s something in the air in Berlin. A whiff of grass, a hint of horse, a pungent waft of garbage can — theater for the nose. It’s all part of Osmodrama, a festival for olfactory art created by Austrian artist Wolfgang Georgsdorf, who has been integrating smell into his work for the last 30 years.

The two-month-long event features collaborations with various artists — concerts, sound art, workshops, films, even aromatized audio books. All are influenced or accompanied by scent, but not perfume. The odors are emitted from “smell organ” Smeller 2.0 — an ominous octopus of pipes behind a perforated screen that pushes scented air into a custom-made tentlike room.

“It does stream things that are not always pleasant,” admitted Georgsdorf. Still, he noted, “Even the most unpleasant sources are used in perfumery. The skatoles, the indoles, the smells that are representing rotten flesh, carrion. All these things are even used in the vocabulary of wine tasting. And they have to be integrated into our poor language for scents and smells so far.”

Georgsdorf, who creates interdisciplinary, often immersive artworks, has been composing for the complex machine, considered a “functional sculpture,” since 2012. The results have been presented globally at film festivals, musical performances and exhibits, generally accompanying images or sounds.

But in Berlin, the festival kicked off with pure smell, with the debut of Georgsdorf’s Autocomplete, a 54-minute long “synosmy,” or smell symphony of an overture and  six movements, including ones based on nature, cooking and industry.

During the performance, the audience sat, many with closed eyes, while new scents were emitted every 10 seconds. Effluvia swelled, cross-faded and diminished, evoking both harmonies and dissonance, narrative and nightmare.

The composer has 64 notes at his disposal: their dispersal is controlled by a sequencer designed for DJs. Smeller 2.0 can also be played live with the use of two keyboards — one for the scents and one for blasts of fresh air to modify the intensity.

The odors the device emit do not linger, making it possible to create scent sequences that match or complement actions or sounds. While the scent organ plays, a light hum can be heard and occasional gentle pops, the lids to the tubes closing after releasing the blasts of scented air. It’s all the result of painstakingly calculated air pressure and flow.

“A time-based use of smells is a completely different approach than I’ve found in other scent artists,” Georgsdorf insisted. “It’s about time to have this collective experience in a concert situation where you sit with other people.”

Georgsdorf’s scents were created with maverick perfumer Geza Schön, who is best known for his Escentric Molecules line, from fragrance and flavor materials provided by IFF. After the opening, Schön said he was happy with the performance, with an exception or two.

“The onion will be gone,” he insisted, referring to a sharp note that smelled more like garlic salt.

Smeller 2.0 also uses some pungently natural elements — like the residue of actual fish heads, though the note can also be effectively simulated with a synthetic lobster flavor, Georgsdorf said.

The Osmodrama project was sponsored through micro-funding and money from the Ernst Schering Foundation, which promotes the interface of science and art. Osmodrama also received crowdfunding via Kickstarter, raising 36,088 euros, or $40,311, from 156 backers. And while the festival highlights an emerging art form, Georgsdorf hopes it will encourage awareness of what is possibly the most neglected of our five senses.

“People are dying to talk about smells, and have very few attractive opportunities to do that beyond perfume,” he said.

Osmodrama’s scented screenings, concerts and lectures are open to the public, with entry costing between five euros, or $5.65, and 16 euros, or $16.75. The festival runs until Sept. 18.