Coty chief Bernd Beetz is leading the charge in the resurgence of designer fragrance and continued strength in celebrity endorsements. 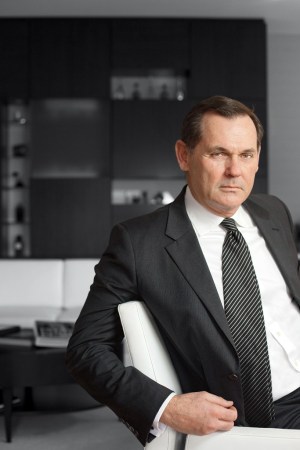 In 2002, he resurrected the moribund celebrity fragrance concept with the launch of the Jennifer Lopez scent, Glow by JLO, touching off a deluge of competitive, high-profile showbiz introductions that reinvigorated the entire fragrance market. While the decibel level in the celebrity category was turned up several notches this year by two competitive entries from Justin Bieber and Taylor Swift, Coty will come roaring back next year with introductory fragrances by perhaps the two most heatedly sought-after names in the entertainment world — Lady Gaga and Madonna — leaving the company firmly on top of the celebrity heap.

There has been much talk during the past 12 months about a resurgence of designer brands, which constitute the bulk of the fragrance market. Some fashion labels have sat on the sidelines for the last couple of years during the celebrity binge. Not Coty; it invented what Beetz calls “ultraprestige,” on the flip side of the fragrance coin. This group includes the Marc Jacobs franchise, whose Daisy Eau So Fresh brand extension was one of the strongest fragrances launched in the women’s market this year.

In addition, Coty answered the challenge posed by Unilever in the mass market with its Axe fragrance by signing a deal with Playboy, which industry sources expect to generate $400 million in retail sales within two years.

“I have a very strong credo — innovate or die. We live by that,” Beetz said. His strategy was to put together “the strongest team in the industry,” a group of people who “live to create.”

He is proud of having built a strong culture that has a passion for creation and can push the company ahead of the curve. “We helped to reinvigorate the fragrance category,” he added.

Since taking the reins in 2001, Beetz has transformed Coty from being “barely on the map,” as he once put it, to a fragrance powerhouse with $4.3 billion in sales. During an interview for an article in the May edition of WWD Beauty Inc., Beetz said his goal is to nearly double sales by 2015 and create a global beauty giant. Coty now ranks as the world’s 12th largest beauty company.

“It’s faster, further, freer,” he said of his strategy. “When you see an opportunity, you move. We wanted to be a leading player in fragrance, and that’s what we accomplished. We want to be a strong number two in color cosmetics worldwide…and we want to be a stronger player in skin care.”

Late last year, Beetz shrewdly made a series of acquisitions, including the American-based Philosophy, which is the fourth-ranked prestige brand in the U.S. department store market, and TJoy, which is among the top 10 treatment brands in China. The move reflected a broad-based shift in the market toward skin care, which was the strongest gaining category in U.S. department stores in 2010.

Another surge has been building in color cosmetics. The NPD Group recently reported that makeup sales gained 8 percent in dollars for the first 10 months of this year, through October. Moreover, the fastest-growing segment within color was nail products, which leaped 59 percent. This confirmed the belief by market watchers that nail enamel has been the hottest business in the beauty world this year, an impression bolstered by a string of acquisitions. One of the most prominent was engineered by Coty when it snapped up the edgy OPI. This move followed the 2007 purchase of DLI Holding Corp., with its market-leading nail care brand Sally Hansen. Coty also continues to expand its Rimmel brand with Kate Moss as its face.

During the interview last week, Beetz said his strategies include treating nails as an accessory and a lead category in color. “The nail category is now surpassing lipstick,” he said.

Beetz has not ignored the mainstay of the business. Four years after his arrival, he engineered an $800 million acquisition of Unilever’s prestige fragrance division, which brought with it the crown jewel, the Calvin Klein fragrance franchise, along with Vera Wang and Chloé.

But it was Beetz’s prescient and richly winning gamble on celebrity deals that set Coty apart. The first Jennifer Lopez fragrance was coming out just as America was entering its celebrity craze, where it remains. According to fragrance expert Michael Edwards, there were 73 celebrity fragrances launched globally this year, 65 of them in the U.S. Although celebrity accounts for just 4 percent of the women’s market, according to NPD — and the category’s demise has been predicted for years — Hollywood names continue to rivet the public’s attention.

When recently discussing plans for the Madonna fragrance, Beetz declared, “This is a great category. You have to follow the zeitgeist. We have to be close to the consumer. It’s really working.”