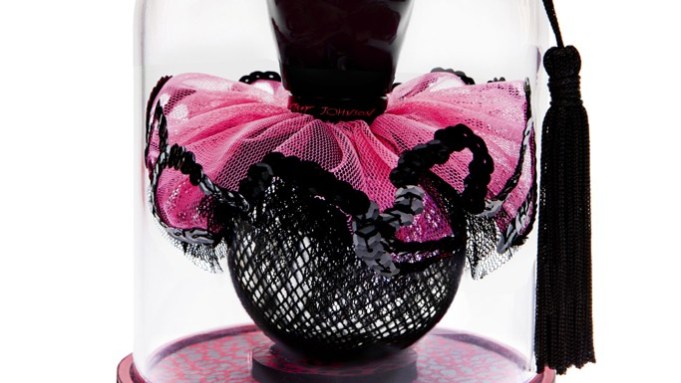 Never one to hold back, the famously free-spirited Betsey Johnson doesn’t mince words when it comes to her new fragrance, Too Too: “I have to love the perfume, otherwise I can’t bullshit my way through selling it.”

“You have to love the perfume before everyone else does,” said Johnson, during a phone interview from her Manhattan showroom. “You have to get compliments, or what’s the point?”

Hence, her latest scent, which she has developed with fragrance licensee Inter Parfums USA LLC, will launch at all 292 of Sephora’s doors in North America in mid-October. It will be previewed at her Sept. 12 ready-to-wear show, the designer said. “I thought of basing my show on it, but I decided it was silly because I have to do a promotional event and I should use my show for something else,” she said.

Johnson noted that the scent was inspired by her love of dance and the female form. “I started collecting old Schiaparelli perfume bottles years ago, and I have a collection of corsetry perfume bottles, including all of Gaultier’s,” said Johnson, who started her fashion label in 1978. And she’s not shy about what inspired her to create her own scent’s bottle. “I just had to go there, had to do the most me thing, which is the tutu ballerina, sexy leotardy look with poofy details. That’s my look, that’s what I am. It could be my tombstone and that would say it all.”

“It’s not fresh, it’s not sea breeze or green or unisex or strangely interesting,” she said. “It’s extremely sexy, playful and edgy.” It’s also on the heavy side, by design. “I have to wear perfume very heavy, so I get either compliments or ‘ugh!’”

Patchouli was a must, said Johnson: “In the Sixties in San Francisco I bathed in patchouli every day,” she reminisced. “Everyone hip and cool reeked of patchouli oil. In fact, I got thrown out of a department store beauty department. They said it was impossible to sell perfumes while I was there reeking of patchouli.” She’s also fond of jasmine, sandalwood and rose. “It ended up like a good minestrone soup,” said Johnson. “It’s all good together.” The top accord was perhaps the most challenging: “The hardest thing in doing a perfume is right off the bat people have to love the bottle, but it also has to smell good on the first squirt — which is different from how it ages and melts into a body,” said Johnson. “I could make the scent 20 times heavier because I like heavy, but it works right out of the bottle.”

The bottle, naturally, is a woman’s torso (balanced with a weighted round bottom) with a lightening bolt tattoo over the corseted bodice, with a black sequin-edged pink tulle skirt and a bottom of black fishnets. “We should do that outfit for retail,” she says as an aside to an assistant before noting that she’s planning to wear a similar outfit during store visits to promote the fragrance.

And the bottle form is, well, well-endowed. “OMG, did we give her [the bottle] boobs,” said Johnson. “I really love that she’s a busty babe. Anyone can be a busty babe without silicone or saline or foam, if they buy my bras.” Breast health is also a key concern for Johnson, an 11-year survivor of breast cancer. “One of my implants deflated over a month. That’s how I found out I had breast cancer — they took out the implant and found a lump the mammogram had missed. I love to do appearances for breast cancer month in October, and so that is a perfect kickoff month for me with the fragrance.”

Sephora has booked events in New York City and Santa Monica, Calif. “Perfume is all about promotion and hype,” said Johnson. “In partnership with Sephora, it’s going to be incredible. It won’t get watered down in stores all over America. It’ll be like girlfriends celebrating.”

The outer packaging includes a clear dome. “It was my dream — I have these old antiquity things with glass globes, and I’ve always loved that precious thing in a glass globe, like restaurants that come out with silver covers over the dish and say ‘tah-dah!’” said Johnson.

And despite the dance overtones of the name, it is actually intended to convey the exuberant, larger-than-life nature of the scent, said Johnson. “It’s not the ballerina French tutu, but an American expressive — Too Too.”

The collection includes eaux de parfum in three sizes — 30 ml. for $42, 50 ml. for $62 and 100 ml. for $82 — as well as a 6 oz. body lotion, $28; a 0.3 oz. rollerball, $18, and a $62 gift set which includes a 50 ml. fragrance, a train case and a 6 oz. body lotion. The scent will launch at Sephora in mid-October, and the retailer has a six-month exclusive. Jessica Hanson, director of fragrance merchandising for Sephora, predicted that “Too Too is going to be one of the hottest fragrance launches of the fall season.”

Next spring, distribution will be expanded to a to-be-determined lineup of department and specialty store doors, said Andy Clarke, president of Inter Parfums USA LLC. International distribution is also on tap for 2012, said Clarke, who added that Asia, the Middle East and the U.K. are likely targets for growth.

Kellie Como, vice president of fragrance and product development for Inter Parfums USA LLC, noted that Johnson’s exuberant personality led to a variety of unusual sampling concepts, including hot pink fake hair swatches spritzed with Too Too. The promotional lineup includes a large digital campaign on Facebook and Twitter, said Mary Ellen Myers, director of sales, specialty store division, for Inter Parfums USA LLC. While all executives declined comment on projected sales, industry sources estimated that the scent would do at least $15 million at retail globally in its first year on counter.

This is Johnson’s second crack at fragrance: She launched an eponymous scent in September 2006 with Colorful Licenses and the Karis Group Ltd. which is no longer produced. But she’s ready to create her next fragrance. “If it’s successful, we’ll be working on the next one tomorrow,” she said.