Her newest scent, called Beyoncé Rise, is designed to go beyond the sensuality and electricity of her stage persona to reveal a bit more of her personality. 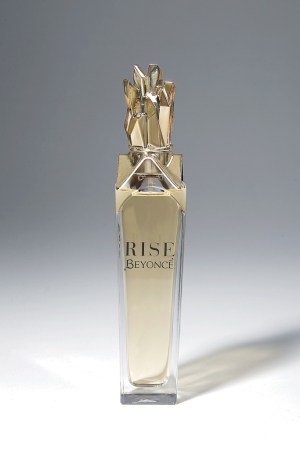 Beyoncé Knowles is opening up and getting personal.

This story first appeared in the December 20, 2013 issue of WWD. Subscribe Today.

Her newest women’s fragrance, called Beyoncé Rise, is designed to go beyond the sensuality and electricity of her stage persona to reveal a bit more of her personality. “The fragrance concept is a about female empowerment and finding the inner strength that makes women so beautiful,” said Marsha Brooks, vice president of global marketing for fragrances in the Coty Beauty division of Coty Inc., which holds the license for the superstar’s fragrance business. There is a strong sense of “overcoming adversity and rising above it all.”

The ice was broken in February when Knowles appeared in the HBO film “Life Is But a Dream.” Brooks observed, “This was a big deal for her to really exhibit her personal life and struggles, as well as her professional life. It’s just Beyoncé sharing more and more with her fans.”

Now she is on a more-than-90-show tour and made a surprise release of her fifth album, “Beyoncé,” via iTunes at midnight Friday. The new fragrance is due to be shipped in the beginning of January so the scent will be on counter at the beginning of February. Brooks noted that distribution will consist of 30,000 doors globally.

This new fragrance is the singer’s third pillar to be launched since the 2010 introduction of Heat, which was designed to capture her sensuality. That year the debut fragrance hit number one in a variety of markets around the world and set a one-day record at Macy’s with $75,000 in sales.

The second pillar was Pulse, a fragrance whose positioning was intended to capture the electricity of the star’s onstage performance persona.

“We getting a little bit more intimate and personal with this next initiative we are doing,” Brooks said referring to the female empowerment creed of Rise. “The time has come for something more natural and emotional.” She said the positioning was influenced by a poem by one of Knowles’ favorite poets, Maya Angelou.

The scent, described as an “intoxicating, addictive luminous floral,” was developed by Loc Dong of International Flavors & Fragrances.

According to the perfumer, the heart of the formula is gold symphony orchid, known as the queen of orchids. That note got an extra shot of personality and color when it was paired with golden apricot. There’s also a strong jasmine element. In addition to the apricot, the top note consists of Italian bergamot and iced basil sorbet. The gold symphony orchid is in the midrange, along with freesia blossom and natural jasmine sambac.

The base is composed of autumn woods, cashmere musk and vetiver extract, which are meant to ground the fragrance and give it additional sensuality and texture.

Brooks described this scent as very different from the other fragrances.

“[Knowles] has done a lot of fruity florals,” the executive noted. “She’s done gourmands. Pulse was this electric citrus-y floral. This is sexy and sophisticated. We tested it in multiple countries with excellent results.”

The bottle, with its gold accents, was designed by Ken Hirst with the idea of conveying a sense of ascension, melody and emotion. The secondary packaging was designed by Chad Lavigne.

As for promotion, Jake Nava shot a TV commercial, which will be shown in 15- and 30-second versions. In terms of social media, Coty plans to focus on Facebook, where the star has a base of more than 350,000 fans on her fragrance page. The company also wants to capitalize on Knowles’ new music with promotional tie-ins.

Coty does not divulge figures, and no sales or promotional budgets were broken out. But industry sources calculate that the new Beyoncé fragrance could hit a retail sales target of $25 million during the first year on counter. Similarly, the promotional and advertising is estimated by sources at $10 million.