Beyoncé talks about Beyonce Heat fragrance which is set to debut in February, her husband Jay-Z's birthday party, and her 10 Grammy nominations. 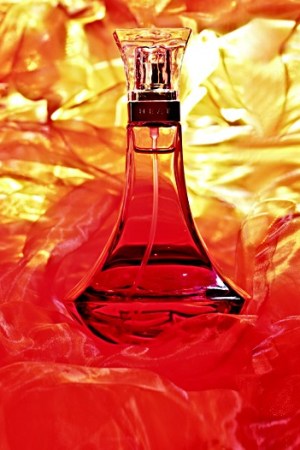 Beyoncé Knowles is aiming to light a much-needed fire under the beleaguered fragrance business this February with her first scent, Beyoncé Heat. Industry sources estimate it could do $100 million at retail globally in its first year on counter. At least half of that figure is expected to come from U.S. sales.

And the entertainer — who is up for 10 Grammys on Jan. 31 — is more than up for the challenge. She can’t wait to get her scent into the hands of her fans.

“I’m so happy with it,” she said during an exclusive interview with WWD. “I’ve been working on it for a while now. I was on tour for a year, and I have meet-and-greets with fans. I’ve never in my life gotten so many compliments. Coty has their own testing, but that was my testing! The fans loved it. They were like, ‘I love that, I’m getting that, why isn’t it out right now? I need it!” said Knowles with a laugh.

Her fans’ passion helped spark the development process. “What inspires me [both in music and product creation] is love, passion — something that makes me want to be better, to do more,” she said. “Knowing that I have people who look to me — because thank God I’ve had so many great opportunities — I don’t take it for granted. Young girls can see me, and think, ‘Wow. Maybe if I work hard and I’m focused, I can do the same thing.’ And they absolutely can. It’s not just about me being a singer. It’s about knowing that I have people who look at my life, and to know I can inspire them inspires me.”

For the fragrance’s name, Knowles drew from her past tours. “A lot of my performances have had fire involved, so we thought ‘Heat.’ Also, red is one of my favorite colors, as is gold,” she noted; both colors frame the bottle. “So then we thought of making the bottle look like it’s on fire. I love antique bottles — my mother had a collection of them when I was growing up. I wanted something with an antique yet modern feeling. Even with my wardrobe, I always try to find things that have a little bit of something vintage, yet still timeless and classic. The bottle, I felt, was a great mixture of the two.”

The juice, which Knowles concocted with Givaudan’s Claude Dir and Olivier Gillotin, has top notes of red vanilla orchid, magnolia, neroli and blush peach; a heart of honeysuckle nectar, almond macaroon and crème de musk, and a drydown of giant sequoia milkwood, tonka bean and amber.

“This was my first time starting from scratch, although I’ve worked with a few other fragrance projects,” said Knowles, who has also been the face of Tommy Hilfiger’s True Star and Giorgio Armani’s Diamonds. “Everything, from the bottle design to the name and the ideas for the commercials — that’s me. When I commit to something, I do it 100 percent, and I’ve never had [creative control over a fragrance] until this project. I learned a lot of great things from the past — but I always asked myself, ‘If I could have my own scent, what would it be?’ I wasn’t worried about deadlines. It could have taken me three, four, however many years — this was my first fragrance, and I wanted to make sure that it was something I would love forever.”

“We will explore all of the different sides of Beyoncé with future fragrances, but Beyoncé Heat is meant to be the enduring classic,” said Mormoris. “We think this scent will re-energize the celebrity category.” Mormoris declined to discuss how large a house of Beyoncé fragrances could be, although industry sources estimated a Knowles-branded fragrance collection could represent a $300 million market opportunity within a few years.

In addition to its U.S. distribution — about 2,000 department and specialty store doors, including Macy’s — the collection will be available in Canada and Latin America in February. Additional global distribution — including Europe, the Middle East, the Far East and Australia — will begin in August. In-store, the bottle will be on a rotating platform meant to show off its facets and graduated coloring. The top of the bottle is edged with a gold band, inscribed with the words Beyoncé and Heat, and topped with a cap etched with the letter B.

Both TV and print advertising — with the tag line “Catch the Fever” — will accompany Beyoncé Heat’s launch. “It’s called Heat, so we wanted the ads to be really steamy and dewy,” said Knowles. “My sexiest moments are when I’m just getting out of the tub or the shower and I’m clean, so I wanted to incorporate that in the ads. The dress was this liquid-y satin. The song ‘Fever’ I did years ago and always loved it. [For the commercial] I got to sing it a bit more whispery, more natural.”

The TV ad was directed by Jake Nava, who also shot Knowles’ videos “Single Ladies (Put a Ring on It),” “If I Were a Boy” and “Beautiful Liar.” Print advertising, shot by Michael Thompson, depicts a sultry Knowles in the same dress worn in the TV campaign. The ad, which will be available as single- and double-page spreads, will begin running in February fashion, beauty and lifestyle magazines.

While executives declined to discuss advertising and promotional spending, industry sources estimated that Coty Beauty would spend at least $20 million on advertising and promotion in Beyoncé Heat’s first year on counter. About 70 percent of that figure is expected to be in media spending, with the overwhelming majority of it to be spent on TV ads. As well, the brand is targeting at least 40 million scented impressions.

An intensive Internet campaign is planned, noted Jerôme Dujoux, global marketing director, fragrance division, for Coty Beauty. A teaser Web site, Readytocatchthefever.com, goes live today, with an e-blast to Knowles’ fans on Facebook and MySpace. A unique Facebook application, How Hot Are You?, rates a user’s profile on its “Fever Meter.” It is designed to allow potential purchasers to see just how sizzling — or fizzling, as the case may be — they are.

Knowles will also make an appearance to promote the scent at Macy’s Herald Square on Feb. 3.

Right before that appearance, however, Knowles will face the 52nd annual Grammy Awards. “To be honest, I haven’t really wrapped my head around it,” she said of her 10 nominations; she ties Lauryn Hill for most nominations for a female artist in a single year. “I was just away and planned this really big party [husband Shawn “Jay-Z” Carter’s 40th birthday party in the Dominican Republic] — so many details. I was so into that that when I got the news, I didn’t really think about it. It sounds crazy, but I’m still like, ‘No, that’s not true.’ I have to read it somewhere to believe it!

“I feel so great, because my heart and my soul are in this record, and I took my time with it,” she continued. “I took a lot of chances, and it’s rare that people allow you to grow up and mature in your music when they reach you at 15, like me.”

Knowles is also hard at work on her fashion line. “We just shot our next ad with Tony Duran in Greece,” she said. “And the clothes are beautiful — we did a Sasha Fierce line with a lot of studding and denim and shoulder pads, very sexy and cool. And the House of Déreon dresses are so elegant. I think the clothes and the ads keep growing and evolving. We also have amazing accessories — we have great shoes, hosiery, lingerie. We just got a new hat license.”

While Knowles won’t stay away from the recording studio for long — “It’s like therapy for me, I love to do it,” she said — she’s pursuing yet another developing passion: directing. “Right now, I am learning Final Cut Pro and learning to edit — I just directed my [tour] DVD,” she said. “I was figuring out exactly where I wanted the cameras to go, who I wanted to be the ADs [assistant directors]. I had eight months to figure that stuff out, so I did it slowly. I already do my own little mini movies, so hopefully I’ll get more into that and develop my production company, and maybe I can direct other performance DVDs and videos.”

She’s also planning more movie roles: “I’ve gotten a lot of great scripts, and it’s difficult for me to pass on some of it because I would love to do everything. I have to learn to sit down for a second!”

To those who suggest she might be courting burnout, Knowles disagrees. “It’s hard to balance out everything that I do, but they are all things that I love and am passionate about — so you just make time. It’s a lot easier when you love it, you know?” she said. “It’s like anything else: I just try to balance and focus on one thing at a time, not do a movie and an album all at once. I don’t jump into things right away, whether with my movie career or anything else. I still haven’t been the star in a movie. I’ve been very conscious to work with people that are great, who have been doing it longer than I have, so I can learn from them before I have that pressure. With my videos, I did probably 40 videos before I finally decided to direct one. I worked with other beauty companies, but I waited until I knew exactly what I wanted before I did a fragrance. I don’t just jump into things and try to do everything — I try to really learn and make sure I’m ready.”