Frenzied fans may have narrowly missed trampling the performer at Macy’s last month, but they went on to trample industry sales records. 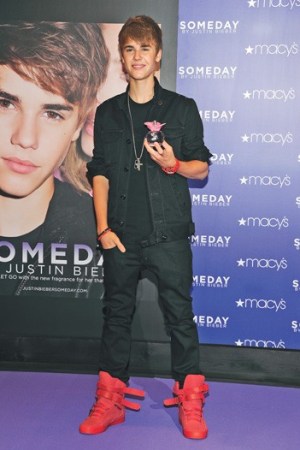 Frenzied fans may have narrowly missed trampling Justin Bieber at Macy’s last month, but they went on to trample industry sales records by buying hordes of the singer’s first prestige fragrance.

After Bieber’s personal appearance on June 23 at Macy’s Herald Square, his women’s fragrance, called Someday, netted more than $3 million in retail sales at Macy’s in less than three weeks, said industry sources. Someday also humbled the beauty establishment, and some experts are characterizing it as the most successful celebrity fragrance launch in history.

It was the top-selling prestige fragrance in the U.S. during the two-week period ended July 2, according to The NPD Group Inc. “If it sustains this momentum, it will become the number-one-selling fragrance of 2011,” said Karen Grant, NPD’s vice president and senior global industry analyst. “We haven’t seen anything like it since [Jennifer Lopez’s] Glow and [Britney Spears’] Curious.”

Take that, naysayers, who questioned the concept of a girl’s scent fronted by a 17-year-old boy.

The fragrance — which has a top fashioned like a heart-shaped flower — shattered Macy’s previous celebrity scent sales record, which had been set by Beyoncé Knowles in February 2010 with the launch of Heat in the same location. Knowles’ scent was said to have yielded $3 million at Macy’s in the first month.

During Bieber’s appearance at Macy’s — punctuated with a chorus of screaming onlookers — the first 325 fans who purchased the Someday gift set, priced at $135, got their photo taken with the Biebs. Someday quickly inspired parody. Bieber and “Late Night” host Jimmy Fallon filmed a spoof TV commercial for the scent featuring the duo in matching outfits and the singer’s signature manicured mop. They took turns whispering “Somedays” into the camera, including, “Someday we’ll have robot arms and eat tacos made out of light.”

The real commercial, directed by Robert Lee, was filmed in a gravity-free cabin of a Boeing 737 NASA training jet. It is scheduled for broadcast from Black Friday after Thanksgiving through Christmas. Model Dree Hemingway appears in a print ad shot by Terry Richardson.

The fragrance, like Bieber, is now on tour. Earlier this month, Someday began rolling out to more U.S. retailers, including Dillard’s, Boscov’s, Belk, Nordstrom, Lord & Taylor, Sephora and Ulta, and in Canada — Bieber’s home turf — Shoppers Drug Mart. International markets also are on deck, including the U.K., Australia, New Zealand and Germany.

Someday, created by Honorine Blanc of Firmenich, is billed as a “fruity gourmand” formula, meant to appeal to the 14- to 18-year-old core of Bieber’s fan base, according to the producer and licensee Give Back Brands, a company designed as a platform for entertainers to raise money for good causes, according to its founders, Robert Hollander, a branding expert, and Paul West, a cosmetics industry veteran. The proceeds of Someday are earmarked for a list of charities, including two of Bieber’s favorites: Pencils of Promise, which builds schools, and the Make-a-Wish Foundation.

Hollander, president of Give Back Brands, stated, “Justin Bieber Someday has launched to numbers that are nothing short of astounding, making this the industry’s single most successful celebrity fragrance launch. Our retail partners simply cannot keep it in stock. Justin has truly made his mark on the fragrance industry, and we could not be more proud of this partnership.”

West added, “Justin Bieber is a phenomenal talent with incredibly devoted fans; it’s no surprise that Someday is topping the sales charts.”

The scent’s total distribution is estimated at 2,500 doors.

In late May, Bieber, who responded to questions about the scent via e-mail from Japan, where he was performing, wrote, “Let’s be real, the way a girl smells is very important to a guy! I have such a deep connection with my fans, so creating a fragrance that I personally love is another way I can bring them closer to my world.”