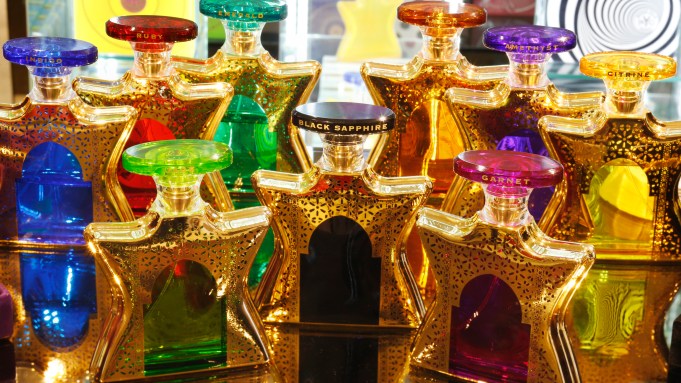 NEW YORK — Early indie fragrance player Bond No. 9 is trying to differentiate itself in a sea of new niche brands and increasingly competitive retail spaces.

The brand will open its sixth freestanding boutique today at The Venetian in Las Vegas — the first store outside New York and the start of an ambitious plan that will see the opening of 20 more stores over the next five years.

“I have to change the way I sell. I’m not changing the way I make [perfume],” said Laurice Rahmé, founder and owner of Bond No. 9, of upping the company’s global store count from five to 25 doors. A lease has just been signed on a 700-square-foot space in the Aventura Mall in Aventura, Fla., that will open next August, and there are already plans for a second store in south Florida. Globally, three stores will bow in the Middle East next fall, with a plan to open two doors a year in key markets.

This is an integral part of the 13-year-old company shaking up its business model, based on taking a more direct-to-consumer approach in reaching customers. The company, which largely names its fragrances after New York neighborhoods, generates 80 percent of its business via wholesale partners and 20 percent from its own freestanding doors and web site at Bondno9.com. In five year’s time, the goal is to have a 50-50 split between retail and wholesale sales, Rahmé said.

The reason is twofold. Beyond the obvious — removing the wholesale factor results in higher margins — Rahmé wants more control over how the brand is presented in third-party retail environments.

To do this, she’s cutting down U.S. distribution to just 50 doors. This includes 40 Saks doors (where the retailer confirmed Bond No. 9 is the number-one selling fragrance brand) and 10 Bloomingdale’s stores — as well as a heightened focus on building the brand’s own retail footprint. Rahmé has already pulled the brand from 20 Nordstrom doors because “we could not express ourselves the way we wanted to.” The biggest market for the company is the U.S., followed by the U.K, Middle East, Italy and Germany. Globally, the brand has 300 points of distribution.

“I don’t want to be sold somewhere with another 100 indie brands. When consumers are confused, they don’t buy. I need my point of difference,” Rahmé stated.

Her point of difference is her retail outposts, namely the 3,000-square-foot Bond Street flagship, which she called the “largest monobrand fragrance store.” The shop has floor to ceiling mirrored library walls lined with fragrance, a candle bar, and a 16-chair table where customers can custom blend fragrance. An elaborate chandelier hangs from the ceiling and standing versions are placed throughout the store, and designed mannequins that mirror the bottles are “dressed” with the look of new bottles.

She has no intention of changing the product or packaging, and will continue to expand the brand’s already vast selection of about 70 fragrances. Retail sales from Bond No. 9’s freestanding boutiques and e-commerce site are up 12 percent year-over-year, and she estimates the company will do overall sales of $60 million this year. Rahmé said the wholesale business will be flat this year due to the closing of the 20 Nordstrom doors.

She compared the rise of the indie fragrance to the designer boom in the Nineties.

“Now it’s the same phenomenon with the niche business. It’s becoming like a ‘designer world’….If niche is becoming a designer world, I’m out of it,” Rahmé said. “The industry is making the same mistake with niche that the made with designer — meaning too much, too many, no editing and no selecting. It’s not presented the right way.”

Her boutiques are the first way she aims to stand out in an increasingly crowded landscape, but so is product and experimenting with higher price points. Mid-September saw the launch of Soho, this weekend will see the release of Sutton Place, a $350 men’s scent with a “cigar toned maduro” brown faux snakeskin bottle, and next week, an extension of the Dubai line.

Bond No. 9 first introduced an oud-heavy, three-scent Dubai collection last fall — Indigo, Emerald and Ruby — which were all created in Dubai (the main collection is produced in New York). The trio exceeded sales expectations and Rahmé added an additional three Dubai scents this spring — Citrine, Amethyst and Amber — with another three set to come out Tuesday. Dubai III contains Black Sapphire, Jade and Garnet.

“Over there [in Dubai] they use the real stuff. There is very little alcohol and a lot of oil. They used local ingredients,” Rahmé said of the collection, which has a 30 percent perfume oil concentration and retails for $550 a bottle. This is 40 to 50 percent more expensive than the main line, which contains an 18 to 20 percent perfume oil concentration and ranges from $350 to $380.

“It’s the packaging, the fragrance, the concept and the story. It’s not enough to just have the juice. We’re lucky we have New York as a story and now we have Dubai as a story. That’s our mission statement; to continue to be the scent of a place,” Rahmé said. She added that the Dubai collection will have its own separate counter — from the main collection — at Harrods in London, and she’s in the midst of negotiating similar deals with other retailers.