Bond No. 9 Takes the High Line

Bond No. 9 fragrance is based on the scent of herbs and flowers growing in the High Line in New York. 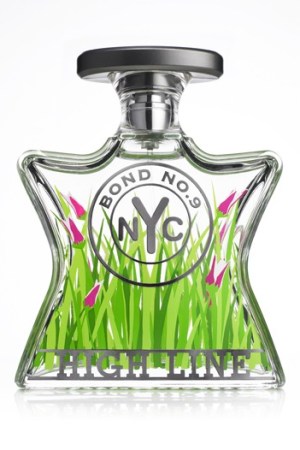 The High Line, the serpentine-shaped, above-street-level garden that snakes alongside the Hudson River, has been showered with support from designers in the neighboring Meatpacking District. Now, New York’s latest park will have its own fragrance.

Fragrance entrepreneur Laurice Rahme, the founder of Bond No. 9, has created fragrances based on 40 neighborhoods and locations around New York. She has elevated her game by producing a scent based on herbs and flowers growing in the High Line, once a former freight rail structure, which hovers 30 feet above the streetscape and winds its way for 1.45 miles from Gansevoort to 34th Streets. Only the first phase of the garden, stretching north to 20th Street, is finished. The second portion, ending at 30th Street, is expected to open in early 2011, according to Friends of the High Line, which manages the park in concert with the City Parks Department. The third and final piece, which winds around the 34th Street rail yards and stops within sight of the Jacob K. Javits Convention Center, is now the subject of negotiation between the city and CSX, the rail company that donated the first two sections of the structure to the city.

In 1999, when the rusting hulk of the elevated tracks was in danger of demolition, two neighborhood residents, Joshua David and Robert Hammond, formed the Friends of the High Line and rallied others in an alliance with the administration of Mayor Michael Bloomberg. The design of the garden was turned over to Dutch horticulturist Piet Oudols, a leader of a natural garden movement. Reached in a telephone interview last week, Oudols described the movement as “where design meets ecology.” Ecology is not only essential, he noted, but his goal is “to make it beautiful.”

Roughly half of the foliage on display in the High Line comprises plant species originally found growing there. “Our park is more natural and rustic,” said David Hammond, comparing the High Line with typical gardens blooming with more decorative flowers.

Oudols pointed out that using indigenous and perennially flowering plants means that a garden will bloom longer throughout the year. On the High Line, he has staggered the plantings so there is a succession of plants in bloom, forming a cavalcade of changing color through the months. Since his gardens have the capacity to keep blooming, the message is, “It’s not over yet, it’s still there.”

Asked about the Bond fragrance, he replied: “Scent in a garden is very essential.” By putting that essence in a bottle, it means that nature can be savored “in places you normally do not see it.”

The task of creating that effect was undertaken with Rahme, who described the resultant product as “the first railroad fragrance.”

Laurent Le Guernec, senior perfumer at IFF, went to work with the goal of not only capturing the prairie wildness of the foliage’s stark beauty, but also the gritty urban poetry of the site, with steel rails snaking through the grass, the Hudson River waterfront, the dour colors of the old industrial buildings nearby and even the rows of huge hooks left over from the meatpacking days. For the river, Le Guernec added ozonic notes and the surrounding structural metal was denoted by aldehydes.

But much of the formula came from what he found growing in the park — purple love grass and Indian rhubarb in the top note, along with the familiar bergamot. The garden’s red leaf rose, tulip and grape hyacinth was used in the midrange along with orange flower water. The High Line’s bur oak is in the base. Le Guernec said he found 200 species that grow throughout the year— “that’s a lot.” The finished product has 11 notes, each composed of numerous ingredients. He compared it with building “a fun floral in a very modern, industrial way.”

Rahme described the unisex scent as “a marine floral green fragrance.” She added, “I love the balance between the water and the green.”

Priced at $145 for 50 ml. and $220 for 100 ml., the fragrance will launch March 1 at Saks Fifth Avenue and in the four Bond No. 9 stores, then will roll out to 25 markets overseas on April 1. Rahme, who joined the Friends of the High Line, said 4 percent of the volume will be donated to the organization. She declined to divulge dollar figures, but industry sources estimate the fragrance could generate $4 million at retail in its first year.

It will be needed help for the Friends organization in support of the park, which runs up maintenance costs of $2 million a year, a number expected to rise to $4 million when the second phase begins. Considerable wear and tear is caused by hordes of visitors. An estimated 1.5 million visitors have climbed the steel steps since the park opened June 9, with nearly 25,000 tromping through on a summer’s day.

These figures leave Rahme awestruck. “Everything they are doing is what our industry should be doing,” she said, referring to the fragrance business. “I like the recycling; I like the urban movement. The fashion industry got it,” an allusion to support from designers such as Diane von Furstenberg, Alexander McQueen and Moschino. “Our industry doesn’t have it.”

As for the 1.5 million visitors, Rahme concluded: “We would be happy to get 10 percent of that” as potential High Line fragrance customers.