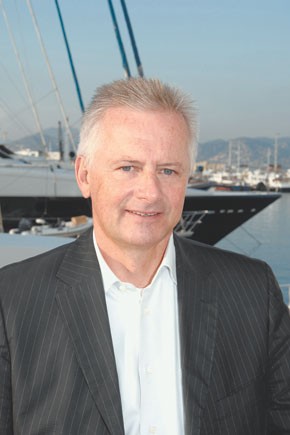 GENEVA — While competitors make moves to diversify their beauty lineup, P&G Prestige Products, a robustly growing division of the Cincinnati, Ohio-based consumer giant, intends to continue to harvest its growth mainly through fragrance.

In the wake of Coty’s acquisition of Del Laboratories earlier this week in order to add color cosmetics, P&G Prestige Products reported it would retain its focus as a fragrance-centric firm for another couple of years.

In an exclusive interview, Hartwig Langer, president of P&G Prestige Products, unveiled the firm’s core strategy at its headquarters here, situated on the picturesque banks of the Rhône river.

“I think there is a huge growth opportunity in the prestige fragrance business and that is what we are currently pretty good at,” said the soft-spoken Langer, who was dressed in a white shirt and blue jeans, both by Hugo Boss. “We can focus and concentrate on more growth before we get too broad too quick.”

According to Langer, the rule P&G Prestige Products adheres to for its scent launches — “fewer, bigger, better” — also can be applied to the company’s modus operandi.

“From a single-minded growth point of view, there is no necessity to expand into other beauty categories,” he added, noting that there is some expansion, such as Dolce & Gabbana’s expected entry into color cosmetics, as part of the development of a fragrance brand.

The 15-year-old firm has recorded an impressive growth spurt, particularly over the past few years. P&G Prestige Products’ annual fragrance sales total $2.5 billion at wholesale, and tracking firm Euromonitor reported that the firm grew an average of 28 percent annually between 2001 and 2006. (See related stories, page 8.)

“They have been performing stronger and faster than their competitors,” said Diana Dodson, senior industry analyst, cosmetics and toiletries, for Euromonitor.

Key to P&G Prestige Products’ future success, said Dodson, was the way it is carving out its slice of the premium fragrance market.

“Eastern Europe is forecast to be the fifth-biggest, and fastest-growing market for premium fragrance sales by 2011, and P&G is already performing well there — it’s their second-biggest market outside Western Europe,” Dodson said.

According to a Euromonitor forecast report for 2006 to 2011, premium fragrance sales in North America are predicted to remain stagnant, while Western Europe’s average sales gains will be 1 percent annually.

P&G Prestige Products’ other strength was its fast-growing men’s fragrance category, said Dodson, with its sales measuring nearly as much as women’s.

Langer insisted that the company isn’t planning to create or acquire color cosmetics and skin care lines to drive sales. He refused to give credence to rumors that P&G is angling to buy Clarins or any other company, and dismissed such claims as speculation “like the story of Loch Ness.”

But other industry insiders maintain that P&G Prestige Products could be ripe for such an acquisition, the likely targets being Estée Lauder or Clarins.

Bear Stearns analyst Justin Hott said, “Estée would be a good, grand fit.” Referring to recent speculation that P&G has plans to buy Lauder, he said that company would remain the “elephant in the room,” particularly when Fabrizio Freda, a former P&G executive, takes over the helm there.

He added that P&G could bring a lot of organizational structure to Lauder, but he expected the consumer products giant to continue to tackle smaller acquisitions, similar to DDF, a skin care brand in its skin and personal beauty division. He noted P&G could spend $100 million to $200 million to buy a small brand and invest another $100 million in it to make it successful.

“They can turn a brand into a billion-dollar brand over time. If you combine Procter’s research and development with a smaller brand, that’s powerful.”

During a meeting with P&G executives Wednesday, William Chappell, an analyst with SunTrust Robinson Humphrey, asked if the firm had more prestige beauty acquisitions planned. The executives declined to comment on acquisitions, but said that its international and fragrance businesses present higher margins and more growth than the U.S. market. With Dolce & Gabbana and D&G cosmetics lines in the works and a steady new fragrance pipeline, P&G may have its hands full for the time being, said Chappell. He added P&G declared that the new Dolce & Gabbana fragrance performed well above expectations.

Meanwhile, Euromonitor’s Dodson elaborated on P&G’s buying muscle: “It’s not beyond the realm of possibility they would buy a company like Clarins or Estée, they certainly have the cash.”

Instead Langer said he envisioned immediate future sales growth blossoming from two key sources: the strengthening of its brands and the initiation of a strategy to revitalize the consumers’ shopping experience in-store, mapped by a two-year study pioneered by the firm.

“We have a strong belief and we have enough evidence that shows we can keep growing in the high-single digits or double digits in fragrance for another couple of years by reinventing the shopping experience and by focusing on our big brands and driving those,” said Langer. He added that brands in P&G’s Prestige Products portfolio that had 2 to 3 percent global share could be increased to 5 percent.

Carolyn Tasted, vice president of P&G’s global prestige products and market development organization, said the new shopping strategies — on which she declined to elaborate — were tailor-made to each retailer. WWD has learned that some of P&G’s retail partners in Europe and the U.S. employed the new retailing methods in time for the recent launch of the women’s scent, Gucci by Gucci.

But those retailers expecting to entice customers with a red Valentino lipstick on shelves may have to wait a while longer, as P&G is steadfast on its fragrances-only strategy for the time being. “There’s no reason for doing anything like that to gain extra growth. If there is an opportunity, let’s say, for building a brand — like we believe [there] is on Dolce & Gabbana [with the color cosmetic line] — it’s driven by that, it’s not driven by the need to have another growth opportunity,” said Langer.

Dodson said P&G is more likely to parlay its men’s fragrance brands into other beauty categories, as it has done with Hugo Boss, while some Italian retailers say it will only be a matter of time before the Gucci and Valentino fragrance brands are expanded to include makeup lines.

Among its 23 brand-strong portfolio, P&G Prestige Products currently has skin care line Boss Skin and the Anna Sui color cosmetics line, produced as a joint venture with Albion, a Japanese company. Next year, P&G is expected to launch Dolce & Gabbana’s long-awaited makeup line. In a recent interview, Stefano Gabbana said the line’s packaging was finished but he was finessing color hues with makeup matriarch Pat McGrath. McGrath, who presides as head makeup artist over a number of fashion week’s most important shows, was hired by P&G’s skin and personal beauty division to oversee product development in mass lines Max Factor and Cover Girl.

A prime engine that’s powering P&G’s Prestige Products sales results, the Dolce & Gabbana brand has had three fragrance launches since it was acquired by P&G in 2006. Ranked as the division’s second-biggest fragrance brand behind Hugo Boss, Dolce & Gabbana fragrances are estimated by industry sources as generating in excess of $500 million annually at wholesale.

A new fragrance line is in the works for the sportier and younger D&G brand, which is expected to be merchandised at a lower price point to appeal to a younger, trendier urban customer. “There is already an amazing project under way for the D&G line of scents, and everything for that line will be different,” said Gabbana.

With P&G’s till-lining sales comes a fortified distribution strategy. P&G Prestige Products always has declared a tightly selective distribution plan for all of its fragrances, whether it is classified as a luxury, premium, lifestyle or regional scent. But some say P&G’s products also have been spotted in mass channels at retailers such as Walgreens, alongside other luxury fragrance brands including Dior.

In Procter’s defense, Dodson said, it is very hard for large beauty firms to keep an all-seeing eye on distribution.

Langer declared a shopper looking for a luxury fragrance would seek it in a plush environment. “Luxury products need to be put into an environment which fits…the equity of the fashion house and the brand, and fits…the equity on what the consumers expect [and] where they buy products,” said Langer.

Distribution on brands Gucci and Dolce & Gabbana was cut by 25 percent when P&G Prestige Products took on the licenses, and as Langer noted, sales increased by double digits quickly.

On the American retail scene, distribution has proved to be a tougher beast for P&G Prestige Products to tame. Asked whether he thought P&G had lost out on prime department store space for lack of skin care and makeup lines, Langer is adamant the company would earn its merited prime position.

“It is a question that we have to overcome. The current paradigm is that, yes, you have to have more, but it’s a question of really looking at the strengths of the equity of the brands and turning them into a masterpiece in the stores. With more successes and stronger equities of brands, we will get there. We have been increasing space and we are permanently negotiating for bigger space,” Langer said.

Constructing its brands to be robust, cash-churning entities that, according to the firm, “resonate with consumers and speak the dream,” has prompted criticism from some industry insiders. Industry speculation that P&G builds its licenses too aggressively and that it could eventually lead to brand burnout prompted a smile out of the unflappable Langer.

“This doesn’t worry me at all. It’s funny: When I got into this industry, it was ‘P&G moves into television [with fragrance ads] — this is killing all of the brands.’ Today, everybody is in television,” said Langer who swiftly steered the conversation back to his premise of driving sales growth through his scents.

“As long as the brand has a lower share — 2 to 3 percent — you can drive it to 4 to 5 percent. It has nothing to do with increasing distribution. This is a fewer, bigger, better strategy that’s also going to be longer.”