MILAN — Long gone are the days when Bulgari hosted lavish parties across Italian dreamy destinations and venues. The company’s physical events might be a victim of the pandemic, but the Roman jewelry house instilled its passion for conveying the multiple facets of the Italian lifestyle in its new collection of fragrances, called “Allegra,” or “joyous” in English.

It’s a description that also fits the mood of Bulgari perfume division’s managing director Luis Miguel Gonzalez Sebastiani, who, despite being confined behind a computer screen for a Zoom call, enthusiastically explained that the launch of the new fragrance pillar signals a brand transformation for the company.

In particular, the Allegra collection of five scents, which can be customized with Magnifying essences, represents a key step in Bulgari’s brand-elevation strategy set in motion by Gonzalez Sebastiani upon his arrival at the company in 2017. Strategically, the line aims to bridge the gap between Bulgari’s Splendida and Le Gemme collections, positioned in the medium-high and extreme high-end segments, respectively.

“Le Gemme is the pinnacle of our olfactory creation. In terms of price positioning it is at the top of the market, while as for the clientele, it really resonates with Middle Eastern consumers, who are connoisseurs and very confident in wearing this kind of fragrance,” said Gonzalez Sebastiani. “So we realized we are strong in that area, we are strong in the medium-high segment but we had a gap in the market where 100-ml scents are sold around 200 euros, which is a market that is really growing fast.”

In addition to enhancing its competitiveness in that segment, the launch intends to further expand Bulgari’s international reach, specifically targeting Chinese customers. “China is growing exponentially and Le Gemme is not a line that can directly [resonate] with this market, olfactory speaking. So being a luxury brand with an international distribution, we needed something that could talk with this clientele from an olfactory and conceptual point of view,” he said.

Yet the executive claimed that overall Allegra can resonate with many types of customers, as it was designed to evoke Italian experiences and emotions via different olfactory families, ranging from floral-oriental scents that for Gonzalez Sebastiani could appeal to European and Middle Eastern clients, to citrusy fragrances that could work best for the Chinese and American clientele.

Created by master perfumer Jacques Cavallier, the Allegra collection includes “Riva Solare,” evoking a day on the Italian Riviera by blending citrus, orange blossoms, neroli and mandarin; “Fiori D’Amore,” nodding to love stories through a mix of Turkish and Bulgarian red roses and raspberry; the gourmand “Dolce Estasi” recalling the experience of stepping into local pastry shops through the heliotrope powdery floral accord combined with citrus and musk; “Rock’n’Rome,” whose floral fruity aroma of osmanthus and apricot was inspired by aperitivos in Rome, and the chypre fragrance “Fantasia Veneta,” nodding to lavish carnival parties in Venice via a blend of patchouli, red peach accord and a hint of vanilla.

All experiences are also visually represented in an advertising campaign fronted by rising artist and model Solange Smith.

The point of difference of the collection is the introduction of five Magnifying essences, added to tap into the customization trend, which is becoming increasingly important for Millennial and Gen-Z customers.

For Gonzalez Sebastiani, personalization is essential for empowering customers in finding the right scent for them and offering a more engaging experience. “We have found the way to help shoppers in the customization process without being too complex, which is the problem of layering when it comes to scents,” he said.

To wit, he highlighted that while the practice of layering scents leaves the door open for too many possible combinations — not always successful — the Magnifying essences intend to simplify the customization journey and facilitate consumers, as all of them are designed to blend with any fragrance. In particular, the Magnifying options — which can be also be used as stand-alone scents — feature rich concentrations of natural ingredients such as musk, bergamot, rose, vanilla and patchouli. 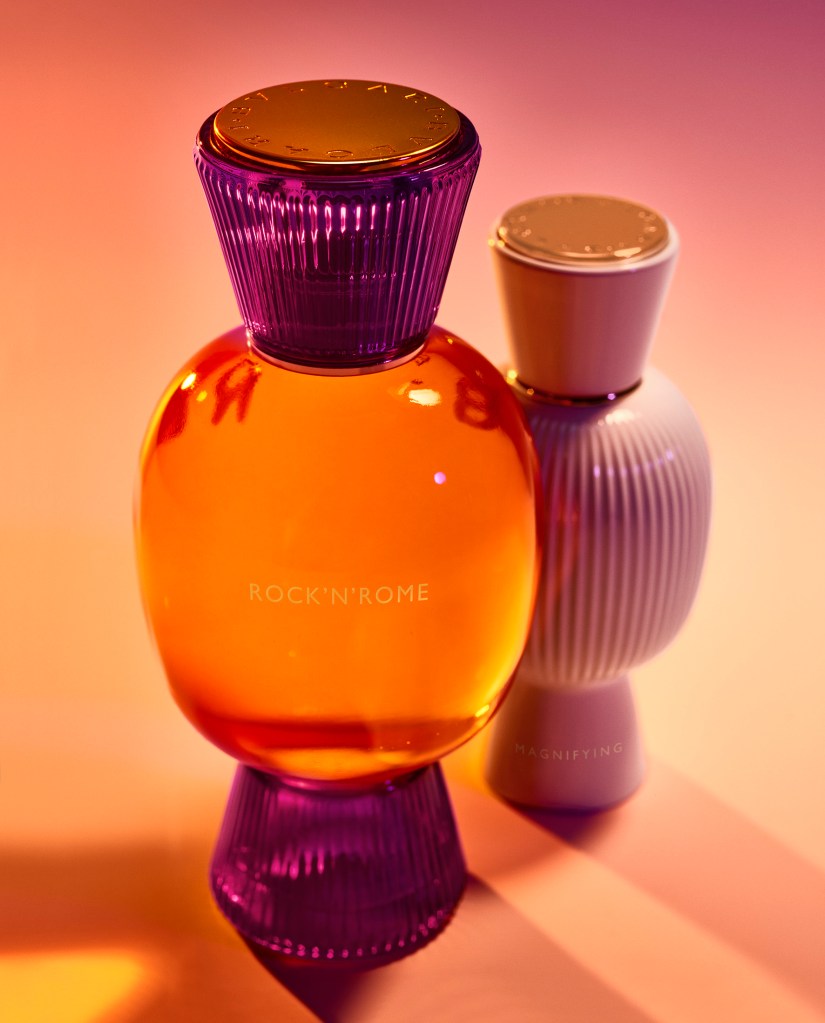 Sold separately, the Allegra eaux de parfums are available in 50-ml and 100-ml sizes at 140 euros and 200 euros, respectively, while the single 40-ml format of the Magnifying essences is priced at 160 euros.

The rollout of the collection kicked off at selected doors, including Bloomingdale’s and the Bulgari store on Fifth Avenue in Manhattan. In Asia, the range launched at Tmall, Grand Gateway Shanghai, Takashimaya in Singapore and Hanguang Department Store in Beijing. In the Middle East, Bulgari has signed an exclusive with Sephora, which will carry Allegra in 20 units across the UAE region this year.

The collection will subsequently roll out in other markets, depending on the COVID-19 restrictions imposed by each country. For instance, Allegra will be available in Europe only in May. As for travel retail, which has been significantly impacted by the pandemic, Gonzalez Sebastiani said that Bulgari will continue to be loyal to its commercial partnerships and expects the channel to gain traction again in the second half of the year. The Allegra rollout in this channel will start first in Asia and the Middle East and then in Europe.

Overall, in 2021 the collection will be available at roughly 100 doors globally, almost half of which will be in Asia. Industry sources estimated that the Allegra line will generate sales of around 10 million euros in its first year.

The selective distribution mirrors the company’s commitment to rationalize its retail footprint in order to continue to elevate the image of the brand.

To wit, last year Bulgari’s fragrance division cut 30 percent of its distribution across any channel down to 18,000 doors worldwide. “For us, COVID-19 has been an accelerator for the brand elevation, which impacts distribution, too. We will progressively continue in this direction. We aim to cut almost half of our current global doors by the end of 2022, reaching roughly 10,000 units,” said Gonzalez Sebastiani.

The executive added that the market that will be impacted the most by this strategy is the U.S. “Two years ago we were distributed in 1,500 doors but in the long term we aim to have 200 units in the country… Of course, this has direct impact on sales but for us it’s much more important to support our brand elevation strategy across the whole company. Bulgari’s perfumes represent the entry point of the label: you can’t be vastly distributed and then sell 100,000 euro-priced jewels. It’s a matter of coherence in terms of the audience we’re talking to,” said Gonzalez Sebastiani.

In the meantime, the company continues to enhance its sustainable commitment, aimed at minimizing the environmental impact of its scents.

“We poured into Allegra all the learnings of the past years,” said Gonzalez Sebastiani, particularly referencing the idea of eco-conception. “Usually, five years ago, when you developed a fragrance, you were completely free creatively speaking in terms of raw materials and design, and only after conceiving the project you wondered how you could make it less impactful on the environment. Now it’s the opposite, that’s the starting point,” he said, underscoring that sustainable practices informed both the sourcing of ingredients and the packaging.

For instance, 96 percent of the Allegra flacon is made of glass. Vividly colored in combinations including gold-azure, pistachio-pink and amber-purple, the sculptural bottle recalls the rounded shape of the house’s signature cabochons stones, while the fluted cap and base nod to Roman columns. The Magnifying flacon features the same shape but in a smaller, slender and pristine version, winking to the way white harmonizes with any color.

The remaining 4 percent of the bottle comprises a plastic pump and a decorative Bulgari aluminum plate, which can be easily unscrewed and separated to facilitate recycling.

Secondary packaging is made of cardboard materials from responsible sources. In particular, the company has worked with a partner that creatively repurposes the byproducts of Italian lemons to produce a type of paper that needs less printing and can be recycled more easily. 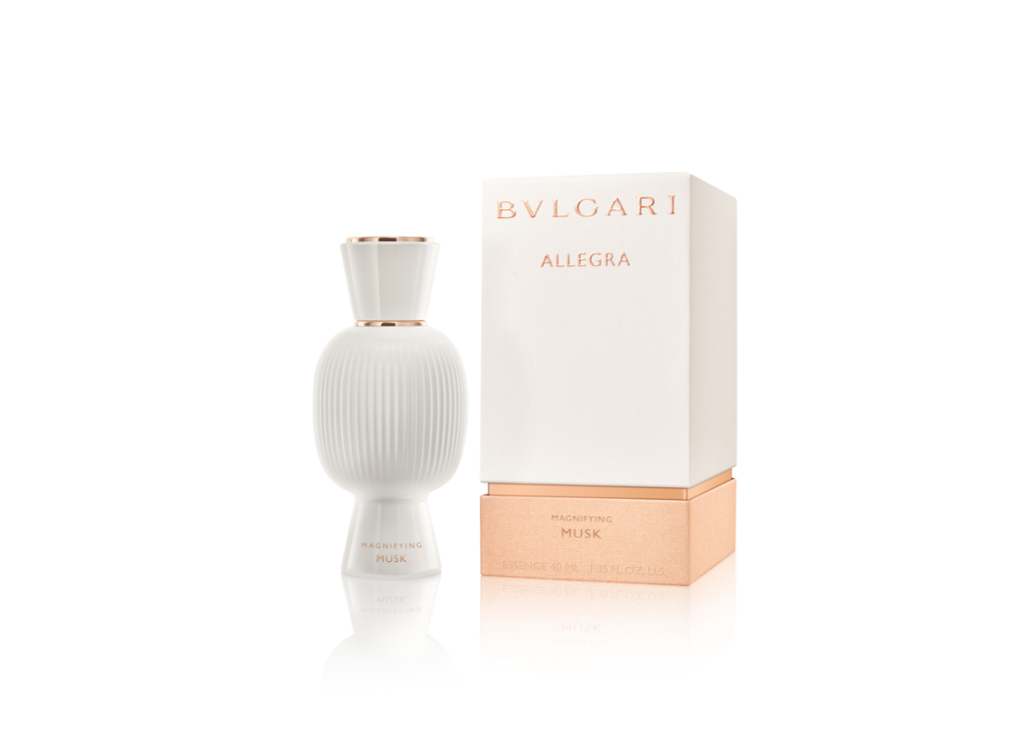