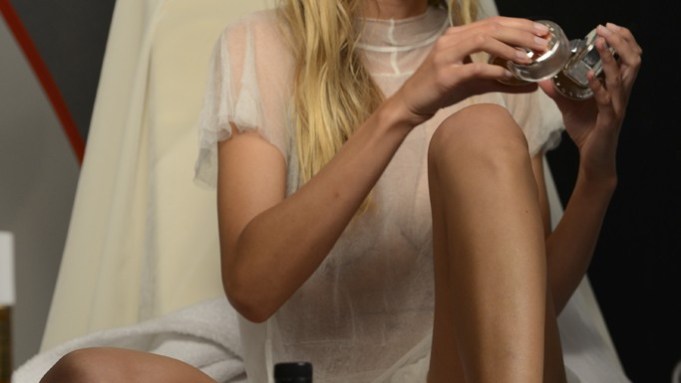 MILAN — Bulgari’s latest fragrance is crystal-clear. The Italian jeweler, part of LVMH Moët Hennessy Louis Vuitton since October 2011, is introducing Omnia Crystalline eau de parfum, an upscale rendering of its 2005 eau de toilette of the same name, which the company said is the number-one seller of all its fragrances.

“Crystalline [edt] is the fragrance that has the broadest appeal worldwide, it does well in all markets,” said Valeria Manini, managing director of Bulgari Parfums, adding, “The addition of an edp brings an additional richness and depth to the Crystalline line.”

Alberto Morillas of Firmenich, the creator of the entire line of Omnia scents, also developed the new edp. “The objective was to have a version of Crystalline that [nearly] 10 years later could be much more rich, luxurious, dressed up… while maintaining the same signature and appeal of the [original] fragrance,” he said. The scent opens with notes of mandarin and lotus flower — a long-standing Asian symbol of purity — over a heart of orris concrete and heliotrope and a base of sandalwood, Siam benzoin and musk.

Morillas described the edp as the most feminine of the Omnia juices, one that was sexy but never vulgar. “It’s a second skin,” he said, adding, “This is not just a more concentrated version, it’s really a totally new approach for this creation, tied to new, really unique and exclusive ingredients that fit in with Bulgari’s modernity.”

The fragrance hits stores in September worldwide, reaching about 22,000 doors. While Manini declined to comment on sales projections, industry sources estimated the entire Omnia portfolio at about 120 million euros annually, or about $158 million at current exchange, and speculated that the Crystalline edt and edp could together bring in about half of that, once the new scent has spent a year on counter.

Crystalline edp will come in two sizes: 40 ml. for 69 euros, or about $91, and 65 ml. for 85 euros, or about $112. The bottle follows the design set out by previous Omnia fragrances, with pearly interlocking cylinders inscribed with the Bulgari name.

The campaign shows fair-skinned Lithuanian model Edita Vilkeviciute clutching the scent against her dewy bare skin, her blonde hair loose and capped with a diamond tiara, a pink gold ring with delicate pavé diamonds visible on her index finger. With stills shot by photographer Liz Collins and a video directed by Sonia Sieff, the images are intended to suggest natural beauty and a soft, understated sensuality.

Manini said Bulgari is investing heavily in digital communication surrounding the fragrance, while continuing to promote the edp through more traditional formats. “We’re going to put a lot of emphasis also on sales points,” she said, noting the goal was to give clients the feeling of closeness to the brand while preventing the luxury scent from feeling inaccessible.