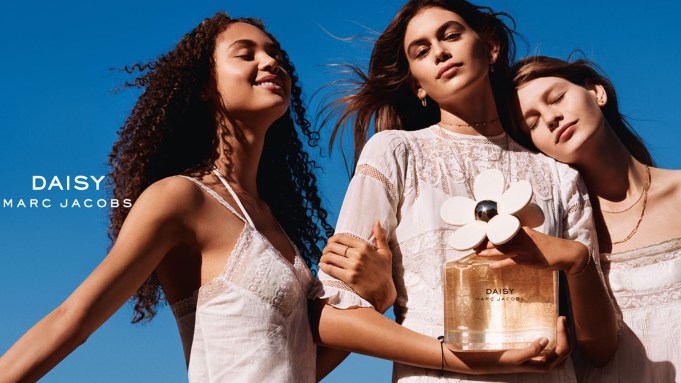 Bella Hadid and Amanda Steele are probably not the first people who come to mind when one thinks of Bulgari.

Especially the latter, who is among three influencers tapped by Bulgari Parfums to help launch its new Omnia Pink Sapphire eau de toilette — the pinkest and poppiest scent the brand has ever put out. Described as a “sparkling burst of citrus,” the fragrance is Bulgari’s first specifically targeting a Gen Z customer.

Working with mega-influencers like the above — as well as Margaret Zhang and Madison Beer, both of whom will join Steele in getting the word out about Pink Sapphire via their social media channels starting April 2 — has become a core part of the brand’s perfume business, said Luis Miguel Gonzalez Sebastiani, general manager, Bulgari Parfums. Created by master perfumer Alberto Morillas, the scent hits counters on Thursday and will see a widened Macy’s distribution as a way to better reach the brand’s target customer.

Following in the footsteps of Marc Jacobs, Dior, Hermès, Ferragamo and Coach, the brand is the latest luxury fragrance house to prioritize the social media set, adopting a largely digital first marketing strategy to attract the new generation of beauty consumers.

Linda G. Levy, president of The Fragrance Foundation, coined this a bona fide trend industry-wide. What started as a push for the above players to turn their attention to Millennials, she explained, has progressed to a heightened focus on Gen Z. She pointed to Hermès’ Twilly d’Hermès, Ferragamo’s Amo Ferragamo and Coach Floral, fronted by Chloë Grace Moretz, as a few recent examples of fragrances designed to lure this younger customer.

“Most [of these scents] are pink and cute, but this is what’s happening without question,” Levy said, adding that brands like the above are “doing everything” on social media in order to capture or “really bring out” that entry-level fragrance buyer. She cited Bulgari specifically, starting with last year’s release of Goldea the Roman Night, and as of this week, Omnia Pink Sapphire.

“It’s one thing to have a star getting involved and it’s another to really maintain that. They are really making real strides,” Levy said of Bulgari’s efforts.

According to Levy, Marc Jacobs is also making real strides, upping the ante on its already successful Daisy franchise. The brand is readying for the release of Daisy Love, the latest addition to the Daisy family, which bows next month.

Daisy — arguably the pioneer industry-wide of targeting Gen Z with Marc Jacobs’ release of the pillar in 2007 — has not only remained a best-selling global fragrance franchise for over a decade but saw a surge in business last year that, according to NPD, brought the scent from a top 10 to a top five women’s brand in the U.S. (Morillas is also the nose behind Daisy.)

It’s hard enough to sustain relevancy in an ever-evolving global fragrance market for a decade, but to become even more relevant after 10 years is a feat. Levy said Kaia Gerber being named the face of the scent “enlivened things and really kickstarted” the business last year, a combination of an active social media presence and her status as one of the most in-demand models in the fashion and beauty industries.

Simona Cattaneo, chief marketing officer at Coty Luxury, which owns the Jacobs license, maintained that the successful evolution of the Daisy pillar was never about a reinvention of the core product — which has remained the same since its inception with the addition of flankers such as Daisy Eau So Fresh, Daisy Dream and, soon, Daisy Love. Instead, the brand reinvented the way it engaged with a younger generation by “radically changing the communication model” to speak to today’s Gen Z and young Millennial consumers.

“We’re really focusing on digital and influencers through three things: engagement, reach and frequency,” Cattaneo told WWD. For Daisy, engagement spans the generation of content with and by Gerber to leveraging the influx of user-generated social media content. “More people need to know about Daisy and consider buying it. When it comes to the reach, we boosted organic, paid reach…mostly through partnerships instead of one-off activations.”

For example, the brand’s fragrance arm shares an influencer platform with the fashion house, and is heavily involved in cross-promotion with retailers and the various Marc Jacobs platforms.

“There is an authenticity to the ambassador that creates this engagement. This is one key to success…Kaia [was ranked] a top model with the highest engagement rate in 2017,” she said, calling Gerber an “optimistic, free-spirited and smiling but at the same time, independent, clever girl,” who exactly mirrors who the Daisy Girl is.

Cattaneo maintained that social media followers for the Marc Jacobs fragrance Instagram and Facebooks accounts grew by 36 percent, on average, last year and the reach of the #MJDaisy hashtag increased by more than 800 percent.

For the launch of Daisy Love, a 30-ml. size bottle will be available for the first time exclusively at Ulta Beauty. Part a function of appealing to younger customers who are more “mobile” and want product on the go, the smaller format also retails for $58 — an ideal entry price for first-time fragrance purchasers.

“If you look at the bottles, they strike a balance between being timeless luxury, and at the same time, they have a whimsical twist and something surprising,” said Renaud Salmon, vice president of global marketing for Marc Jacobs Fragrances at Coty Luxury. “It’s product you want to take a picture of and post it on Instagram and share it with your friends.”

First came Goldea, a Millennial-focused scent unveiled last May. Hadid, who was recruited as the face of the floral musk while simultaneously appearing in jewelry ads for the brand, used her Instagram following of 13 million at the time to generate buzz among her twenty- and thirtysomething fans who fall squarely into the Millennial generation.

But that wasn’t young enough. There was still a giant swath of the population — about 25 percent — born in the late Nineties and early Aughts who Bulgari still wasn’t speaking to.

“The last few years…it was a bit stuck in time,” said Sebastiani of the perception of the brand’s fragrance portfolio when he joined the company to head the category in January 2017. Bulgari’s offerings overall, including jewelry, watches and accessories, recently “accelerated into a very serious [phase] of modernization,” becoming “much more contemporary” than ever before, he noted.

“As a global brand going into that direction, I thought the fragrance business was a bit disconnected from the contemporary reality of the fragrance industry,” he continued. “There’s an untapped potential, not just for the brand but for the industry. There’s a younger customer today who’s searching for more authentic product…and somehow the product we were putting in the market wasn’t speaking their language.”

Despite proven success communicating with clientele 35 and up, Bulgari Parfums still didn’t have a language, product wise, that resonated with Gen Z.

The release of Pink Sapphire, technically part of the Omnia collection that bowed in 2003, is the beginning of a repositioning of the whole pillar, Sebastiani said. The goal is to make Omnia the “first experience into the world of Bulgari Parfums.”

“[This] is our first concrete step into this repositioning.…We’ll adapt the language and our tone of voice to be more relevant to a more experiential and authentic clientele, living and breathing our joyful and interactive character,” Sebastiani added.

Similarly, Dior’s efforts with both Poison Girl and Miss Dior, where face Natalie Portman fronted the What Would You Do for Love #diorlovechain campaign last fall, have been successful in speaking to a more youthful fan base.

The corresponding call to action tied to September’s release of the new Miss Dior eau de parfum asked fans to create and post their own videos to social media answering “what they would be prepared to do for love?” Encouraging user-generated content elevated Dior’s efforts online to a two-way dialogue between brand and consumer.

Renaud de Lesquen, president and chief executive officer for North America, Christian Dior Couture and Parfums Christian Dior, said at the time that the eau de toilette skewed younger than anything the brand had ever done. In order to recruit this young Millennial, Dior relied on a predominantly digital first marketing strategy, a heavy e-commerce distribution and the introduction of a 30-ml. size with a $60 entry price.